The Black and White • January 22, 2020 • https://theblackandwhite.net/66849/news/administrators-host-second-community-conversation-on-race-equity/ 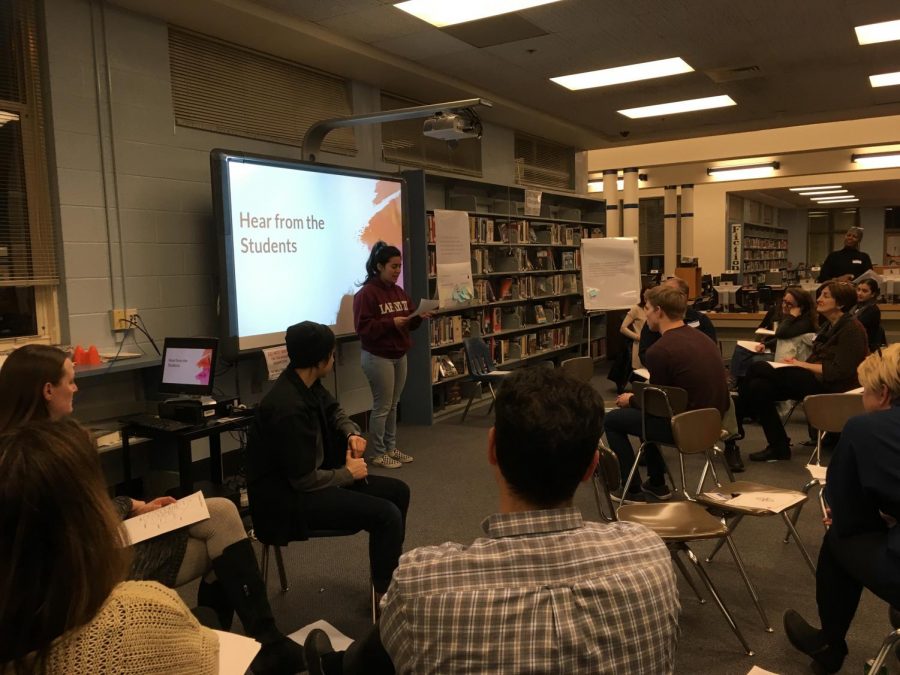 Senior Jordan Shaibani shares her testimony in front of parents at the second meeting aimed at discussing race and equity in the Whitman community.

In order to facilitate open discussion about racism and cultural intolerance among the Whitman community, Whitman’s Race, Equity and Wellness Coalition’s Parent Engagement committee and members of the MCPS Equity Initiatives Unit held its second meeting of a series of discussions surrounding race and equity Jan. 21 in the media center.

The first meeting in December largely focused on how parents can lead meaningful conversations on race in their communities and with their children. At the second meeting, the evening began with parents reading different excerpts of student writing, including poems and testimonials about their experiences with racism and discrimination at Whitman and in the community. After reading the excerpts, facilitators asked parents to write down what emotions they felt, what questions they had and something they wanted to do after reading.

Throughout the evening, parents participated in discussions and exercises that prompted them to talk about their own experiences with racism and discrimination, as well as those of their children. These discussions emphasized listening and understanding different points of view.

“My biggest takeaway from tonight was that every time there is a difficult conversation, it’s always important to have enough time to listen and reflect instead of listening to respond,” junior Charlie Imperial said.

Parents also had the opportunity to hear about students’ experiences with race and equity from seniors Harley Pomper and Jordan Shaibani. Both shared emotional testimonies about their own experiences with discrimination at Whitman. Their presentations sparked conversation among parents like Angela Hart-Edwards; the similarity of the presenters’ experiences to her own surprised her.

“I graduated high school in 1982,” Hart-Edwards said. “It’s eye opening to learn that minority students are experiencing what I experienced in high school, in 2020.”

Event organizers hope that these conversations will spark change in the Whitman community. Equity training specialist at the MCPS Equity Initiatives Unit Deanna Kuhney said this is important since the community has experienced multiple racial incidents in the past year. Administrators created efforts like OneWhitman to start conversations among the students and staff surrounding race and equity. Events like the parent meetings will hopefully supplement the work OneWhitman does, English teacher Omari James said.

“This is a desperate response to a growing crisis in Walt Whitman’s community,” James said.

While organizers deemed the event a success, Kuhney acknowledged that there’s still a lot of work to do.

“I think this is a good start. It’s certainly not the end,” Kuhney said. “I think that it all begins with dialogue and raising awareness so in that respect, I think that it was a successful session.”

The next meeting is scheduled for March.