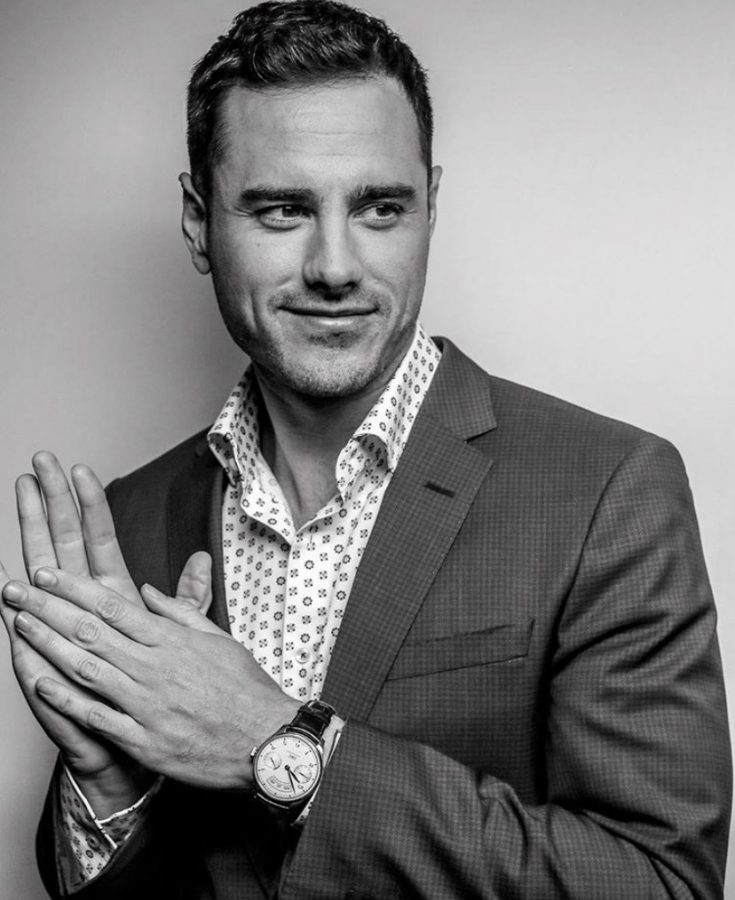 Ben Higgins was the season 20 lead of ABC's hit reality show "The Bachelor." I sat down to talk to Higgins about his experience before, during and after his time on national television.

Ben Higgins placed third on season 11 of ABC’s “The Bachelorette” in 2015 and then starred as the lead on season 20 of  “The Bachelor” in 2016. Higgins grew up in Warsaw, Indiana, attended the University of Indiana and moved to Denver, Colorado, when he was 24 years old. From a standard desk job in Denver to a friendship with host Chris Harrison to a coffee business, Higgins has had an exciting five years since his first time on national television.

Responses have been edited for length and clarity.
The Black & White: How did you find out about “The Bachelorette?” Why did you decide to do the show?
Ben Higgins: I had just moved to Denver from Indiana because I had a girlfriend who broke up with me and said, “You’re never going to leave home.” I moved to Denver without knowing anybody, and I took the one job that was there in front of me. I ended up being super sad, super lonely and incredibly heartbroken.

I was sitting in my office one day and an executive of the company walked by and said, “Hey, there’s a casting call in Denver for ‘The Bachelorette,’ and I think you need to do it.” I said, “I’m not going to a casting call,” and she said, “Well, if I apply for you, sign you up online and they call you, will you take it from there?” And I said I would. So she signed me up, and five days later they called and said, “Hey, we really want to pursue you to be on the show.”

It’s kind of a weird coincidence because I was on a plane three days before she talked to me, flying from Houston to Denver, and one of the older cast members from “The Bachelor” walked onto the plane. My buddy, who was a big fan, said, “He’s from ‘The Bachelor!’ He’s married,” and then he goes, “You should do this, do that show.” And I was like, “That’s funny.” But it hit me at that point that real people do the show, people from everyday life.
B&W: Can you describe the post-“The Bachelorette” decision process for becoming “The Bachelor?”
BH: The night I got kicked off of Kaitlyn’s season, I was sitting at the hotel bar in Ireland and Chris Harrison, the host, came down and asked, “Hey, how you doing?” I said, “This is a lot. Trying to process it all.” And he’s like, “Well, I just want you to know that you need to use this whole experience to enhance the life you already had, not change the life you had before. Big things are coming for you and you need to make some really hard decisions.” I think at that point it hinted at “Hey, you’re going to be ‘The Bachelor.’” But then it went dark on me for a few months — there were two months of not hearing from anybody.

Then one day I was in St. Petersburg, Florida, at my desk, and I got a phone call from Los Angeles. It was Elan Gale, an executive producer on the show. He said, “How would you like to be ‘The Bachelor?’ You have three days to decide.”

I called my family, and my family said, “If you want to do it, you should do it.” So I called him back and I said, “I’m going to be ‘The Bachelor.’”
B&W: Do you have any favorite memories or something that sticks out to you from your season?

BH: There’s an amazing team that works on that show. You travel with over 120 people to locations all around the world. You get to know the women involved and who they are as people, and that’s great. But a lot of your time is spent in a van or a bus or on a flight with a bunch of the staff that works on the show, and a lot of my favorite memories were getting to know them.

But I also got to do some crazy things. I let baby turtles off the beach in Jamaica. I visited Wrigley field on a private tour and went to the top of the scoreboard. I flew in helicopters and saw movie sets. Those are things that I’ll always remember.

There was one night in Jamaica two days before the final day. The three executive producers on the show had dinner set up on the ocean for us. We sat down for two hours and talked about life, shared stories and watched a storm come in. It was a very euphoric moment where I looked around and I was like, “This is nothing like I’ve ever thought my life would be.” A year before that, I was sitting in a cubicle and the bottom of a basement without any friends or any connection with anybody in Denver. It was a moment where it all hit me how much my life had been enhanced.
B&W: What was it like watching yourself back on TV? Do you think the show portrayed you accurately?
BH: I think I was portrayed accurately. If there was a moment where I thought, “That’s not what I meant,” it was never a major issue or a big storyline. Anything that was said that was maybe edited or cut was always minor in the grand scheme of the story.

My main story throughout “The Bachelorette” was “I’m a guy that’s trying to figure life out,” and admitting for the first time ever to myself, and to other people, that I felt like an outsider and that I felt unlikable and unlovable. It was the first time I admitted that to myself or anybody else, and I had to do it in front of 9 million people. On “The Bachelor,” it shifted to being confident in myself and understanding that I had something to offer the world.
B&W: What has post-“The Bachelor” life been like for you? What about your life has changed?

BH: Other than a really sad, terrible public breakup — which isn’t fun for anybody — the show has been great for me. After the show, there’s this moment when you realize how much attention and fame is being placed on you. I was on “Jimmy Kimmel Live!,” and he pulled me aside and said, “Hey, what are you going to do with the burden that is fame?” At the time I was fresh off the show, and I was trying to figure out what he said. I started to get this sense that for people who are famous, it isn’t fulfilling, or there’s something missing and that the attention is never enough.

Through a couple of other things, it finally hit me: what was I going to use this fame for? I was handed this platform, this opportunity to do something, and I was going to be irresponsible and a bad steward of it if I didn’t do something with it; I didn’t want to abuse it and take it for myself.

Post-“The Bachelor” life has been really fun, and I get to do some really great stuff. The coolest part of it has been seeing the impact that this reality television show can have. It’s one of the funniest concepts for me — eight years ago when I was 22 years old, I remember speaking at my university about addiction and isolation. I was terrible at it, and I don’t think anybody listened. But go on reality television, and now people take me more seriously than they did before; it’s because of the show that people actually want to listen.
B&W: What other ventures or opportunities have you pursued since your time on “The Bachelor?”
BH: If I lay these things out, the response people have is, “You’re so busy,” but I don’t feel that busy. I’ve been really fortunate to have opportunities to surround myself with people a lot more talented than myself.

I just started a second restaurant in Denver and will probably start a third next year. The only reason I was able to do that is that I have a buddy who’s an expert at operating restaurants. I get to do the fun part — talk about it, eat at it, promote it and sit in on random meetings that I don’t say a lot during. I also now have two coffee shops with my business Generous Coffee.

I also do the iHeartRadio “Almost Famous” podcast. Now, two years later, we have 50 million listeners in total, and it’s a huge piece of my life. It’s funny because it’s about pop culture, and my schtick is that I don’t know a lot about pop culture, but my co-host really loves it. I listen to her talk about it and that makes my job easier.

The final thing is that right now I’m writing a book. I get to share a story that I hope affects somebody and helps them feel less alone. In the book, the only part of the show that comes in is when I was on the show and I said, “I feel unlovable and unlikeable; I feel like I’m not going to connect with people.” When I said that, I got thousands of emails from people saying that they feel the same way. The book is really about how and why we feel disconnected. It’s a lot of other people’s stories, but it ties back to my own a little bit when it comes to some of my deeper insecurities and issues, and then some of the things that I celebrate about myself, but for the most part it’s not like a memoir.
B&W: The “Bachelor Nation” community seems really close. Is this true? To what do you attribute that?

BH: The show is filled with a bunch of “searchers.” They’re looking for answers in life, and they’re trying to mix life up a bit. You’re not going on this show if you’re in a relationship. It’s a bunch of people trying to figure out how to operate through this world, and then they have one thing that connects them: this crazy experience. If you’re there on night one, it’s not that crazy. But, if you’re in the top five, you’ve gone through some stuff that blows your mind — how cool, crazy and unpredictable it is.

You have this thing that connects you, and then Chris [Harrison] does a really good job of entering into the people in the show’s lives at the right moments, so you feel a closeness to him. Chris and I connected over golf. I love to golf, and so we would golf together as friends and we got to know each other better. But when I was dealing with confusion on the show, he was able to speak truth into me because he had been there.

Here’s the other part that I think is very obvious: it’s a bunch of young, single people who know they’re looking for somebody. There are the romance and connection that comes in as well where people are just like, “You’re single. I’m single. We’re the same age, let’s date.”