The Black and White • January 3, 2020 • https://theblackandwhite.net/66714/feature/helping-others-righting-the-wrongs/

“Helping others, righting the wrongs” 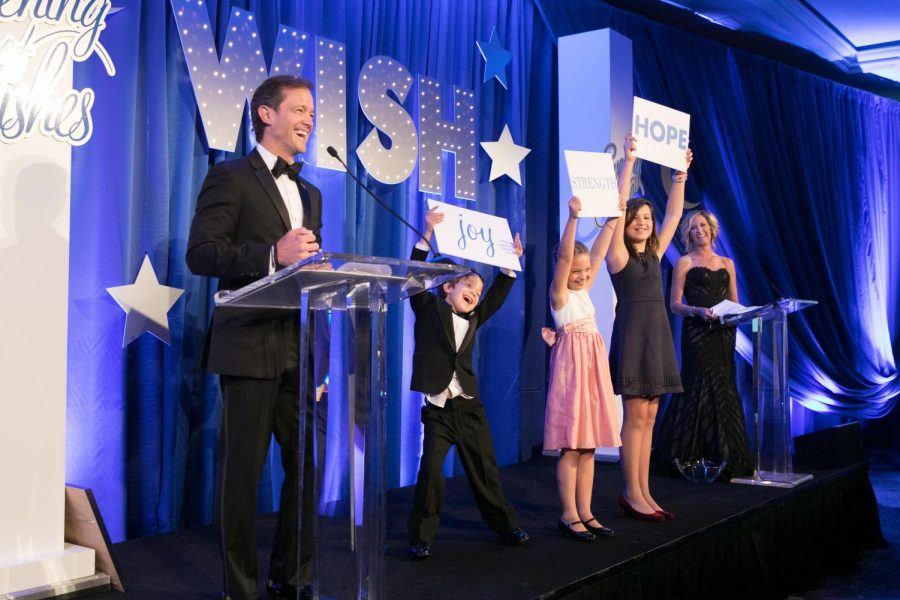 Mike Manatos and his children, including freshman Sienna, inspire courage at a Make-A-Wish Gala. Manatos loves to get his family involved with the foundation any way he can.

Mike Manatos (‘86) goes to work every day wearing the same pin on his lapel. Every morning, he fastens it on his suit jacket or sports coat in the hopes that people will ask about what that little gold wishbone with a ribbon tied around it means.

“It’s the logo for the Make-A-Wish Foundation,” he’ll respond to anyone who asks. “And I’m the chairman of the board.”

Manatos isn’t bragging about his position — he just wants to spread awareness about the organization everywhere he goes. Manatos leads the board of the Mid-Atlantic Chapter, which has its headquarters in Bethesda.

Founded in 1980, Make-A-Wish is a non-profit organization that grants life-changing wishes for children suffering from life-threatening illnesses. These wishes can be virtually anything the child wants, ranging from a celebrity visit to vacation in the Bahamas. Manatos works personally with children and families to grant wishes, and he also raises funds and awareness for the charity.

After 22 years of volunteering for Make-A-Wish, the board recently elected Manatos as chairman. In his new role, he works on all aspects of the foundation from programming to fundraising to marketing, among other responsibilities. He considers himself the “first among equals” as chairman, and he works closely with other board members to wish grant successfully, he said.

But working for Make-A-Wish isn’t his day job. As the president of his family-run D.C. lobbying firm, Manatos & Manatos, he has worked with high-ranking political figures, including former presidents Bill Clinton, George Bush and Barack Obama; former Speaker of the House Paul Ryan and current Speaker Nancy Pelosi. Manatos is honored to carry on his family name through his work as a lobbyist, he said, but he can’t think of many other experiences that he has enjoyed more than working for Make-A-Wish.

Working with Make-A-Wish is a gratifying experience for Manatos because he gets to connect with each family that he helps, he said.

“There are a lot of wonderful charities out there but very few can you touch and feel the mission when you volunteer like you can with Make-A-Wish,” Manatos said.

In 1997, Manatos stumbled upon a flyer in his dentist’s office for a Make-A-Wish triathlon. As an avid runner and athlete, Manatos excitedly signed up. Since that triathlon, Manatos has worked with the organization for the past 22 years and has personally helped make over 200 wishes come true. Wish granting is rewarding for him because he gets to actually see the results of his efforts, he said.

Though the lobbying firm is the official family business, Make-A-Wish has made its way into the family too. Manatos’ mother, Tina, also is involved with the organization.

“My mom and dad have always been my guiding light,” Manatos said. “Helping kids has always been a focus in our family. When I started to get involved with Make-A-Wish, my mom loved the mission and wanted to get more involved. She’s so passionate about granting wishes and becomes like a grandmother to each of the kids whose wishes she grants.”

For Tina, the ability to grant wishes with her son at her side is wonderful, and she’s grateful for the amazing opportunity to interact personally with each family.

“Being a volunteer is truly life-changing,” Tina said. “We give the families something very positive, pleasant and happy. It’s a great gift to us as volunteers, and doing it with my son makes it all the more special.”

As wish granters, Manatos and his mother talk to the family and connect with the child to determine which wish the child wants. The wish doesn’t just bring joy to the affected child, but their parents and siblings too — the foundation makes sure the siblings are never left out. The Manatoses also help the wish family with all the necessary paperwork so they aren’t overwhelmed.

Manatos has fond memories of every wish he has helped grant. He arranged for a girl to meet a unicorn and ride the horse, which became magical with the addition of a glittering horn, all around a cheering crowd. He turned a boy into a superhero to “save D.C.”  But one of his favorite wishes was for a boy who wanted to give back to the community. In the last few days of his life, he delivered PlayStation4 gaming systems to the children in the 22 rooms of the floor of the hospital where he was treated.

“It was just a magical moment,” Manatos said. “He could have done anything, but instead of using the wish for himself, he gave it to others, which is amazing.”

Manatos doesn’t think anyone performs charity work just because it makes them feel good; personal happiness is just a natural reaction to helping others, he said. Each time he grants a wish he feels proud and gratified, and he knows that others feel the same. He often feels like he’s “floating on air,” he said. But after the delight of helping out wears off, he begins to feel guilty.

“I truly feel that what I get out of granting wishes is almost as great as what the family gets out of it,” Manatos said. “I feel like I was just here to help, and yet I get so much reward. I can’t help but feel guilty.”

Manatos has other responsibilities along with granting wishes. As chairman of the Mid-Atlantic branch board, he stays focused on how he can he can improve the organization and help as many kids as he can. He’s always looking to become more involved with the job, he said.

When times are difficult at the foundation, he personally meets with almost every one of the 34 staff members to remind them of his appreciation for their work. He believes that all non-profits are facing a very difficult financial landscape, so he makes sure the Make-A-Wish staff knows that the board has their backs. In his first few weeks as chairman, he scheduled a retreat and structured new procedures that help members bond. He’s hopeful that these efforts will “solidify our Make-A-Wish family” and result in more children’s wishes coming true, he said.

Though he has become a leader in the foundation, he still continues his 20-plus year tradition of participating in an annual fundraiser for Make-A-Wish, where he uses every outlet he can to raise money for the charity. Usually, this means running in that same triathlon that drew him to the charity in the first place. This year, he raised money in more of an unconventional way: He won first place in D.C.’s Dancing with the Stars competition.

The D.C. Dancing Stars Gala is an annual fundraising event where local celebrities train to dance with a professional. To receive any lessons in dancing, they must raise a certain amount of money. The winner is decided by a combination of how well they dance and how much money they raise for a charity of their choice.

“It’s great because no one is comfortable with their dancing,” Manatos said. “It’s a fun thing. You’re so desperate for it to go well.”

Through his victory, Manatos raised over $90,000 for the foundation.

He thinks one of the biggest challenges in fundraising is that community members are already familiar with Make-A-Wish, he said. Because of the name recognition, he finds that a lot of his friends assume that Make-A-Wish already has all the money it needs, but that couldn’t be farther from the truth, Manatos said.

“The only way we can grant wishes for local ‘wish kids’ is using funds that we raise locally,” Manatos said. “For every one child whose wish we grant, there are literally two more children for whom we can’t because we don’t have the resources.”

There’s another misconception about Make-A-Wish that Manatos is eager to clear up: Wishes from Make-A-Wish are not “dying wishes.” These wishes are for everyone ages two to 18 with life-threatening medical conditions. He believes that most of the wishes invigorate and make the affected child healthier.

“Physically, you can see the change we make; you can see the wish help them heal,” Manatos said. “That’s powerful stuff. You’re not only making the family happy, you’re helping their child survive.”

Manatos is proud of his work, he said. He hopes to continue inspiring others and create lasting memories for each affected family, and he loves seizing every opportunity he can to ensure the Make-A-Wish foundation helps every child and family that it can.

“It’s important to find something you’re passionate about,” Manatos said. “For me, that’s when I give back. It’s so amazing to become part of the memory of the child and the family forever.”