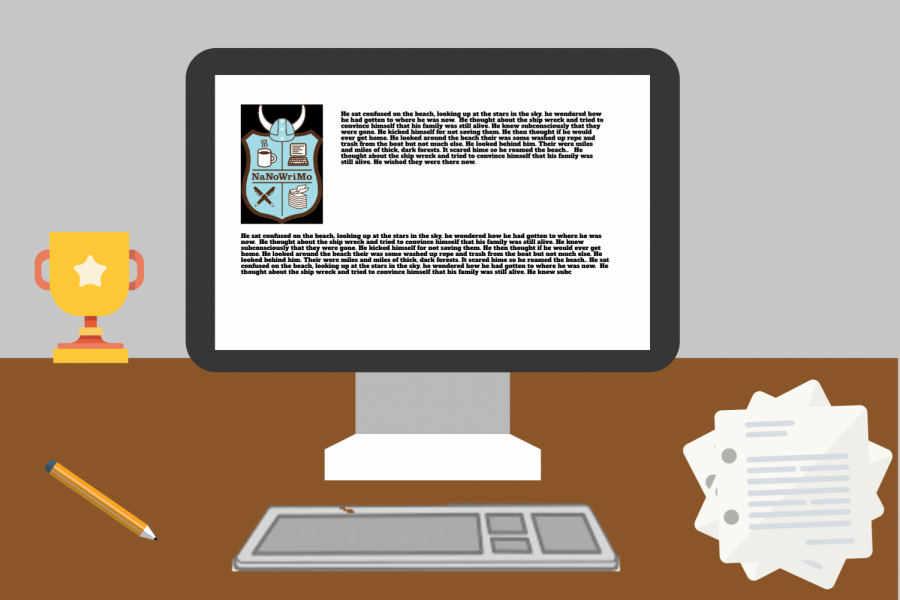 I spent the month of November trying to write a novel — and it wasn't easy.

On the first day of November, I wrote 800 words. Sounds like a lot, doesn’t it?
It wasn’t even half of my daily goal. Every night of November, I planned on writing 1,667 words a day. For someone who hadn’t tackled a creative writing project in what felt like forever, my goal seemed insane, but I really wanted to get back into creative writing, so I decided to participate in National Novel Writing Month.

The nonprofit organization National Novel Writing Month, or NaNoWriMo, challenges people of all ages to write a 50,000 word novel over the course of November. Some sponsors of the competition like Scrivener, a Microsoft Word-style application with an online corkboard and story outliner, provide their services at a 50% discount as a prize for winners and a 20% discount for participants. NaNoWriMo also works with IngramSpark, an independent self-publisher, to allow participants to upload their ebook for free. For me, though, the real reward was completing a novel.

When I sat down to write at the beginning of November, I had no idea what the plot of my novel would become or who my characters were going to be. I made everything up as I went along, infusing real-life feelings with fantastical characters that I visualized. I used various writing prompts when I got stuck, but generally, I didn’t know what was going to end up on the page before I typed it out. I ended up with a haunting fantasy story about an arrogant grave-digger, a psychic, a jeweler and a handful of nightmarish ghosts — but it didn’t stop there. I immersed myself in the world of my novel as much as I could: I wrote an old newspaper article about the villain’s backstory, I described the gravedigger’s fever dream as if I were him and I detailed not only a photo in the psychic’s wallet but who the phone number on the back of the photo calls.

But fully immersing myself into the world of my characters wasn’t going to be possible. When it’s 10:00 p.m, you’ve still got a little bit of homework left, you went to bed late yesterday and your brain is clean out of ideas, writing a 50,000-word novel is just as hard as it sounds.

This is where the NaNoWriMo organization steps in. Their website showed me a graph of where I should be each day if I stayed on pace. Organization leaders sent out pep talks from famous authors and organized online forums for NaNoWriMo participants to share notes. It was nice to see authors I look up to tell me a secret about writing and encourage me to keep working a little longer.

At the end of NaNoWriMo this year, I reached 25,035 words. It’s not enough for a novel, but the story I wrote has a beginning, a middle and an end. For me, that’s more important than the word count, especially because I’ll have to cut a lot of words during the editing process anyway.

NaNoWriMo is a lesson in imperfection. When writing, I couldn’t cut out anything, even if I thought it was terrible. The goal of NaNoWriMo isn’t to have the perfect story, it’s just to have a story. This idea was hard for me to come to terms with — for me, it’s far too easy to come up with an idea for a story in my mind, maybe even flesh out a few plot points and characters, and then not write beyond the first scene or page.

NaNoWriMo forced me to move past that, even if the scenes and pages I was writing weren’t nearly as good as I wanted them to be. Every time I wrote a sentence I disliked or if I was missing a piece of information, I didn’t dwell on it — I just made a note of it and moved on. Every day when I opened my Google Doc to write, I’d wrack my brain and scour the Internet for ideas. When inspiration finally struck, I’d then begin writing.

I also learned that writing for NaNoWriMo is both much easier and much harder than it sounds. All it took was carving out an hour or so every day for writing, no matter what else was going on in my life. When my life became busy or tiring, carving out that hour became infinitely more difficult than I could’ve imagined beforehand.

Even though I wasn’t expecting myself to win, I’m still a little disappointed. My story exists, but it doesn’t feel like enough. My characters don’t act on their own. Only one of them even has a name. I wrote the entire thing in lowercase and I used parentheses as often as periods. It’s essentially a train wreck in the form of 41 Calibri-size-11 pages.

But the most important thing I gained from the whole experience was that I’ve proved to myself that I can do it. I wrote 25,000 words of one story in a month, and I could do it again. That isn’t something I knew I was capable of before I started NaNoWriMo this year. NaNoWriMo is an insane challenge, but it was ultimately worth the time and work. Regardless of the quality of the end product, I created characters, settings and a story I’ll always remember.