The Black and White • December 3, 2019 • https://theblackandwhite.net/66485/opinion/in-defense-of-student-government-an-elected-perspective/

In defense of student government: an elected perspective 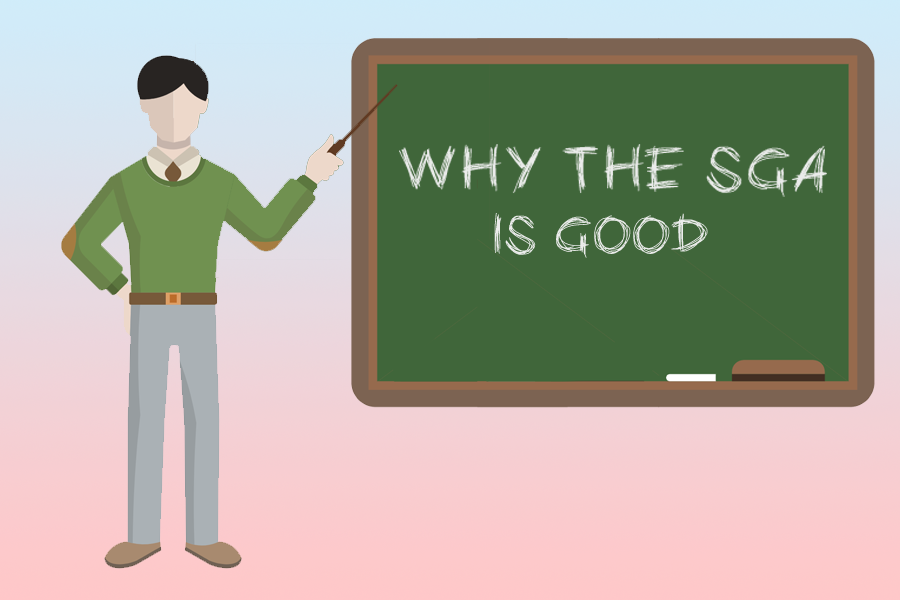 I used to bash the SGA as I've heard a lot of Whitman students do. It wasn't until I joined that I learned about everything we on the SGA can do to make our school a better place.

I may not wear a pin of a miniature American flag, but I still consider myself a politician. For two years, I’ve served as a member of the Whitman SGA, first as sophomore class officer and now as student body secretary. Both positions have taught me what a significant role the organization plays in making student events run smoothly, as well as bridging the divide between students and administrators.

Since I’ve been a part of the organization, the SGA has had issues with its own public perception, especially from students; much of the student body is skeptical of our abilities to make real change. In my experience, this is far from the truth. Every representative spends 45 minutes each day in the leadership class, collaborating to plan events ranging from the  homecoming dance to our annual yard sale. We hold meetings, delegate responsibilities and discuss ways to improve our school.

Our purpose is to provide students with a way to connect to their school and their school spirit. But the goal of student spirit isn’t just losing your voice at BOTC or jumping around at Vike-a-thon, it’s also building a community.

In fact, students tend to succeed more in a learning environment where parents, teachers and the broader community work together. In other words, community engagement positively correlates with how students perform academically.

During my first campaign for student government, I had no idea how to run for office. When I learned that the school would hold sophomore class officer elections in the spring of my freshman year, I was indifferent at first. I’d been at Whitman for an entire year already and hadn’t heard anything from my class representatives.

My naivety as a freshman only cemented my mindset, believing that Whitman student government would be the same as it had been in elementary and middle school — an institution that never established change. My experience led me to believe that the SGA was just an election cycle and a  popularity contest. But the truth was that candidates campaigned for votes to change aspects of the school. In some convoluted way, that’s why I campaigned: to initiate change in an organization.

I wound up placing third in the election, which earned me my position as a sophomore class officer. A few days after, I walked into the leadership class to comprehend how student government worked. Although I wasn’t enrolled in the class yet, I still wanted to understand the organization I had joined. I quietly sat in the back of the room, too shy to talk because I felt like I didn’t have the proper experience to meaningfully weigh in. As I listened to sophomores, juniors and seniors discuss themes for next year’s Battle of the Classes, something struck me: it wasn’t even May, and these students were already planning an event for next October. At that point, I understood that these elections could affect real change in our high school community.

As time passed, my skepticism of the SGA’s role continued to subside. The people in the class, from the newly-initiated sophomores to the veteran seniors, collaborated for months  in an effort to cultivate school spirit. I witnessed my peers work with business owners and charities to create school-sponsored events that amassed both involvement and enthusiasm from the student body.

Before I knew it, I was back where I started: gearing up for a new election cycle. Only this time, I had a comprehensive knowledge of the class’ importance. The stakes were slightly raised on my second time around, since I was running as a school-wide elected secretary. More than that, I was running to stay in a class that I had come to appreciate.

I wound up winning the election and, as a result, I’ve been  able to observe the relationship between administrators and SGA more closely. In my new position, I received a seat on the Executive Board — the school-wide elected SGA members—  which has helped me recognize the student government’s autonomy. Administration left very few guidelines on what we could or couldn’t do; instead, the adults were cognizant of the student perspective.

The people who run the SGA aren’t rank and file bureaucrats; they’re students with similar school experiences to under and upperclassmen alike. We plan events with the hopes of giving students a memorable high school experience. In crucial conversations between students and administrators, the SGA amplifies grades of hundreds into the voices of two dozen hard working kids, each of whom their either peers elected or has the confidence of those who were.