The Black and White • December 1, 2019 • https://theblackandwhite.net/66474/feature/coffee-house-moves-out-of-the-waud-but-student-spirit-keeps-it-alive/

Coffee house moves out of the WAUD, but student spirit keeps it alive 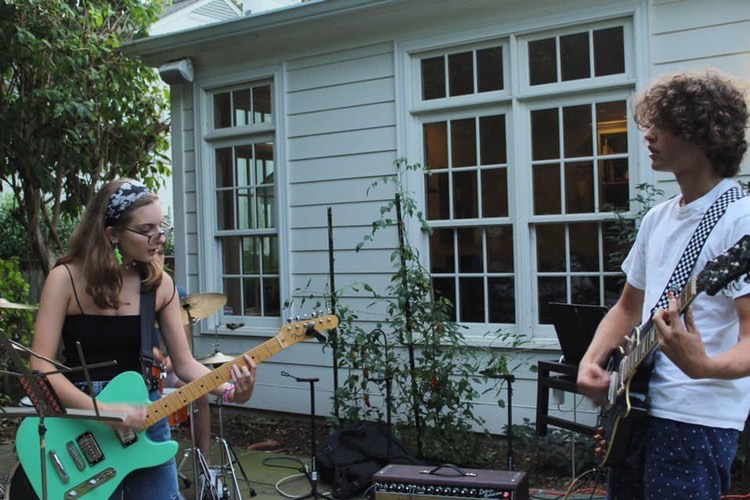 When junior Jane Pampillonia first stepped up onto the stage of the Whittier Woods’  auditorium to perform the song “Young Adult,” in October last year, she was nervous. It was her first time performing at Coffee House and the more experienced upperclassmen that primarily attended Coffee House intimidated her. Pampillonia, along with junior Eli Blanks and Gideon Helf, had rehearsed every day the week before the show during lunch. But after the performance, Pampillonia’s nerves and anxiety evaporated, and Coffee House’s supportive community showered her with praise.

“It’s one of my favorite memories from Coffee House,” Pampillonia said. “Everyone afterward was just like ‘that was so good.’”

For over 30 years, Whitman students have gathered monthly to play music, recite poetry, sing and more for an audience of their peers at Coffee House — a student-led open-mic. Until this year, students had held the event in the WAUD, but since construction began for the upcoming addition — which led to the closure of the Whittier Woods building — the club had to relocate.

No longer affiliated with Whitman, the current Coffee House leaders — Pampillonia, junior Joe Kaplan, senior Eva Ginns and senior Ella Kawamoto — have had trouble finding locations for performance. For the past few meetings, Pampillonia has hosted the event in her backyard.

Though finding places to host has been difficult, the performers enjoy the flexibility of venues other than the WAUD.

“It’s really kept my passion for music alive,” Kaplan said. “Having a little performance once a month to look forward to kept music fresh and exciting for me.”

The event provides an open setting that fuels artistic freedom and encourages experimentation and people are more comfortable playing whatever they want to play in a non-school environment, senior Aaron Winegrad said.

Winegrad, who’s been performing at Coffee House since his sophomore year, also said that it gives him a positive space to perform with his friends.

“Most of the vibe there is just really fantastic,” Winegrad said. “People just want a chill setting to lay down some funky beats.”

Former club sponsor Kelly Garton said that when the event was still held within the school, the number of audience members which now hover somewhere around 15 to 20, used to range anywhere from 30 to 100 or more.

Despite the downsizing that came with Coffee House’s departure from Whitman, at its core, much of what made Coffee House great in years past has remained intact, its members said.

“People just show up and do random stuff,” Pampillonia said. “They play whatever they want, and everyone’s always really supportive.”

Currently, many of Coffee House’s most dedicated performers have some sort of academic musical background, like piano or voice lessons. But Pampillonia said she wants to see the crowd expand to include students who don’t necessarily take lessons, but are just passionate about the art, regardless of skill level.

“As much as I love the people in the music program, it feels a little exclusive sometimes,” Pampillonia said. “There are people at this school who don’t have time for music classes and are very talented. I want people to talk about it more and spread the word, and get their friends to come, and their friends’ friends to come.”