The Black and White • November 30, 2019 • https://theblackandwhite.net/66467/feature/local-comic-book-store-fosters-more-of-a-family-than-anything-else/ 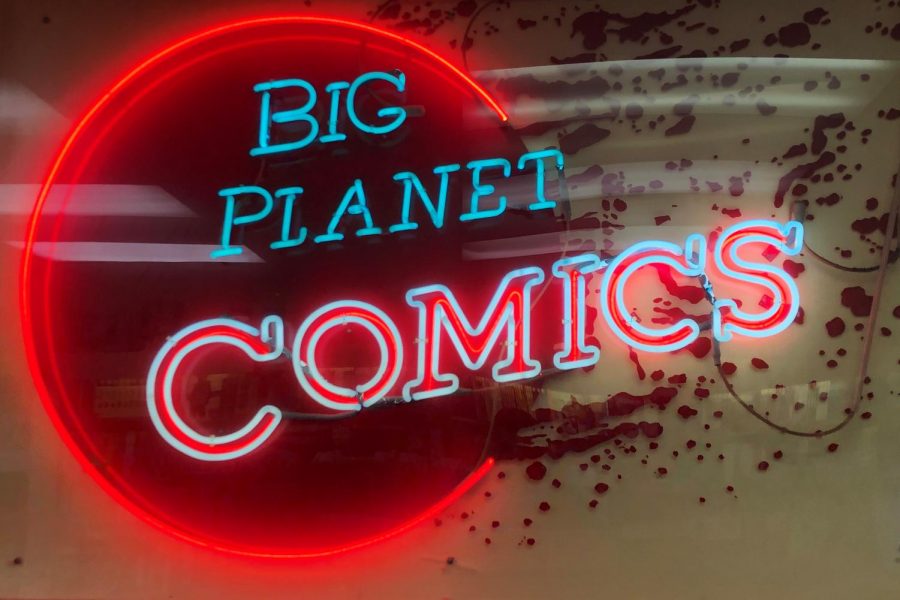 The Big Planet Comics sign shines bright in the Bethesda store. Big Planet is one of the most prominent comic book store chains in the DMV.

Walking into Big Planet Comics actively engages almost every sense. The sweet, musky scent of paper and ink hits first. Eyes take in the vibrant colors and never ending supply of comic books. The thin, waxy pages of each book slips through customers’ fingers as they listen to the quiet, but enthusiastic chatter from other readers. Unfortunately, there’s no way to satisfy taste — food is absolutely not allowed in the store.

Opened in 1986, Big Planet Comics is one of the oldest stores in Bethesda. Owner Joel Pollack created the store 33 years ago out of pure passion and love for comic books. 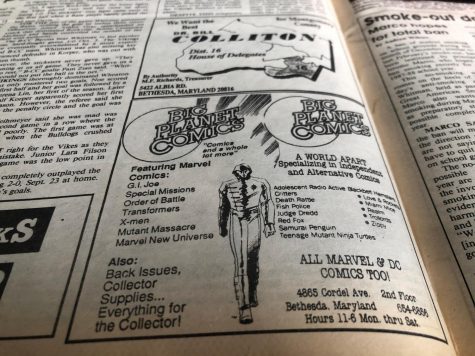 The graphic novel Big Planet, by science-fiction writer Jack Vance, inspired the name of the store. Pollack also wanted the first letter of the name to come early in the alphabet so the store could get a prime listing in the yellow pages.

Pollack shares ownership with Greg Bennett (‘87). Bennett was the third customer to ever buy a subscription box at Big Planet Comics. Soon after, he became one of Pollack’s first employees.

Bennett originally started working at Big Planet Comics in high school, but then left for Dickinson College. After graduating, Bennett returned to help Pollack open up a second store in 1992.

“Originally I thought, ‘I can open shop with him and help out for two years,’” Bennett said. “Then, I found a really interesting sense of community with all the guys who own shops.”

Though the shops are based in the DMV, Bennett’s community of comic book fans expands all the way to Europe.

“We did a lot of importing back then, and I still have a bunch of friends in France, Netherlands, Norway and Denmark,” Bennett said.

Pollack attributes the long-term success of Big Planet Comics to their wide variety of customers.

“Our crowd is a real cross section of the community,” Pollack said. “We’ve started to get a lot of younger kids.”

The store has regulars who come every Wednesday, when new issues arrive. These comic-enthusiasts excitedly chat with each other and debate over which comic books to purchase. Debatable points range from things as simple as art and illustrations to more complex storylines — like how Batman is a normal man trying to be a god, while the rest of the D.C. Comics roster are gods trying to be humans.

Through a common love for comics and the store, many Big Planet customers share a special connection.

Morgan Epstein started shopping at Big Planet while attending American University; he began working there in the early 2010s. Comics have always been a huge part of his life, and he connected with Big Planet more than any other comic book store, he said.

“It’s everything I could want in a store,” Epstein said. “The staff is more of a family than anything else, and you’re always a part of that family”

Even though Epstein left his job as a clerk at Big Planet a few years ago, he still visits the Bethesda store on his days off — he now works as a consultant for the company. He also has brunch with a group of Big Planet customers and employees almost every weekend.

Comic book fans in the DMV have a strong commitment to remembering the history behind their community. One dedicated Big Planet customer even published the book Tales from the DMV, which contains an in-depth history of comic book culture in D.C., Maryland and Virginia. The book’s cover features a photograph of Pollack.

Big Planet Comics may be a small shop in Old Bethesda, but to its customers and employees, it’s a place for community — and, of course, comics.

“When I was younger, I would’ve said my favorite part was something fanboy-ish, like getting to meet my idols and hang out with them,” Bennett said. “Now, I’d say it’s the really, really great community of people and everybody who’s into it because they love it.”