The Black and White • November 29, 2019 • https://theblackandwhite.net/66459/feature/arena-stages-newsies-inspires-us-to-seize-the-day/

Arena Stage’s “Newsies” inspires us to “seize the day” 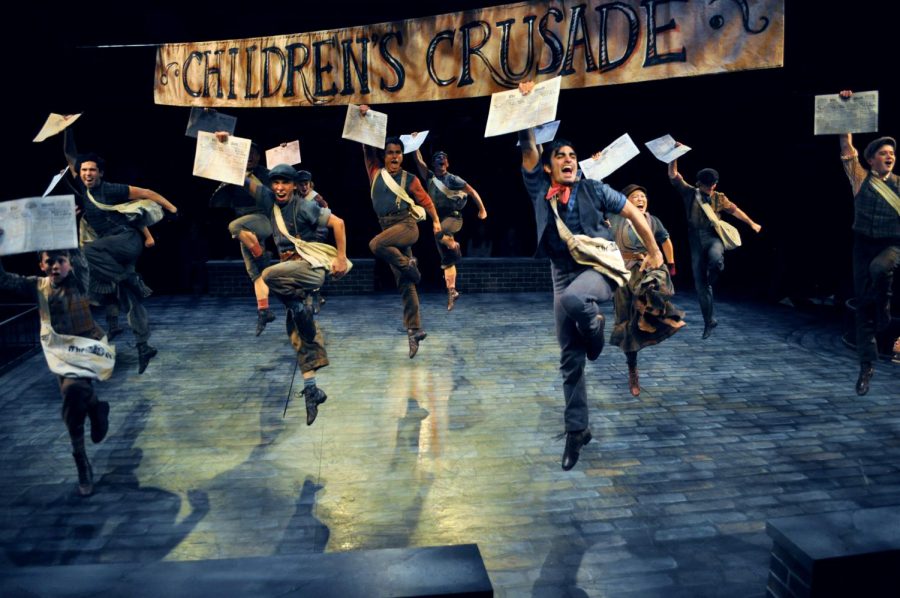 The cast of Disney’s Newsies is running Nov. 1 through Dec. 29 at Arena Stage at the Mead Center for American Theater.

Extra, extra, read all about it! Today’s headline: Newsies is an engaging and entertaining delight of a musical. Arena Stage’s production takes this beloved Disney classic and transforms it into a feast for the eyes and ears.

Though over 60 cities have hosted the National Tour productions of Newsies, director Molly Smith’s production is a manifestation of her own creativity and cleverness — and it’s truly an original. Smith’s inventive direction takes advantage of Arena Stage’s Fichandler Stage in D.C., an “in-the-round” theatre with seats surrounding every direction of a rectangular stage. The action, the excitement and the drama play toward all 360 degrees of the theatre.

“It was my first time working in the round, and I was so nervous,” said actress Tro Shaw, who plays Tommy Boy, one of the newsies. “But it’s incredibly empowering. It’s so great that I can turn to any direction and tell people my story.”

The actors constantly switch places, moving their actions and emotions to all corners of the stage to ensure that no audience members feel left out. Though it’s impossible for all of the audience members to see the leads’ faces all the time, it doesn’t feel like anyone’s being cheated out of the vivacious action. Smith’s dynamic staging embraces the multi-directionality of the theatre; actors dance in circles, walk around while giving speeches, or stand in a corner of the stage during important moments of the play.

In the musical itself, the cast tackles every complex and challenging song flawlessly, thanks to steady music direction from Laura Bergquist. The music’s breathtaking harmonies and soaring melodies fill the room. Erin Weaver, who plays journalist Katherine, captures the audience when she belts her fast-paced solo number “Watch What Happens.” Every member of the ensemble sings their hearts out for showstopper “Seize the Day,” which inspired almost a whole minute of thunderous applause.

Parker Esse’s jaw-dropping choreography brings the story of the striking newsboys to life. Complicated dances, consisting of leaps, tumbles and cartwheels, accompany nearly every song and breathed spirit and pizzazz into the show. The frequent and jaw-dropping dance breaks are so incredible that they become physically tolling for the actors. It’s easy to wonder how the cast — some of them just teenagers — maintain their stamina and energy through the entire show.

“We just take it one dance number at a time,” Shaw said. “If you think ahead too much, you start getting overwhelmed. We have to stay in the moment, and that fuels us.”

The energy that fuels the actors also fuels the audience. The show is over two hours, but it never feels like a slog. Newsies is a lively celebration of children who put their differences aside to fight for a better future. The newsboys’ strike doubles as a subtle reminder of recent events where students, bursting with passion, protested for change and achieved incredible successes.

Toward the end of the show, an actor who bears a striking resemblance to New York City Governor (and, later, 26th U.S. president) Teddy Roosevelt stands to give an inspirational speech to the newsboys who just fought for their livelihoods. But he isn’t really speaking to the newsies; instead, he directs his monologue towards the audience. He promises the youth that their future will be prosperous while telling the older generation that it’s time to step aside. The show is a powerful reassurance that anyone, regardless of their background, can create change, just like the plucky newsboys.

Newsies is an ambitious, brilliant and beautiful production that will have you walking away ready to face the troubles of the world smiling — and maybe dancing too.

Tickets for Disney’s Newsies are $51 to $105, subject to change based on availability, plus applicable fees. Purchase tickets online at arenastage.org or by phone at 202-488-3300. Tickets available until December 29, 2019.