The Black and White • November 29, 2019 • https://theblackandwhite.net/66424/feature/women-on-call-local-artist-transforms-call-boxes-creates-tribute-to-historic-women/ 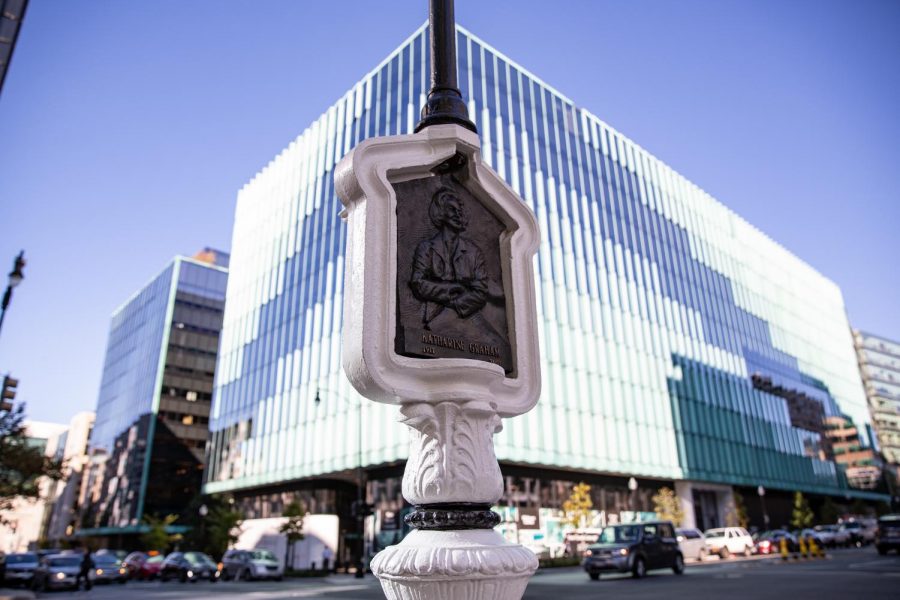 A callbox in D.C. honors Katharine Graham, who oversaw the Washington Post during the Watergate scandal. Local artist Charles Bergen is converting callboxes into monuments for influential D.C. women.

Stepping off the escalator at Metro Center, a tall, bright red sculpture is one of the first things that pedestrians see. These structures, called call boxes, are scattered throughout D.C. and have existed since before the invention of the telephone. During the mid-1800s, police and fire departments used the tall, gray house-shaped boxes to locate emergencies and communicate within their department. After decades of neglect, these historic boxes have found a new purpose: public artwork commemorating DC’s famous women.

Local artist Charles Bergen began working on eight of these boxes in 2017, restoring and transforming them into monuments for historic women who significantly impacted the city. The women honored in this project range from Elizabeth Keckley, a close confidant of the Lincolns, to Katharine Graham, the Washington Post’s Editor-in-Chief during Nixon’s Watergate scandal.

“Call boxes are so cool because they’re historical elements that are already there,” Bergen said. “They’re such a great place to put historical art.”

The call boxes still stand in their original locations spread throughout a small area to the east of the White House. The locations have a connection to the women they memorialize. A sculpture commemorating Mary Church Terrell, one of the founders of the NAACP, is located next to the restaurant that she successfully sued, which forced all D.C. restaurants to integrate. The intentional locations of each callbox make the relationship between the women and the monuments more physical, Bergen said. 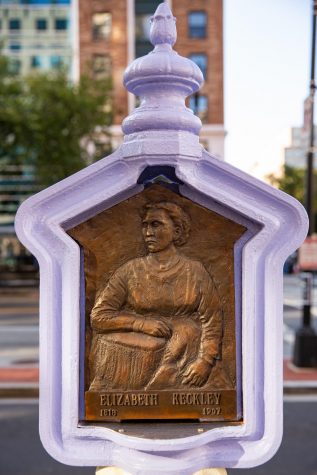 Bergen meticulously designed each aspect of the boxes. On the box’s hexagonal base, Bergen listed the woman’s biggest accomplishments — with one feat written on each of the six sides. There’s a bronze statue of each woman inside the boxes, and a statue representing an aspect of their work on top of the box. The boxes also have a small painting on the back depicting the women’s work.

“I think sometimes we just wanted to cram every idea we had into a small, small box,” Bergen said. “I had to simplify a little bit to get to the finished project.”

This isn’t the first project seeking to make new use of the call boxes. From 2000 to 2009, the D.C. tourism office ran a program called “Art on Call,” where tourism office members sponsored the renovation of more than 140 call boxes, adding new public art to the city. Bergen has also worked with call boxes before. He refurbished six boxes on Rhode Island Avenue in 2017, to fit the personality of the neighborhood, adding tributes to iconic residents, stores, and a beloved trolley system.

Mara Cherkasky, a local historian who founded Prologue D.C. — a non-profit dedicated documenting D.C.’s history — came up with the idea for Bergen’s current project. Cherkasky also worked with Bergen in choosing which women to include. In 2014, D.C. only had four public statues of historic women. Out of those four, only two were Americans and only one — teacher and civil rights advocate Mary Mcleod Bethune — was a woman of color. The other two, Joan of Arc and St. Bernadette, were both Europeans who lived centuries ago. The women featured in the new call boxes are all Americans, and five of them are women of color.

“There are hundreds of statues of white men on horses,” Cherkasky said. “It’s kind of telling that the only few women had died a millennium ago.”

Bergen and Cherkasky drew inspiration for this project from the upcoming centennial of the 19th Amendment. One of the women they honor is Alice Paul, who worked in DC as one of the main leaders of the women’s suffrage movement in the early 1900s. Her call box is painted purple, white and green for the colors of the suffragettes. It’s located on the parade route from President Wilson’s inauguration, representing one of the most famous protests that Paul led. A steel sculpture of the protest, modeled directly from a photo from the event, rests on top of the box.

“I love history, and my mother was a history teacher,” Bergen said. “Doing this project for the anniversary of the 19th amendment just made sense.”

Making these call boxes has allowed Bergen to appreciate what each of the women has done for both D.C. and America as a whole, he said.

“These women were part of an important chapter in DC history,” Bergen said. “I’m glad that we are finally able to do something for them.”