The Black and White • November 25, 2019 • https://theblackandwhite.net/66391/feature/bird-boy-cameron-darnell-amasses-instagram-following-from-bird-photography/ 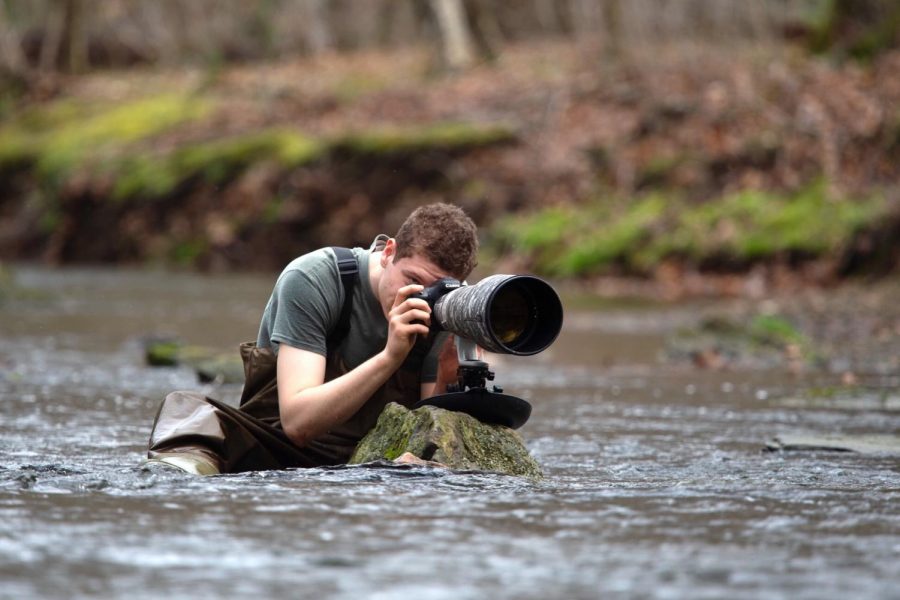 Senior Cameron Darnell has a passion for bird photography.

The flies were swarming, biting and buzzing, and the sun was beating down as midday struck. The swath of marsh that Cameron Darnell had called his home for the past two days smelled putrid. I have to get this picture, he told himself. Cameron waited patiently for any sign of life. Yet all he got in return was silence, except for the violent humming of insects. The sun began to set, giving the marsh a more relaxed hue. Just as his optimism began to draw low, all of a sudden, there it was, its simple, spotted frame complete with a sleek, black, hooked beak. Cameron positioned himself to get a shot of the majestic bird with the radiant marsh in the background. The perfect picture.

This past summer, Cameron took a trip to Cape Cod, where he captured pictures of the whimbrel, a shore bird that typically resides on the west coast. On the east coast, it’s rare to find this type of bird during its period of migration. Nevertheless, he was able to get numerous pictures over three days because he had seen whimbrels there in past visits and researched sightings.

Cameron photographs mostly birds but has also captured scenery and, while in Alaska, even whales. In June 2018, he began an Instagram account fully devoted to wildlife photography, “camerondarnellphoto.” Cameron has also won several awards, including first place in the 2017 Massachusetts Audubon Photo Contest and the 2017 American Birding Association Young Birder of the Year award in photography.

Cameron started as a bird watcher, but as he grew a love for photography, the two interests merged. His love of birds started because “they can fly,” he said, but later he began to appreciate their diversity. He started taking pictures at age 10, when he saw someone photographing a deer, he said. After that, he got an entry-level camera and took off from there.

“There are 10,000 species of birds in the world,” he said. “A lot of them are really beautiful, so they’re really aesthetically pleasing to photograph.”

Cameron’s father, Robert Darnell, said that though he doesn’t specifically share Cameron’s love of birds, Cameron grew up in a nature-loving household. Robert and Christine Greenlees, Cameron’s mother, have done a great deal of driving, waking up early and travelling to nurture his passion for photography, Robert said.

“My sense is that he just got to work and really wanted to preserve and share these birds,” Robert said.

Cameron wants to promote conservation and environmentalism through his photography, so on his Instagram page — which has over 1,540 followers — he writes captions highlighting that some of the species he photographs are disappearing rapidly. Conservation photography is about taking detailed photographs of endangered species that convince people to join the battle against that species’ peril, Cameron said.

“I definitely feel like I’ve changed some minds over my time photographing birds and maybe helped people see the beauty of birds and realize that they really are under threat right now,” he said.

Cameron’s dedication to each photograph helps him capture difficult pictures that other photographers fail to get, he said. He sometimes puts himself in unpleasant conditions, like getting up early, taking pictures in harsh climates or camping out on pungent grounds, in order to get good shots.

“If it’s June, near the solstice, I’ll be getting up at around four, because I like to get to the location before sunrise,” he said. “The frame of light where it’s a half hour before sunrise to an hour after sunrise is when you get your best pictures.”

About two years ago, Cameron traveled to coastal Delaware to take pictures of the snowy owl while it was migrating from the Arctic. Immediately after stepping outside, gear in hand, Cameron realized he had made a grave mistake; he had forgotten to pack gloves. After a close-up photography session, it took hours of being in sweltering heat for his hands to recover, he recalled. This was his most memorable, unpleasant experience while shooting, but he doesn’t regret it at all, he said.

The podcast’s co-creator Ray Hennessy first met Cameron a year and a half ago, after Cameron, an admirer, reached out to him via social media. Later, Cameron visited one of Hennessy’s photography workshops in New Jersey.

Hennessy was so impressed by Cameron’s skill that he invited him to join him as a guest on the “Wildlife Photo Cast” pilot episode.

About a year and a half ago, Cameron, along with the rest of the participants in Hennessy’s workshop on shore bird photography, went to a jetty in hopes of getting the perfect shot of the American oystercatcher, a small brown and white shore bird. After a couple of hours and no sightings, Cameron separated himself from the group, noticing one in the distance, relatively close to a family photoshoot. At one point, Cameron began crawling on all fours to get the ideal angle, not caring about the sand collecting on his clothes. But while Cameron continued adjusting his angles, the group struggled to stifle their laughter, realizing Cameron had encroached on a family’s photoshoot.

Though funny, the tale also encompasses Cameron’s enthusiasm, fearlessness and willingness to do anything getting the shots he wants, Hennessy said.

“He has no problem pushing himself to really try and get the shot,” Hennessy said.

Since he began bird photography, Cameron has improved a lot, he said. He called his first photos “terrible,” but after 10 years of experience he can name the calls of almost every North American bird species. He attributes a lot of his growth to Adobe Photoshop, which he uses to process his photos, his motivation to capture species who live outside of the area and his self-teaching through YouTube videos. He plans on continuing photography as a hobby instead of a profession after high school, he said.

“Photography has definitely made me see more beauty in the world and kind of look at things through a more visual lens, just paying attention to the subtle changes in light that occur throughout the day, how beautiful the sunset is and small things in nature and in life that I didn’t notice before I started doing photography,” Cameron said. “In short, I have become more perceptive of stuff around me.”