The Black and White • November 25, 2019 • https://theblackandwhite.net/66386/opinion/dont-be-afraid-to-serve-politics-at-thanksgiving/

Don’t be afraid to serve politics at Thanksgiving 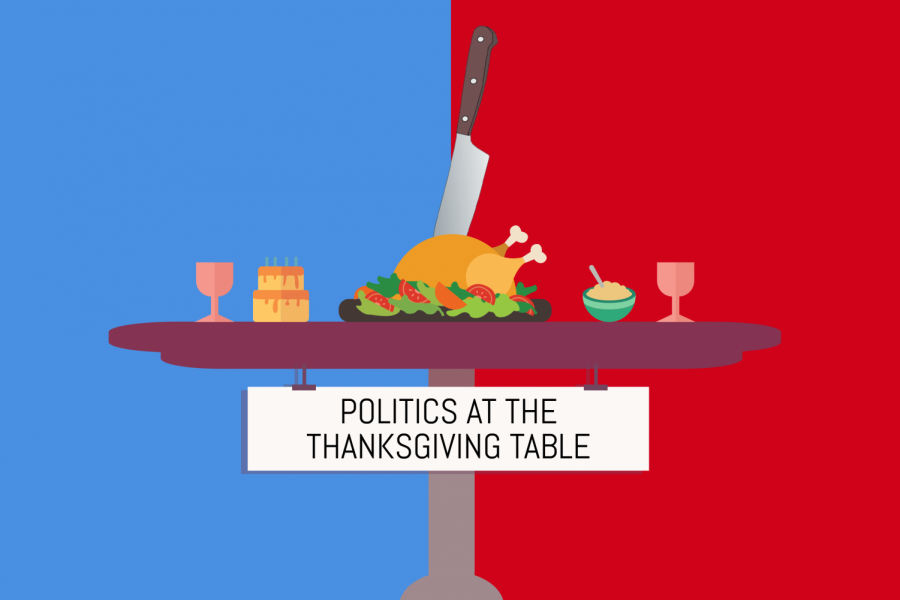 At the dinner table, discussions of politics are frequently taboo. But respectful conversations about differing perspectives can help us learn and grow.

My home life revolves around the news: my family’s radio is always on, we still receive print newspapers daily and our dinners are stuffed to the brim with discussions about current issues. So when Thanksgiving rolls around, I find it strange that current events — which often include a hearty helping of politics — are not served alongside the turkey.

Like most Americans, I have a relative whose political views differ from those of the rest of my family. As a result, we don’t talk about health care, climate change, immigration, foreign relations, elections or anything else considered controversial at Thanksgiving.

For some people, avoiding politics might be a relief; for me, it’s a nightmare.

Politics surrounds my life  — partially due to the fact that Congress is only 8 miles away from my house.

I’ve marched with my peers on Capitol Hill at the March for Our Lives protest. I’ve huddled under my desk in weather emergency drills after reading articles about the impact of natural disasters like hurricane Dorian and the California wildfires, as well as the government’s response to aid the people in the regions affected. I’ve noticed that online platforms — like Facebook and Google — invade my privacy by using my searches to send me personalized ads, and I’ve read about Mark Zuckerberg’s testimony in Congress. How am I supposed to remain silent about all of that? We can’t just ignore what’s going on in the world to avoid backlash from the people we care about.

Refusing to acknowledge politics at the dinner table only divides us further in the long run. Discussing our opinions with our family shouldn’t be taboo. If we can’t even speak civilly about the political rifts in our nation with those closest to us, it’s difficult to productively discuss politics with anyone else.

Of course, senseless and excessive arguing doesn’t help anybody, but provided that we’re honest, respectful and thoughtful, discussing politics can help us learn, grow and form our own opinions.

Yes, one conversation at dinner might not change your cousin’s mind about current immigration policies, but changing minds isn’t the point of open discussion. Within families, open conversation and understanding one another’s viewpoints could ease political tension and save family members from having to awkwardly divert the conversation away from anything even slightly political.

Lack of exposure to others’ political beliefs isn’t limited to face-to-face interactions. Social media platforms and search engines use filter bubbles — algorithms that determine what we’ll see on our screens based on our browser history — which often offer news that reflects our already-existing beliefs, so we aren’t exposed to opposing perspectives.

Only discussing politics with those who agree with us isn’t enough; we need to reach out and truly listen to what the opposition has to say, rather than isolating ourselves from those with opposing ideologies.

So, if politics come up in the middle of Thanksgiving dinner, don’t be quick to change the subject. In addition to trying your grandma’s stuffing this Thanksgiving, open up your palate to a different political opinion.