The Black and White • November 22, 2019 • https://theblackandwhite.net/66350/feature/students-explore-share-passions-and-interests-through-whit-x-lectures/ 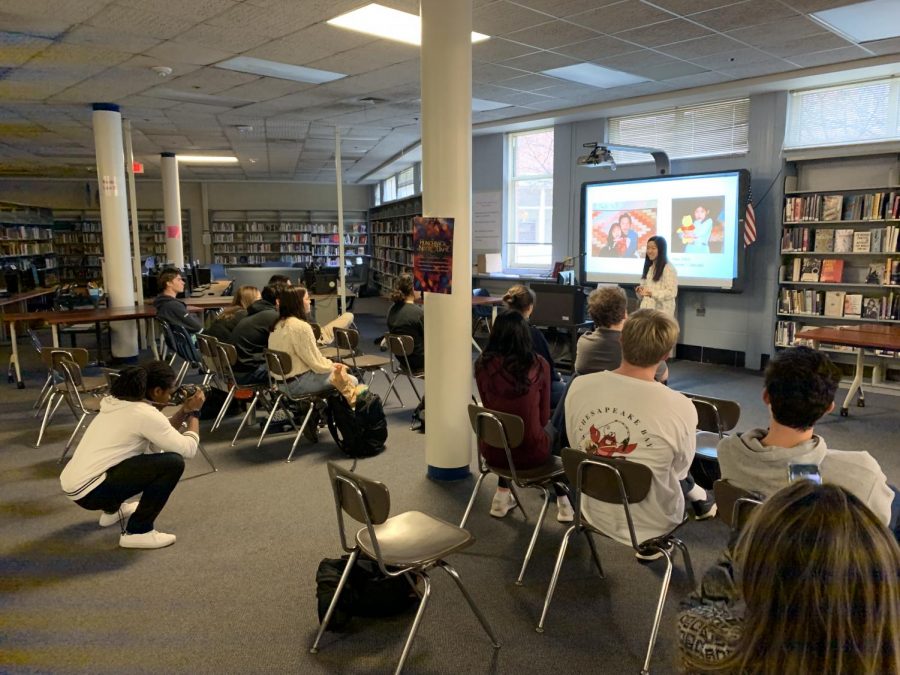 Junior Heather Wang gives her lecture on the 1.5 generation during fifth period Nov. 22.

During fifth and sixth periods, the library transforms from a bustling hub to a quiet, reflective space for students to present on any and all topics — from philosopher Jean Baudrillard’s remarks on capitalism to how the Flat Earth Society perceives the world.

Throughout November and December, six students will lecture on a series of various topics outside the classroom as part of the Whit-X series in the media center every other Friday.

English teacher Omari James created the series last year after Ethan Kim (‘19) wanted to demonstrate how hip-hop music reflects on people’s responses to death, James said. Kim decided to present this issue in the media center, and it attracted a large crowd of students.

“There were 70 to 80 students that came out purely from interest,” James said.

James wasn’t only surprised at the attention Kim’s presentation received, but also at how students came out of curiosity and not for grades, he said.

“It was so awesome to see kids come out and be a part of something intellectual, and I wanted to keep that going,” James said. “I decided to make Whit-X so kids can build a passion project and share it with the school community.”

To sign up, students complete an application that explains the topic they’re interested in and why they want to present about it. James then previews each lecture individually and either approves or rejects the ideas. Once selected, students have up to two months to research their topic. Before the final product, James helps polish their presentation to perfection.

Junior Ben Waldman presented on the beliefs of political philosophers Karl Marx and Jean Baudrillard Nov. 1. In his presentation, Waldman detailed Baudrillard’s emphasis on capitalism, and how certain attractions, such as amusement parks, have a symbolic value that reflects public opinion and exceed their materialistic values.

“When you pay $100 dollars for Disney World, Marx thought that you’re just paying for the ride and the experience,” Waldman said. “But, you’re also partially paying for its symbolic value because Disney has this unique value in the American middle class. It’s integrated into our society because people think it’s much more than what it is.”

Waldman — despite registering at the last minute, giving him only two weeks rather than two months to prepare his lecture — amazed students by highlighting how frequently society has these biased beliefs.

Freshman Luca Ivanovic had low expectations when he first heard of the topic because he thought the lecture wouldn’t be appealing, he said. However, after Waldman presented, Ivanovic changed his mind.

“It turned out to be really interesting,” Ivanovic said. “He put a lot of details into the presentation. I was blown away by the fact that we have some of these beliefs in our society such as capitalism that we don’t really have much say into.”

Senior Sarah Henderson covered how the media plays a role in “queercoding” — a term describing how animated characters express stereotypically queer characteristics without implying that they’re part of the LGBTQ community Nov. 15. Henderson analyzed how villainous characters, including Scar from The Lion King and Captain Hook from Peter Pan, display these behaviors and influence their audience to believe queer behavior is immoral, she said.

“They’ll see these animated villains that have these certain characteristics or sentiments and correlate those behaviors with villians,” Henderson said. “We have to recognize these stereotypes and not let our perceptions be based off of just a character.”

Junior Heather Wang’s lecture Nov. 22 detailed the 1.5 generation — a generation of immigrant teenagers from all over the world that come to the United States without any prior knowledge of the country, she said. Wang tied the issue to the underrepresentation of minorities at Whitman.

“Whitman is not that diverse and accepting compared to other places,” Wang said. “I want to be able to use my voice to represent those who cannot speak for themselves.”

The presentations will continue into mid-December. James hopes that Whit-X will spur students to become more invested in meaningful learning rather than academic achievement, he said.

“We have so much capability at this school and I would love to see that used just for scholarship,” James said. “There’s so much to be passionate about in life.”

There will be more lectures in December. Senior Annie Caroline’s “Rate Your Pain” will be on Dec. 6, junior Charlie Imperial’s “Identity: An Incomplete Puzzle” will be on Dec. 13 and freshman Jack Szyprowski’s “Flat Earthers Around the Globe” will be on Dec. 19. They will be in the media center during fifth and sixth lunch. Ben Waldman and Heather Wang are Metro Writers for The Black & White.