The Black and White • November 21, 2019 • https://theblackandwhite.net/66318/news/smob-nate-tinbite-holds-first-town-hall-at-seneca-valley-high-school/ 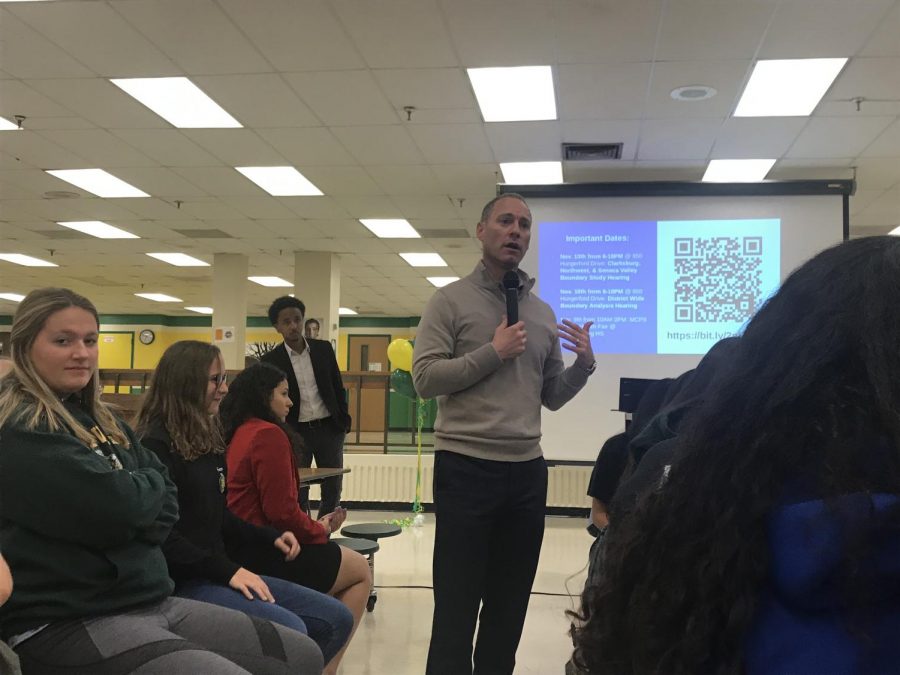 The town hall included an update from Tinbite, a Q&A with MCPS Chief Operating Officer Andrew Zuckerman and a feedback session where students could express their opinions by writing them down on poster paper.

One of the most prominent discussion topics was the Seneca Valley boundary plan. The plan includes construction of a new and larger site for Seneca Valley to relieve overcrowding at Clarksburg, Seneca Valley and Northwest High Schools. After the plan is initiated, the new Seneca Valley High School would expand its student capacity to approximately 3000.

During the first half of the meeting, Zuckerman introduced the superintendent’s recommendation, Option 11a, which predicts the racial diversity of enrolled students, and the percentage of students in need of free and reduced meal programs. The plan aims to balance diversity in the student body and reduce overcrowding in the cluster.

Tinbite offered the details of Option 11a, and then town hall coordinators handed students in the audience index cards for them to write down their opinions on the proposal. Coordinators then collected the student responses and Tinbite promised to bring their voices to the Board of Education.

Although the new boundaries currently don’t affect Whitman, it might in the future, Zuckerman said.

“Whitman is a good example of a school that continues to grow and is an area where we continue to add capacity,” Zuckerman said at the town hall. “The district-wide boundary analysis could provide insight to the Board of Education that someday in the future could have an impact on communities all across the county.”

At the end of the town hall, Tinbite handed out poster papers and asked students to work with their tablemates to outline the changes that they believed MCPS most needed. Many students wrote about how they wanted better mental health awareness, school infrastructure, more programs for autistic students and lower teacher to student ratios at their schools.

Tinbite said his first town hall was informative and that he’ll visit Whitman’s side of the county in the following months to further discuss these issues.

“An important part of my role is to make sure students understand what’s happening because I often recognize that I’m the only student who’s hearing these in full detail at the board table,” Tinbite said. “I was trying my best to break down what is generally going to happen over the next few weeks and see what questions I can ask on the students’ behalf.”