The Black and White • November 20, 2019 • https://theblackandwhite.net/66290/alsoinprint/alex-chappell-06-watches-from-the-sidelines-and-enjoys-it/

Alex Chappell (’06) watches from the sidelines — and enjoys it 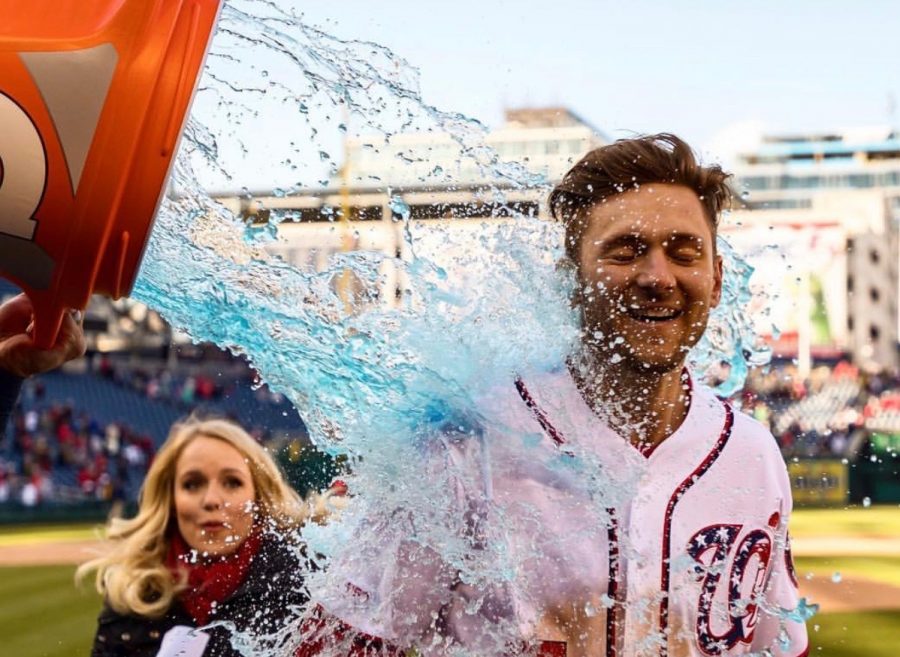 Alex Chappell watches as Nationals' shortstop Trea Turner gets soaked after hitting a walkoff homerun in the Nats' first win of the season.

Alex Chappell (‘06) was the voice of the morning announcements Monday through Thursday and host of Friday’s televised news at Whitman during her junior and senior year. Thirteen years later, Chappell has moved from broadcasting Whitman news to reporting on some of the biggest stars in baseball, like the Washtington Nationals’ left fielder Juan Soto, third baseman Anthony Rendon and pitcher Max Scherzer.

When Chappell graduated, the football field had real grass, there were no portables, Dr. Alan Goodwin was principal and Chappell was still unsure of what she wanted to do for a living.

She stumbled upon sports journalism by complete coincidence while studying at the University of Alabama.

“I signed up for the radio station my first week on campus, and they had an opening to cover the football team,” Chappell said. “I found my passion and followed the path of sports broadcasting.”

Chappell is in her first year at the Mid-Atlantic Sports Network (MASN), where she covers the Nationals as a sideline reporter. Chappell previously worked as a freelance sideline reporter for ESPN, a sports reporter for a CBS affiliate in Birmingham, Alabama, and a reporter for WHDH, a local network covering the four major sports teams in Boston.

In 2017, Chappell was assigned to be a pregame and postgame reporter for a year with the Tampa Bay Rays, a Major League Baseball team. She said the experience taught her the tricks and basics of covering a MLB team.

Chappell wanted to eventually work in D.C. to fulfill her dream of being a reporter for her hometown team. Through a colleague, she heard that Dan Kolko, the former Nationals sideline reporter at MASN, was going to be promoted. She immediately compiled a resume tape that included a few of her past interviews and reached out to the network. When MASN offered her the position, she was beyond thrilled, she said.

“It was about finding the right position and the right fit,” Chappell said. “I wanted to be here back in my hometown. It was all about timing, luck and how I positioned myself. It all came together.”

Chappell’s first season with the Nationals came the year after right fielder Bryce Harper left the team, so she saw the Nats struggling with the loss of their star player in the beginning of the season firsthand from the dugout.

“There are definitely challenges with covering a team that isn’t performing how people had expected,” Chappell said. “You want to find the positive stories, and there is definitely a challenge in that. It’s about remembering you have a job to do and taking the emotional side out of it. And whether you’re winning or losing, there is going to be a bright star of the game.”

Chappell had a front-row seat to see the Nats’ comeback this season, and although many doubted them, the Nationals stuck to their season motto and “Stayed in the Fight.” True to form, they finished their season strong and are now heading to the World Series for the first time in franchise history.

“Everyone had counted them out, and getting to cover a team that completely turned the season around and shocked the sports world was really exciting to be part of,” Chappell said.

Chappell starts each day by listening to her interviews with the players and coaches from the day before the game and preparing questions and the angle of the story for the upcoming game broadcast.

She arrives at the Nationals Clubhouse, which houses the locker room and coaches’ offices, at 3 p.m., and by 3:20 p.m., she starts interviewing players. From 4:20 p.m. to 6:30 p.m., she and other members of the media have a press conference with Nationals manager Davey Martinez before Chappell finalizes her story for the pre-game show on MASN. By first pitch at 7:05 p.m., she gives her producer her story then sits in the National’s dugout with the cameras ready.

Covering the Nationals, Chappell has faced criticism and discrimination as a woman in the sports industry, she said.

Most of the hate comes from other women commenting on how she dresses or how she lacks baseball knowledge, she said. In these instances, she tries to focus on the positive, a lesson she learned from her mom.

“There’s no way you can avoid it; we [female sports reporters] are just in a position where we’re going to get it,” Chappell said. “You have to look at it as a 90-10 rule. If 90% is pretty positive, then the other 10% just has their own agenda. But if someone is questioning your knowledge of the game or not liking the report, then that is how you can try and change their mind.”

Dealing with this discrimination, Chappell also draws on lessons she learned years ago at Whitman. She remembers making close friends, learning from good teachers and performing every Friday in front of the whole school with the Poms team. But most importantly, she recalls the atmosphere of kindness and carries that attitude with her.

“Be kind to people, that was one thing at Whitman,” Chappell said. “I just tried to talk to everyone and have a lot of different friends. High school is hard enough — just be nice.”

Now, Chappell is covering the Nats’ postseason for TBS. Chappell covered the Nationals vs. Dodgers series, which led to an on-field interview with second baseman Howie Kendrick after. His heroic grand slam won the game and led the Nats to the National League Central Series for the first time since the franchise moved to D.C. After the victory, dances erupted in the Nats’ dugout.

“For me to come home, work at a great network with amazing people and cover my hometown team: this is my dream job,” Chappell said.