The Black and White • November 18, 2019 • https://theblackandwhite.net/66201/opinion/the-american-identity-crisis/

Reconciling my Chinese-German ethnicity with my American nationality 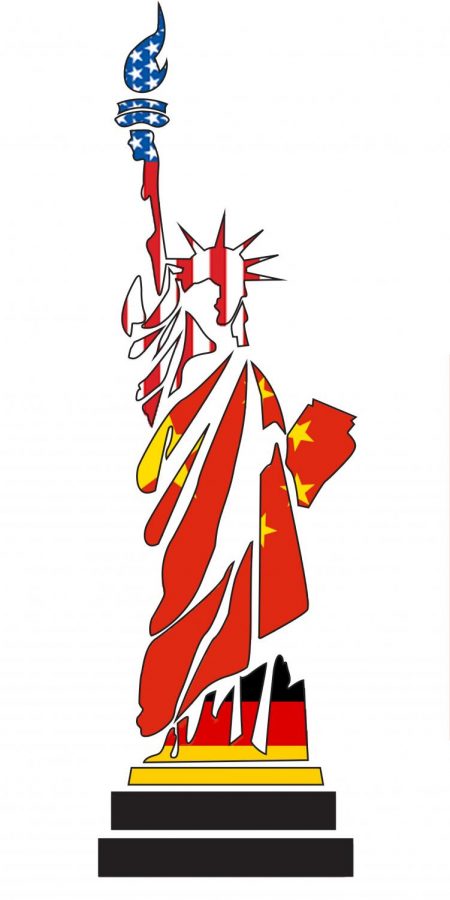 I’ve never shopped at a Walmart. I’ve never been to an amusement park or ridden a roller coaster. I had my first milkshake and snow cone last summer. I’ve only watched one Super Bowl, and the first football game I went to was the homecoming game my freshman year.

Instead, my family shops at H Mart and Rotmunds for hard-to-find Asian and European delicacies. I spend my summers in Hangzhou and Berlin rather than Florida or New York. And instead of American football, my family watches Fußball, which most Americans know as soccer. To me, these activities have always been the norm, and, growing up, they didn’t make me feel any less American.

I come from a family of immigrants. My parents both immigrated to the United States in the 1980s, my mother from post-cultural revolution China and my father from West Germany. Even my older sister was born in the United Kingdom, making me the only natural-born American citizen in my family — something that I am quite proud of.

But in the past few years, following Trump’s election in 2016, the division between ethnic groups has widened, and it has become increasingly difficult for me to reconcile my American and non-American cultural upbringing.

The general attitude toward immigrants in the United States has always been somewhat controversial, even under more progressive presidents like Obama. Historically, nationalists have loved using immigrants as scapegoats. They have blamed them for a variety of issues ranging from crime to economic difficulties despite the fact that there is no correlation between immigration rates and crime rates and that both documented and undocumented immigrants actively contribute to our economy.

Amidst it all, Trump appeared, a man who campaigned on an openly xenophobic platform and has implemented many anti-immigrant policies. Since the 2015 primaries and 2016 presidential election, Trump’s rhetoric has normalized a new wave of hate toward foreign nationals.

The Trump administration’s adoption of a zero tolerance policy toward illegal immigration and its general rhetoric about all immigrants has not only negatively impacted undocumented immigrants but documented immigrants as well — including my family. An increasing number of foreign nationals, regardless of how long they have lived in and contributed to this country, have been at the receiving end of countless xenophobic attacks. The president’s actions have facilitated, if not encouraged these attacks. In just the past year, the number of Republicans who agree with the president’s rhetoric that foreigners harm the national identity became a majority, rising from 44% to 57%, according to Pew Research Center.

Trump’s controversial executive orders — such as the highly selective travel ban on Middle Eastern countries, an unwillingness to take in refugees and a family separation policy of separating children from their parents at the border — have made it challenging for both immigrants and non-immigrants, including myself, to feel proud of being an American.

Up until a few months ago, my choice of emphasizing my Chinese German ethnicity had been easy. Even in my first draft of this article, I wrote that I chose to disregard my citizenship and to define myself as “un-American.” I believed that embracing my American nationality would betray my German Chinese heritage. But after going back to revise, it occured to me that I didn’t need to choose one or the other. Regardless of my heritage and upbringing, being American is just as much a part of my cultural background as being German and Chinese.

The realization that although the president is the leader of this country, he does not represent the entirety of the American people, has helped me accept my American identity. Freedom of speech, a core value of this country, is what allows me to be an American and still disagree with the government and even protest which, as my Chinese mother often reminds me, isn’t something all people are able to do.

Had I grown up anywhere else in the world, I probably wouldn’t have the same perspectives on political issues or worldview that I do now. That’s why I consider myself American; not only because I was born in this country, but also because I feel as though this country has made a profound impact on shaping my values and who I am as a person.

Being American doesn’t require having an American parent or American heritage. Shopping at Walmart, drinking milkshakes and going to football games paint an archetypal image of an all-American life, but they aren’t a requirement either. And neither is whole-heartedly supporting the government and its actions. Understanding that these “requirements” are just baseless stereotypes, has enabled me to embrace exactly who I am: Chinese, German and American.