The Black and White • November 7, 2019 • https://theblackandwhite.net/66030/opinion/the-nats-were-never-supposed-to-be-here-but-d-c-celebrated-a-championship-saturday/

The Nats were “never supposed to be here,” but D.C. celebrated a championship Saturday 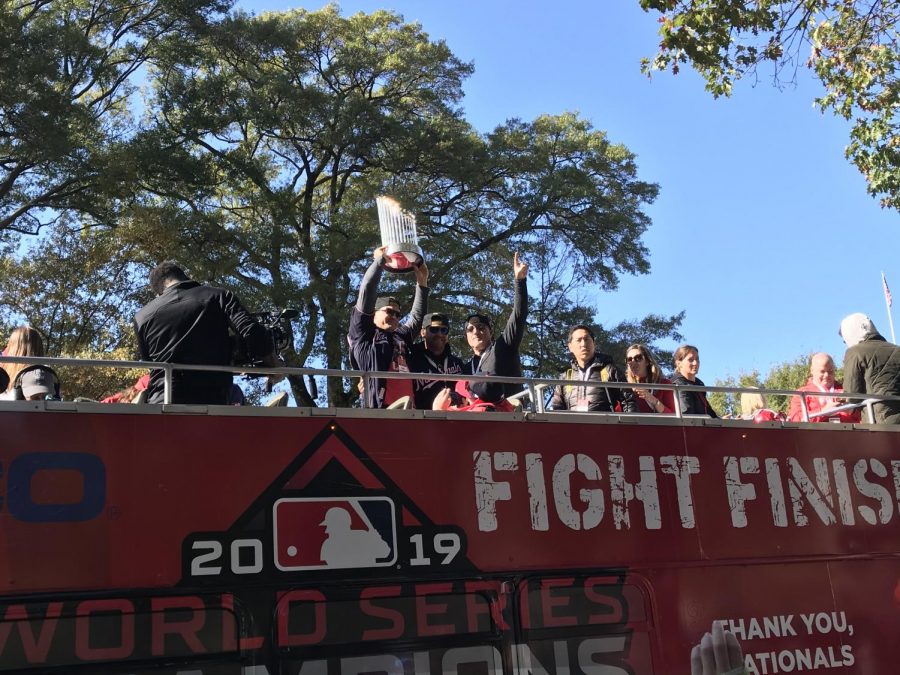 Since I was little, Nats Park has been a haven to me. I’d watch in awe as first-baseman Ryan Zimmerman made a diving play, and I’d cheer as pitcher Stephen Strasburg managed to strikeout player after player. But, in my 14-plus years of being a Nats fan, something was always missing: a World Series appearance.

I wasn’t ever going to get cocky — I just wanted to see my team make it. To host a World Series game at Nats Park would be legendary. And when the Nats managed to sweep the St. Louis Cardinals and move on to the championship, I dared to entertain the idea, even for a moment, that maybe I should hope for more.

On Oct. 30, the Washington Nationals won the 2019 World Series. I couldn’t even believe it at first — had the Nats actually achieved baseball immortality? Though I was stunned, I knew for sure that at that moment, I was glad I’d hoped for more.

Washington is officially a sports town once again. With a Stanley Cup win, a WNBA championship and now a World Series victory, few can argue that another city has witnessed as much success as D.C. has in the past two years. The Capitals’ and Mystics’ victories were terrific, but the Nat’s World Series win feels just a bit different, and for a good reason: the Nats were never supposed to be here.

To say that the start to this year’s season was rocky would be an understatement. After blowing a three-run lead in the bottom of the eighth inning May 23, the Nats fell to a season-high 12 games below 500 with a 19–31 record. It seemed like every single Nats fan was calling for Davey Martinez, the Nats’ manager, to be fired, and I was admittedly part of that crowd. MLB analysts were projecting trades for pitchers Max Scherzer and Sean Doolittle, as well as for third baseman Anthony Rendon. Disregarding the calling for his head, Davey Martinez lit a spark for the next four-plus months of the season. With each game, he gave the team a simple goal: “Let’s go 1–0 today.”

After that, the Nats caught absolute fire. Everything seemed to be going right. The Nats went an MLB best of 74–38 after May 23, and possibly the greatest moment of the regular season came when the team clinched a wild card spot in the playoffs against a struggling Philadelphia Phillies team, lead by former Nats superstar Bryce Harper.

Even after 21-year-old outfield superstar, Juan Soto, made Washington shake after a base-clearing double to win the wild card game, most analysts predicted the Dodgers would win the National League Division Series. This was understandable, especially because the Dodgers had the best record in the National League, and had just had their best season ever as a franchise. They looked nearly unbeatable on paper. But, our team seemed to have some extra fire and mojo.

Back in early May, the Nats had made an under-the-radar move by picking up right fielder Gerardo Parra. No fans nor analysts thought much of it — an aging veteran wasn’t going to do anything to save the team from their slump. But, from blaring “Calma” in the clubhouse to bringing the “Baby Shark” craze to Nats park, Parra quickly became a fan favorite and boosted the confidence and mood of anyone he came across. He acted as a catalyst for team spirit.

Inspired by Parra’s positive energy, the Nats had a dominant playoff run. They knocked off the Dodgers in five games, and then the Cardinals in four. The Nats were heading to the World Series for the first time ever, and I — along with the rest of D.C. — was excited.

Even after their dominant performance in the postseason thus far, the Nats were still heavy underdogs against the Houston Astros. Described as a “David vs. Goliath” story, few people outside of DC believed that the Nats had a chance at winning the World Series. Personally, I’m a very superstitious fan, so instead of looking at the series as a whole and predicting whether they would win or not, I avoided thinking about the end result. I just hoped that the players went into the World Series treating each game as a must-win.

The Nats quickly silenced the critics, winning the first two games and creating the chance to clinch the World Series at home. But then, they proceeded to lose three straight games, scoring a combined three runs. It wasn’t looking good for the team. Instead of coming up with excuses, Davey Martinez continued emphasizing that the team just had to go 1–0 two more times, then the city would have a parade. After a dominating Strasburg start in game six, and an unbelievable comeback in game seven, Martinez’s preaching once again proved true. The Nats were World Series Champions.

The emotions that supposedly come with winning a World Series haven’t exactly hit me yet. Right now, I’m more nervous about Stephen Strasburg opting out of his contract and Anthony Rendon’s decision to stay or leave. I think after the free agency period ends, I’ll recognize how big this victory was for the team and the fans, but right now, it just feels surreal.

Before this season, us Nats fans had grown accustomed to keeping our hopes low when the team made the playoffs. Heck, this year, most fans didn’t expect the Nats to make the playoffs at all. But now, I can live knowing that my favorite baseball team was the world champion at least once. And I, for one, can’t wait for next season.