The Black and White • November 1, 2019 • https://theblackandwhite.net/65925/news/act-reveals-change-in-test-policy-allows-students-to-retake-individual-sections/ 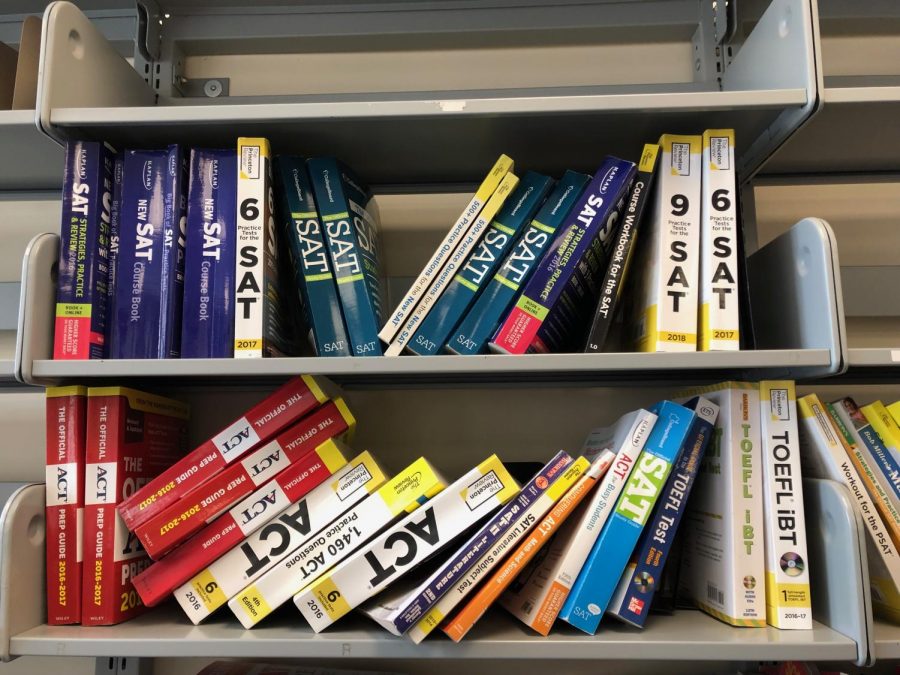 College test prep books sit on a shelf in the CIC.

The ACT will allow students to retake single test sections to improve their scores starting in September 2020.

The change came after the number of test-optional colleges — schools that don’t require applicants to submit standardized testing scores, like the SAT or ACT, when applying — increased over 25% last year.

With the change, instead of accepting a student’s highest composite score, colleges will form a composite score out of the highest scores from a student’s individual test sections. Some colleges already carry out this process, called “superscoring,” but the change to the ACT will force all schools to do this.

Some parents worry that students without the financial resources to split up the test in different sections will be put at a disadvantage. Whitman parent Ariell Grill said that the ACT’s change is just another step toward test scores becoming obsolete in the college admissions process. It’s also possible that in response to the ACT’s change, the College Board, which administers the SAT, will piggyback off this move, Grill said.

“Standardized testing is a money making business,” Grill said. “This could be a pull to get more students to take the ACT, not to actually help college admissions staff.”

SAT and ACT tutor Max Carchman isn’t sure about how colleges will respond to the decision.

“Most likely for the class of 2021 there won’t be a major effect,” Carchman said. “Colleges normally wait one full admissions cycle to take into account these major changes and make a decision about it.”

For some students, the change was a shock. Junior Peter Godschalk expects there will be an inflation of scores, making it even more difficult to get into college.

“If I knew that they were going to make this change before my ACT prep process began, I would have taken the SAT to give college a more accurate representation of my intelligence,” Godschalk said.

Taking individual sections will be cheaper than taking the entire test, which is currently $52 without the optional writing section and $68 with writing, but ACT officials haven’t released a price for individual testing yet.

Carchman believes that the change won’t have as substantial of an effect as the publicity it drew, he said.

“Most students around the country just aren’t as informed or checked in,” Carchman said. “When we look at Whitman students, they are obviously paying attention and may utilize this moving forward, but many students won’t even know how to gain this test, so they can’t benefit from it.”

For sophomores, the new policy changed their opinion on which test they were planning to take.

“I’m glad that they made the decision with enough time for me to decide I want to take the SAT,” sophomore Evan Solnik said. “I want colleges to see that I can handle the fatigue of taking a long test, and with the new change in the ACT, doing well won’t really be that impressive anymore.”