The Black and White • October 28, 2019 • https://theblackandwhite.net/65859/feature/emerging-light-student-artwork-featured-in-glen-echo-exhibit/ 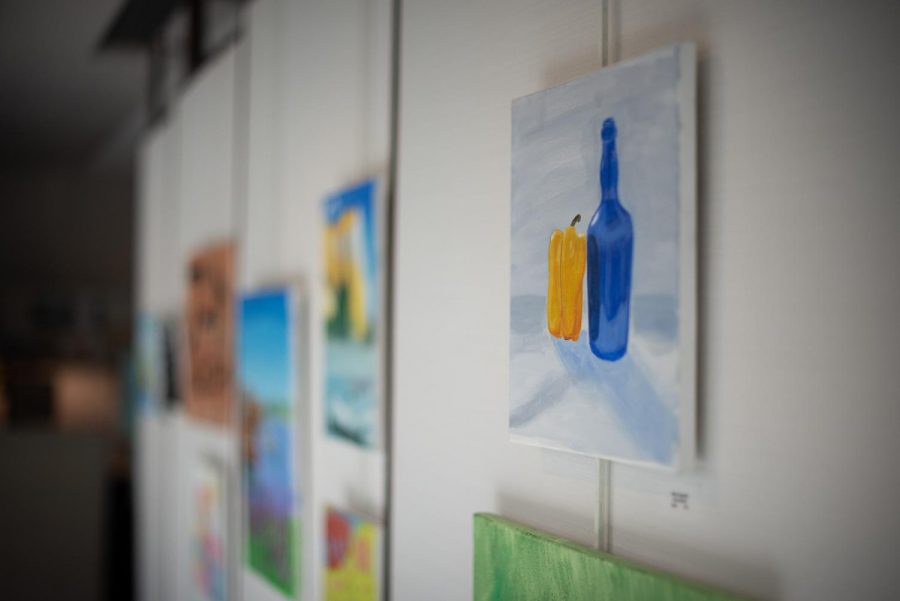 Sophomore Haley Engelstad's piece "In the Kitchen" hangs in the Glen Echo art gallery. Engelstad, with Ela Shroff displayed several works of art in the exhibit from September to October.

Ela Shroff was nervous. It was her first day of the Yellow Barn teenage drawing and painting class at Glen Echo, and after searching long and hard for an art class specifically for teens, Shroff was anxious to meet her classmates and teacher.

She had expected it to be like any typical art class: students sitting in a classroom at tables painting from some sort of reference image. What she didn’t expect was to spend her first day at a creek, climbing over boulders, getting both herself and her canvas covered in dirt in an effort to fully experience the landscape she was going to paint.

Since then, she’s grown accustomed to the unconventional class structure, and she’s even had the opportunity to display her work at Glen Echo’s “Emerging Light” exhibit, which ran from September to October. The exhibit featured local, young, up-and-coming artists — including Shroff and sophomore Haley Engelstad.

The exhibit, curated by Glen Echo art teacher Denise Dittmar, was held in the Park View Gallery on the second floor of Glen Echo’s historic Arcade Building. It featured a collection of Dittmar’s works, as well as pieces from her students, whose ages ranged from six to 30 years old. Dittmar allowed any of her students that wished to participate in the show to display one or two of their paintings.

The central artpiece of the exhibit was one of Dittmar’s paintings. Classical Impressionist style and contrast between light and dark inspired this painting which depicts a vivid, colorful scene of Brookside Garden. Displayed alongside this piece were several others of Dittmar’s works and her students’ work.

“I decided to create an exhibit that included all levels of art,” Dittmar said. “The concept was to display my own work alongside pieces of student artwork similar to my own. I tried to find works that were similar, works dealing with landscapes, light and shade and high contrast.”

Dittmar’s artistic style and teaching methods have inspired and influenced Shroff’s artwork. Though Shroff has taken Dittmar’s classes for the past three years, her passion for art goes way back. She discovered her love of art in elementary school after taking a class in Bethesda with retired art teacher Elyse Harrison.

“[Harrison] made me love art because she created a very relaxing environment, which made me want to pursue art after elementary school,” Shroff said.

Since discovering Dittmar’s class for teenagers a few years ago, Shroff has headed to the Arcade Building, where it is held, once a week. In the classroom, a window overlooks Glen Echo’s 100-year-old Dentzel Carousel; this scene inspired Shroff, and she chose to submit her rendition of the view for the exhibit.

“She was one of the few students who drew a landscape by observation,” Dittmar said of Shroff’s ability to paint from real life instead of a photograph. “That’s a sign of huge maturity. I have seen Ela try everything, and she just does not quit.”

Engelstad has also studied art with Dittmar for the past three years. Like Shroff, Engelstad’s love of painting began when she was young; her mother signed her up for a cartoon drawing class when she was in elementary school, and she hasn’t put her paintbrush down since.

Engelstad chose to display two of her works in this exhibit. The first was a still life painting of a blue glass bottle and a yellow bell pepper titled “In the Kitchen.” The second, titled “My Kind of Galaxy,” featured origami cranes glued onto a dark, speckled, galaxy background.

“My Kind of Galaxy” reflects Englestad’s artistic persona, Dittmar said. Throughout her artistic career, she has experimented with various styles, techniques and mediums. She’s even begun to experiment with incorporating wood into her art, taking inspiration from her father’s workshop in their home.

“Haley is an innovator,” Dittmar said. “She came up with the interesting sculptural approach to the origami crane painting. She has been very willing to try the things I have suggested and it’s paid off.”

Although the two artists had drastically different paintings and artistic styles on display, Engelstad and Shroff are both proud of their accomplishments and growth as artists. Englestad has a lot of artwork just lying around her room, and she was happy to finally have somewhere to display it, she said.

“Even if you don’t think that you’re the best artist, keep doing it if you enjoy it,” Shroff said. “It’s one of those things that you definitely get better at.”