The Black and White • October 25, 2019 • https://theblackandwhite.net/65840/spotlight/the-ultimate-team-poets-and-pitchers/

The ultimate team: “Poets and Pitchers” 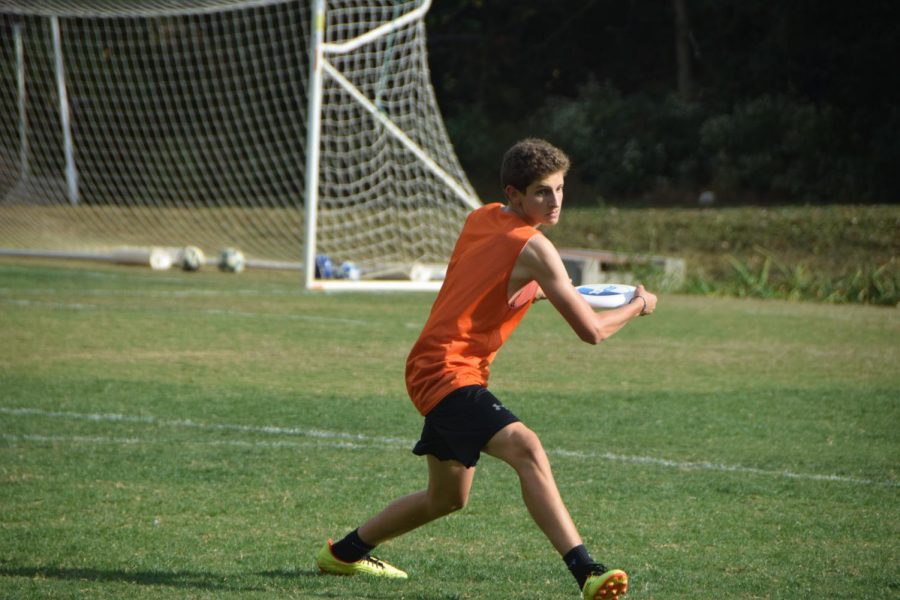 In 2012, a 13-year-old Josh Strauss (‘17) fell in love with an activity at his summer sleepaway camp. However, he wasn’t doing the typical camp activities like kayaking or roasting marshmallows; he was playing ultimate frisbee every day.

When he returned home, he missed the sport. He needed his “frisbee fix,” something Bethesda didn’t seem to offer him.

So four years ago, Strauss, along with friends Josh Eisen, Owen Krucoff from Walter Johnson, Jake Shoyer from the Field School and Joey Shoyer from the Jewish Day School formed “Poets and Pitchers,” a joint ultimate frisbee team. Strausse, Eisen and the Shoyers became friends at Camp Ramah in New England, where they started playing frisbee together. Currently, the team is ranked fourth in the state, and its membership is growing every year.

The team is so big now, they need to compete in two separate Whitman and WJ teams with players from other local schools intermingled between the two. Though the teams often compete against one another, the original camp spirit is still around — both Whitman captain Gabe Schaner and WJ captain Eliot Eisen spent their summers at Camp Ramah.

“Since the people that founded the team went to my camp, there’s this kind of ‘passing-the torch-thing,’” Schaner said. “I grew up with these people and it’s really fun to practice and compete against them.”

Though campers account for the majority of the members, many new players have joined the team this year, including several freshmen who haven’t played the sport before. Every practice, they become more comfortable on the field, Schaner said.

The team’s atmosphere is very collaborative, and the coaching staff is experienced, sophomore Danny Kotelanski said. Since the team is coed, boys and girls play the same amount of time on the field, Coach Rob Gilmor said.

“We have a solid contingent of five girls who are continuously coming out to practice,” Gilmor said. “We have promoted an atmosphere of acceptance, regardless of what level of play you’re at.”

“Ultimate” as the team calls it, also serves as an alternate sport for multi-sport athletes. Many students play during the off-seasons of their main sports because it’s easy to pick up, but still athletically demanding, Schaner said.

Senior Emma Salafsky joined the team last spring. She used to play for Woodrow Wilson High School’s all-girls team but decided to switch to Whitman for convenience. Salafsky plays on Whitman’s varsity basketball team in the winter, and frisbee helps her maintain her athleticism, she said.

“I feel like a lot of the skills carry over, which is really helpful,” Salafsky said.

Kotelanski has played on the team for two years. He started playing frisbee at Ramah when he was nine years old. The relaxed structure at practice allows for the team to get closer, regardless of whether players are from camp or not, he said.

“We have great chemistry because we have a lot of Ramah kids on the team,” Kotelanski said. “But it would be better to get more kids that aren’t so we can teach people how to play.”

Schaner is optimistic about the season after the team’s first game. Even though they lost, they still played well against Bethesda Chevy Chase, one of the best teams in the county, he said.

“I think we started off on the right foot,” Schaner said. “We could really make a run at states.”

Gabe Schaner is a Sports and Style writer for The Black & White.