The Black and White • October 23, 2019 • https://theblackandwhite.net/65817/spotlight/homecoming-pep-rally-moved-from-main-gym-to-stadium/ 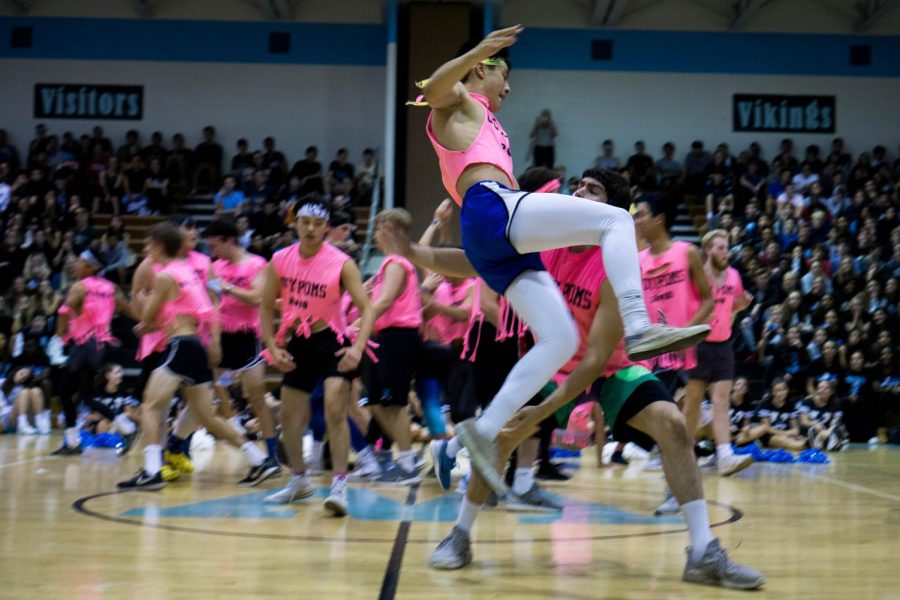 The Guy Poms perform in the main gym at last year's homecoming pep rally. This year, they will perform on the field because the event has been moved to the stadium.

This year, the SGA will hold the homecoming pep rally outside in the football stadium, rather than in its traditional location in the gym, Oct. 25. After receiving feedback from students and teachers about previous years’ pep rallies, the SGA and administrators agreed to move the pep rally outside for safety purposes and to host the entire school at one event.

The SGA traditionally holds a pep rally the Friday of the homecoming football game where students gather to cheer on the football team and watch groups like cheerleading, Poms, drumline and marching band perform.

In past years, the SGA has held two pep rallies in the gym at the end of the day; the student body split into two groups, and each group attended one of the rallies. The gym’s capacity is 800 people, and last year, 1200 people crammed into each pep rally, which breaks the Montgomery County fire code, SGA vice president William Dickstein said.

Administrators and SGA have been pushing to move the pep rally outside for a few years now, Assistant Principal Kristin Cody said.

Two years ago, teachers took a survey and an overwhelming majority said they wanted a single-period pep rally in the stadium, Dickstein said.

“My opinion is that we have a vocal minority of students that wants it inside, a larger group of students who want to try something new, and around 60 percent of the student body doesn’t care at all where it is,” Dickstein said.

Two years ago, Whitman held former principal Alan Goodwin’s retirement ceremony in the stadium. Junior Martin Kiron, who is a member of drumline this year, remembers that he couldn’t hear the music from the stadium seats and that the overall atmosphere was weak, he said.

“The music was barely able to be heard, and drumline couldn’t bring the hype,” Kiron said. “Pretty much, the general atmosphere of the gym is exponentially better than the atmosphere in the stadium.”

Other students are happy that the pep rally is outside and just one period because the entire student body can get excited for homecoming as one.

“I’m excited that they’re trying something new because the gym felt very tight at times,” sophomore Alex Masi Fleytas said. “Also, it’s nice that I can be with my friends this year because last year I was always asking ‘Who has pep rally 1?’ and ‘Who has pep rally 2?’ I think this a step in the right direction.”

Poms captain Maddie Menkes is disappointed that the pep rally will be outside this year, she said. As the team’s choreographer, she designed Poms’ routine thinking that it was in the gym, rather than in the stadium.

“Due to the up-close aspect of an indoor pep rally, you’ll be able to see more intricate movements,” Menkes said. “There are going to be a lot of movements that are going to be hard to see on the field, so we’ll have to dance really close on the track.”

Since the pep rally is at the end of October, it’s possible that the chilly temperatures could take away energy from the pep rally, Kiron said. However, junior Charlie Imperial disagrees that the temperature will negatively impact the event, but thinks that a pep rally in the gym would add another dynamic to the event.