The Black and White • October 19, 2019 • https://theblackandwhite.net/65742/opinion/whitman-should-make-an-effort-to-increase-staff-diversity/

Whitman should make an effort to increase staff diversity 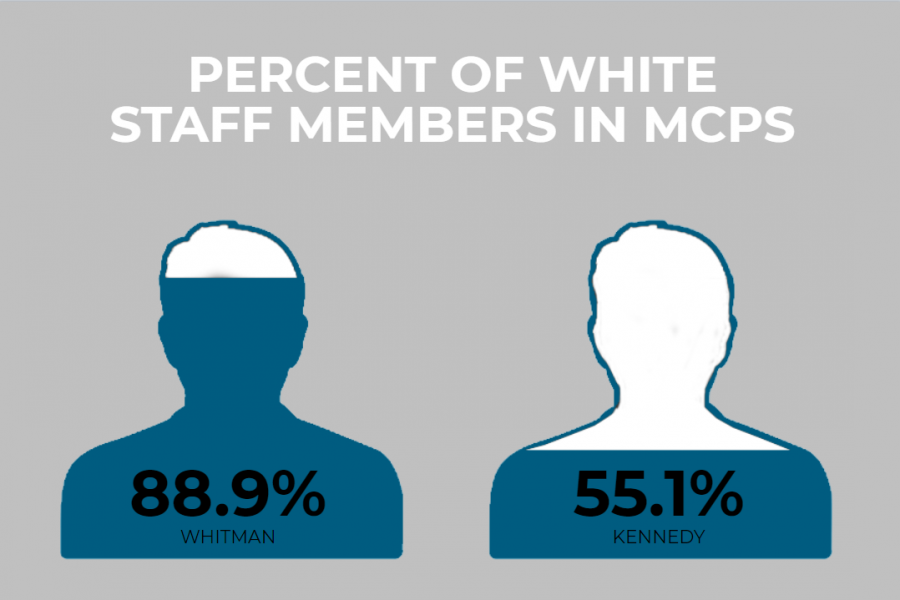 Whitman's staff is 88.9% white, much higher than some other MCPS schools.

The lack of diversity among staff members is problematic. Students would gain broader understandings of different topics by learning from the minority perspectives of other educators. In order to increase open-mindedness and spread knowledge of different cultures throughout the student body, administrators and MCPS Human Resources should prioritize hiring staff members from diverse backgrounds.

Students do notice the lack of diversity when they look toward the front of each classroom.

“In general, the less diverse we are, the less aware we are of other cultures, and we have less opportunities to have an open mind,” Whitman junior Sam Rahbin said. “Teachers have a big stage to promote new cultures, and there will be more opportunities for that to happen if the teaching staff is diverse.”

When teachers share their experiences during class, students become more knowledgeable and accepting of different cultures. According to a Drexel University article, multicultural approaches to teaching encourage acceptance and prepare students to thrive in a diverse world.

Students at these high schools said that the staff diversity creates a more tolerant environment. Though the majority of teachers at these schools are still white, the number of minority teachers is substantial enough that students feel a sense of inclusion and diversity.

“Since Blair is such a diverse place, students respect their teachers and refrain from using stereotypes,” Blair junior Joy Song said. “There’s more learning about other types of people and breaking of stereotypical thoughts.”

The Center for American Progress finds that teachers of color can also serve as role models for students of color who feel isolated in schools with lower diversity like Whitman. Omari James, one of Whitman’s few African American teachers, finds that even students of color that he doesn’t teach gravitate toward him.

“The only conclusion that I can draw is that kids appreciate having some teacher that they can relate to as being a minority in a largely non-minority school,” he said.

It’s true that MCPS may “place” teachers at schools if they have been excessed from their current positions due to population decreases—and it’s also true that the applicant pools for teachers are predominantly white. The problem is a national concern. MCPS must do what it can to recruit qualified teachers of color, and in turn, encourage administrators to prioritize these hires to better diversify the educational scope of their respective communities.

In order to increase tolerance throughout the school, administrators and MCPS must make a serious commitment to increasing staff diversity. Throughout the county, students at schools whose administrators have already hired diverse staff populations feel respected and understood. If Whitman specifically increases the number of teachers from different backgrounds, students at our school will hopefully be able to feel the same way.