The Black and White • October 8, 2019 • https://theblackandwhite.net/65540/opinion/mcps-should-abandon-extended-schedules/ 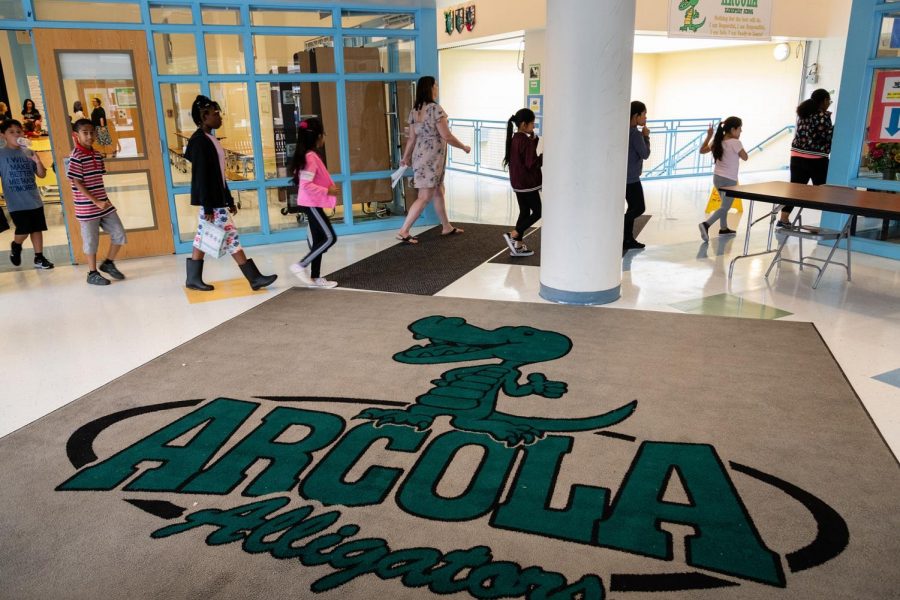 Students at Arcola ES walk to their classrooms. Arcola is one of two Title I elementary schools piloting an extended school year program. Photo courtesy MCPS.

How would you like six extra weeks of school?

As fearsome as that may seem to the average high school student, expanded schedules have become a reality this school year for hundreds of MCPS students. MCPS officials implemented an experimental schedule in two elementary schools.

In 2018, MCPS designated two Title 1 schools, Arcola Elementary School and Roscoe Nix Elementary school — which have a high population of low-income students — as “innovative schools.” This designation brings a variety of new programs, including free breakfast for students and the integration of Project Lead the Way engineering programs into the curriculum. Most radically, this new schedule added 30 extra days to the school year. Both schools finish in mid-June like the rest of MCPS, but unlike other MCPS schools, they begin in the beginning of July.

These measures are part of a nation-wide effort to fight the so-called “summer learning loss,” a phenomenon where students forget information over a long summer vacation, leading to lower achievement levels during the school year. Some think that long summer vacations are especially harmful for low-income students, who have less access to educational activities, camps and books throughout the summer.

There’s only one problem with this well-intentioned and seemingly sound program: it doesn’t work.

One notable Ohio State University study found that students at year-round schools don’t learn more than students at traditional schools. In fact, many students in countries that have less instructional time, like India and Finland, actually perform better on standardized tests than students in the U.S. Furthermore, some of the original studies on summer learning loss relied on inaccurate results and could not be replicated.

D.C. Public Schools extended their school year by four weeks for 13 schools in 2017, but they discontinued the program in 2019 due to “concerns from educators about student and staff burnout,” said Ashlynn Profit, DCPS Deputy Press Secretary.

Though MCPS’s program is different — DCPS added four weeks of mandatory instruction and two weeks of optional time, whereas MCPS has added six mandatory weeks of instruction — it will still suffer the same problems as DCPS.

The exact details of the initiatives differ somewhat, but they’re still extremely similar. Hoping that the MCPS program will have better results is wishful thinking.

If MCPS continues the expanded schedules, there’s no doubt about what they’ll see: exhausted children, frazzled teachers and a decrease in student achievement. To improve student learning, MCPS shouldn’t waste valuable resources on piloting an expanded schedule; they should focus on new ideas instead of blindly retesting old ones.