The Black and White • October 7, 2019 • https://theblackandwhite.net/65520/feature/arena-stages-jitney-is-an-amusing-must-see/ 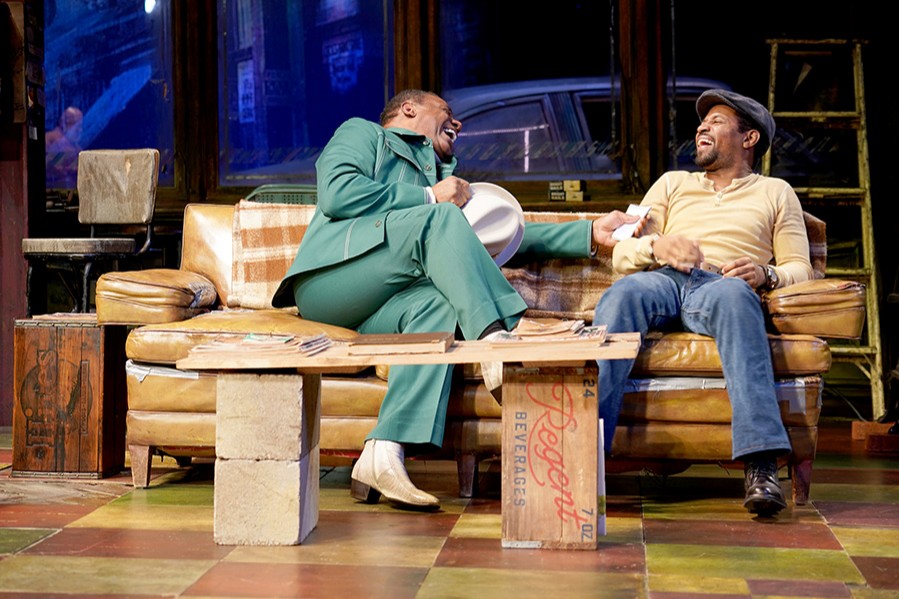 (R to L) Harvy Blanks (Shealy) and Amari Cheatom (Youngblood) in Jitney running September 13 through October 27, 2019 at Arena Stage at the Mead Center for American Theater.

Business shouldn’t be personal. But when you’re dealing with a drunk, a serial flirt and a man who can’t help but poke his nose in everyone’s business, things might just have to get personal — and even messy.

Chronicling the lives of five African American taxi drivers in the 1970s, August Wilson’s “Jitney” at Arena Stage is a 150 minute romp full of absurd humor, dynamic characters and dramatic reveals. Showcasing talented actors and spectacular technical design, the play grabs you from the first line and doesn’t let go until the final bow.

Set in Pittsburgh’s Hill District, “Jitney” relays the antics of the drivers in an unlicensed cab station — also known as a jitney. There isn’t one central plot but, rather, a web of stories and snapshots that intertwine. Connecting stories include a father reuniting with his imprisoned son, an antsy driver accusing his co-worker of infidelity and one pesky driver that the manager can’t seem to get rid of.

The actors radiate energy with every entrance and exit, keeping the audience on their toes. Fast-paced scenes of only 10 to 20 minutes and witty lines with sharp delivery give the play a sense of constant and chaotic motion. Ruben Santiago-Hudson’s brilliant direction ensures there is never a dull moment or an empty stage.

Bright costumes and a cluttered set bring the sensational ‘70s to life. Loud colors, bell-bottomed jeans and button-down jackets, cleverly designed by Toni-Lesli James, thrust the audience right into the spunky decade. The entire story plays out in just one room: the center of  jitney operations. David Gallo’s claustrophobia-inducing stage, with a peeling floor and furniture held together by tape, draws attention to even the smallest details; cab routes, prices, receipts and maps are scattered on the floors and pinned to the walls.

The actors’ energy and passion brings Wilson’s characters to life. Anthony Chisolm, a veteran of the D.C. theatre scene, plays Fielding, the main comic relief and scene-stealer. His wisecracks offset some of the hardest hitting moments of the play, keeping the overall tone lighthearted and celebratory. Stephen Anthony Jones and Francois Battiste play station-owner Becker and the recently-released former inmate Booster, respectively. From light banter to emotional arguments, the two rawly convey the heartbreaking challenges of a complicated father-son dynamic.

Among the field of talented actors, the standout performance is Amari Cheatom as Youngblood. He compellingly brings youth and energy to the short-tempered and charismatic cab driver, who lies to his wife in order to surprise her with a life-changing decision, and finds himself in hot water as a result. Every time Cheatom enters the stage, he fills the entire room with his charm and humor.

This fast-paced plot swings from outrageously funny to gut-wrenchingly dramatic instantaneously. In one scene, drivers Youngblood and Turnbo (Ray Anthony Thomas) start cracking jokes about Youngblood’s wife, but when Turnbo takes it too far, the tension escalates and Turnbo draws a gun, threatening to shoot. The initial goofy jokes make the show entertaining, but the natural tension between characters makes the show transcend just simple comedy.

Despite taking place over 40 years ago, the relevant, heavier topics in Jitney — prejudice, justice and family conflicts — keep the show meaningful and engaging. As the crew of cab drivers watches their African American neighborhood slowly gentrify, they fear losing their center of operations. Booster comes off of 20 years in prison facing the death penalty as an African American falsely accused of a crime. Through Battiste and Jones’s show stopping performance, racism’s painful mark on Becker’s family becomes real.

Although packed with heavy, complicated themes, “Jitney” never feels downcast; it feels genuine. Even in the darkest moments, Wilson’s masterpiece is a joyous look into life, work, love and finding family in the most unexpected places.

Tickets for Jitney are $41 to $105 subject to change based on availability, plus applicable fees. Tickets may be purchased online at arenastage.org or by phone at 202-488-3300. Tickets available until October 27, 2019.