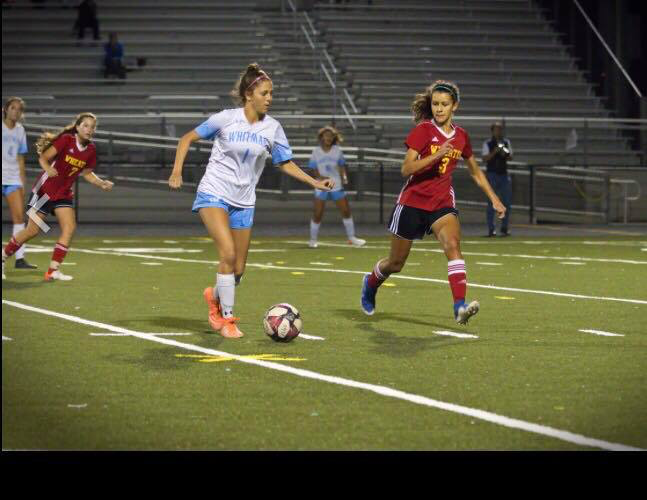 Forward Sam Rubin dribbles past a Wheaton defender in the girls soccer team's 4–0 win over the Wheaton Knights . Photo courtesy of the Wheaton Athletics Twitter.

The Vikes came out of the gate energized and motivated, scoring two goals in the first 25 minutes of the game. With 30 minutes remaining the in the half, forward Isabella Bravo shot the ball into the middle of the goal making the score 2–0. The score remained 2–0 heading into halftime.

It was the same story in the second half. Forward Delany DeMartino scored twice making the score 4–0 with ten minutes remaining. The Vikes played strong defense with the help of defender Lexi Fleck who made multiple tackles to stop goal scoring opportunities.

The team defeated the Walter Johnson Wildcats (6–2) 2–1 Tuesday night in a close game.

The game went back and forth throughout the first half with both teams stopping multiple scoring chances. With ten minutes left in the first half, forward Delany DeMartino shot the ball past the keeper making the score 1–0 going into halftime.

In the second half a Wildcat attacker slotted a shot past the Vikes goalie making the score 1–1. The game stayed even until the Vikes broke the tie when defender Riley Giles scored making the score 2–1 in favor of the Vikes. The Vikes defense held strong for the rest of the game, propelling the team to earn there fourth win of the season.