The Black and White • September 22, 2019 • https://theblackandwhite.net/65189/news/local-activists-host-town-hall-discuss-climate-change-policy-with-county-officials/ 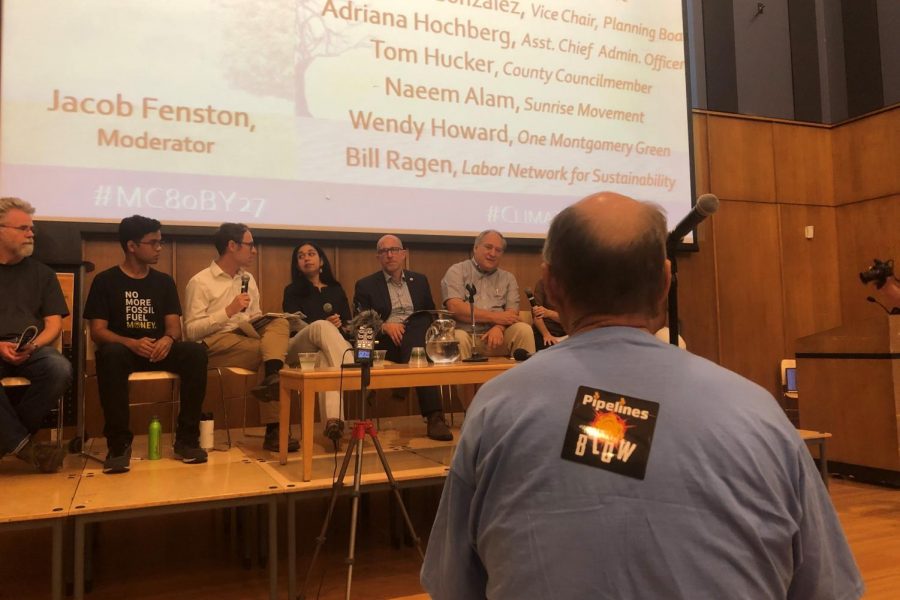 Activist Walter Weiss faces a panel of county officials and local activist. His sticker—“pipelines blow”—advocates for the banning of fracking pipelines.

Throughout the town hall, panelists emphasized the need to find a balance between environmental friendliness and cost efficiency; the officials noted the complications of gathering enough financial and human resources to make significant environmental change.

“We looked at what it would take to make this happen and it was kind of sobering,” Hucker said during the panel. “It requires a dramatic transformation, difficult policy decisions and significant resources.”

Local activist Walter Weiss asked whether the county officials were planning on making all buildings carbon-free by 2027. Hucker responded that he planned on it, and Elrich agreed, though he had reservations.

“It’s a very slow and expensive process,” Elrich said, to which the crowd responded with boos.

Residents also asked about increasing solar panelling on buildings, decreasing personal consumption of water and electricity, and switching to electric bus fleets. All of the officials said that while they supported these changes, many policies would be difficult to enact realistically.

“The scale of change is massive,” Hochberg said. “But the time frame is too short.”

Other audience members asked the officials if they had any plans to create an environmental education program; one Takoma Park resident was dismayed that none of her neighbors knew how to recycle or compost properly. Fani-González responded that the power to educate lies in the citizens. Many of the attendees were upset with this response and believed the officials deflected their own responsibilities to the residents.

“I think they could have demonstrated stronger leadership,” event organizer Doris Nguyen said. “I expect leaders to be leaders. Yes, as citizens, we also need to take action. But that does not absolve our country officials from forging the path ahead.”

“It is a climate emergency, after all,” Nguyen said. “This is not the time to be timid.”