The Black and White • September 16, 2019 • https://theblackandwhite.net/65112/news/whitman-forced-to-evacuate-after-student-assault/ 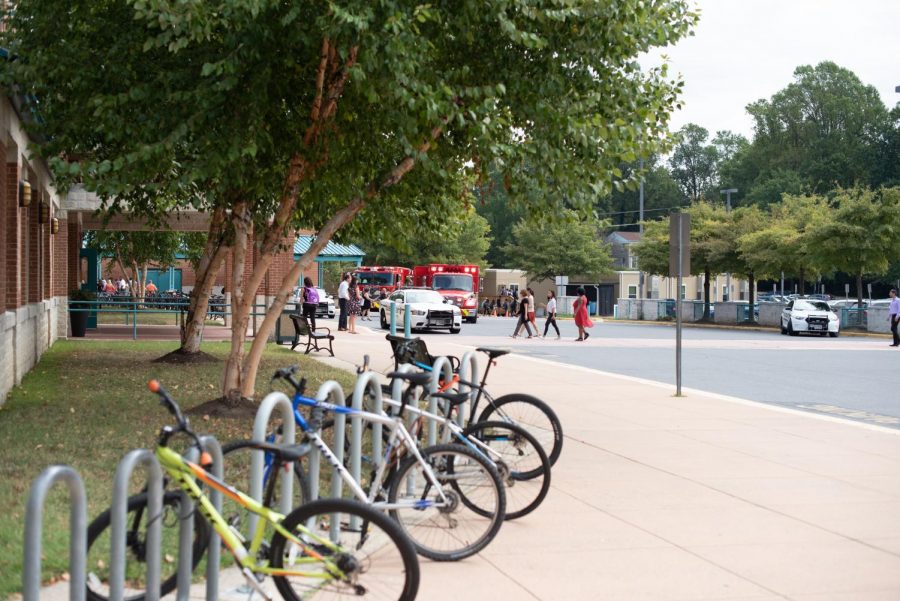 Students and teachers return to the building after the incident this morning. Montgomery County Police Department and Fire and Rescue responded to the scene. Photo by CHARLIE SAGNER

By Dana Herrnstadt and Alex Robinson

The Black & White has confirmed with several sources that this morning a Whitman student stood up in his classroom, walked to an adjacent table and began attacking another student with a frying pan he had brought to school. Sources say the attacker was not provoked today in any way, and he was arrested by the Montgomery County police following the incident.

Later, after several announcements telling students and staff to remain in fourth period, a fire alarm went off, prompting confusion.

Administration was not available for comment, though principal Robert Dodd confirmed the assault and subsequent response in an email to the Whitman community through the MCPS app. In the same email, he also stated that “safety and security are our first priority,” and referred to the attack and the alarm as “two separate incidents.”

The class was held in one of Whitman’s portable classrooms built to accommodate overcrowding during the ongoing planning and construction of a new wing at Whitman. Prior to the incident, students in the Health class were taking notes on the different types of stress.

At the start of the attack, the teacher instructed the other students to leave and seek shelter. They ran to the main office and informed administrators that an assault had occurred. Administration and security responded and called 911.

Assistant principal Kristin Cody issued overhead announcements to the school to ignore any regularly scheduled bells. In an email sent to staff at 11:06, she clarified that a “serious incident” had occurred, and to “keep students in the classroom until we make another announcement.”

At 11:15, the fire alarm sounded. After some confusion over the legitimacy of the alarm, Cody announced over the loudspeaker that the building was to be evacuated.

Students and staff then evacuated without incident. They waited outside until 11:35, when everyone reentered the school and their classrooms.

Given the national trend and concern over school violence, the school was on edge about this morning’s events.

“I saw the look on some of the students’ faces,” English teacher Cody Therrien said. “They were legitimately anxious, frantically texting home. It was hard to watch.”

Senior Lily Goldberger was in the portable next to where the attack occurred, and she was playing a Jeopardy-style review game with her AB Calculus class when she saw students running out of the adjacent classroom. Though the lesson continued until the fire alarm sounded, many students in her class were scared that the incident was a shooting, she said.

“If it was a shooting, and he came into my class, I would have been the first one there,” senior Lily Goldberger said. “I was right by the door.”