The Black and White • June 13, 2019 • https://theblackandwhite.net/64788/feature/choral-director-jeff-davidson-retires-after-37-years-of-inspiring-students/ 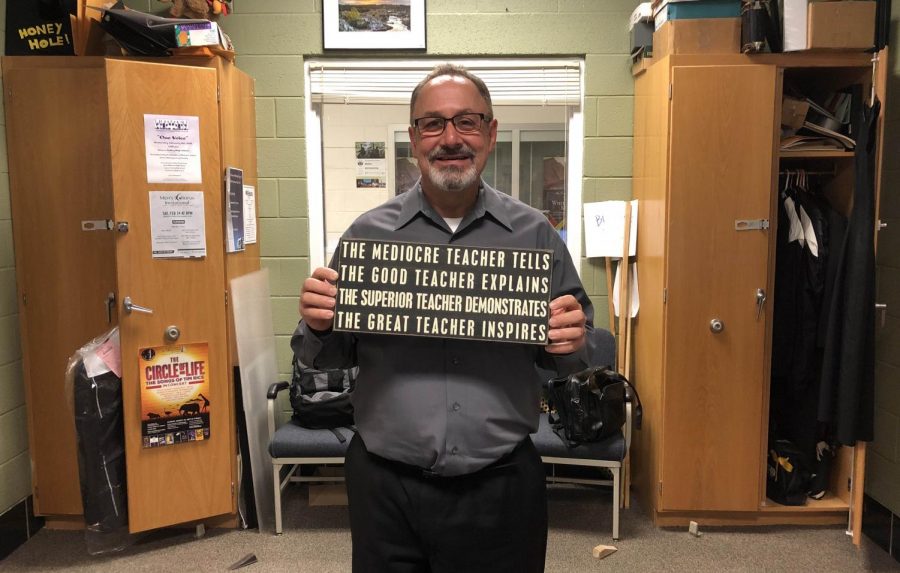 Chorus teacher Jeff Davidson holds up a sign he considers his inspiration for teaching. Davidson's relationship with his students is like that of an "uncle, a mom, or dad," he said.

Choral director Jeff Davidson has a simple philosophy when it comes to teaching: the mediocre teacher tells, the good teacher explains, the superior teacher demonstrates and the great teacher inspires. Students consider Davidson one of the greats.

Davidson is retiring at the end of this school year after 37 years of teaching. The announcement came as a sad surprise to teachers and students alike.

“You just know it’s time—time to move onto another phase of your life,” Davidson said.

Davidson started his choral teaching career at John F. Kennedy High School, but after a combined concert with Kennedy and Whitman in the early 1980s, the choral director then at Whitman recommended Davidson as his replacement.

Here, he has overseen the growth of the music department and expanded the school’s three choral ensembles to five. His classes have won many awards throughout the years, including numerous first place awards at national music festivals and superior ratings at MCPS choir competitions.

Davidson’s influence extends beyond the classroom walls. Hundreds of his former students have remained a part of the close-knit Whitman music community, many have continued their musical interests in college and have music careers.

Students see Davidson as a sympathetic and compassionate teacher who has shaped their lives in other areas besides chorus. Junior Lucas Arulpragasam, who has taken chorus since freshman year, said that Davidson noticed when he was sad or stressed and helped him talk through his emotions. Davidson made him feel cared for and helped him find direction, he said.

Junior Brynn O’Connor remembers the easygoing atmosphere in his classroom.

“He made chorus a safe environment to learn and have fun, but still be able to be serious about chorus and love it,” she said. “It’s sad, but I think he’s ready to move on.”

Some of Davidson’s favorite memories include conducting his choirs on the stages of Carnegie Hall, the Kennedy Center and at Strathmore during their annual music trips. Ultimately, his students made his time at Whitman memorable, he said.

“The day-to-day working with Whitman kids was the best part of it,” Davidson said. “It’s a pleasure to be associated with so many fine young people.”

“Him retiring was the right decision for him because he put so much work into the program, and he deserves the rest,” Silver said. “Since he built such a strong program, it will be able to continue on with the foundation that he built for a long time.”

Since he has met a lot of his goals for the program during his time at Whitman, Davidson is ready to start another chapter in his life, he said. He hopes to stay productive in his retirement and is contemplating starting a dog walking business with instrumental music teacher Terry Alvey. Although he’s looking forward to a move away from the often stressful routine of teaching every day, he will miss seeing his students, he said.

“Academic teachers’ students change every 18 weeks or every year,” Davidson said. “They only get to know a certain number of students, but we get kind of attached. We are like an uncle, a mom or dad in a way—that’s a pretty special deal.”