Give us coffee or give us death 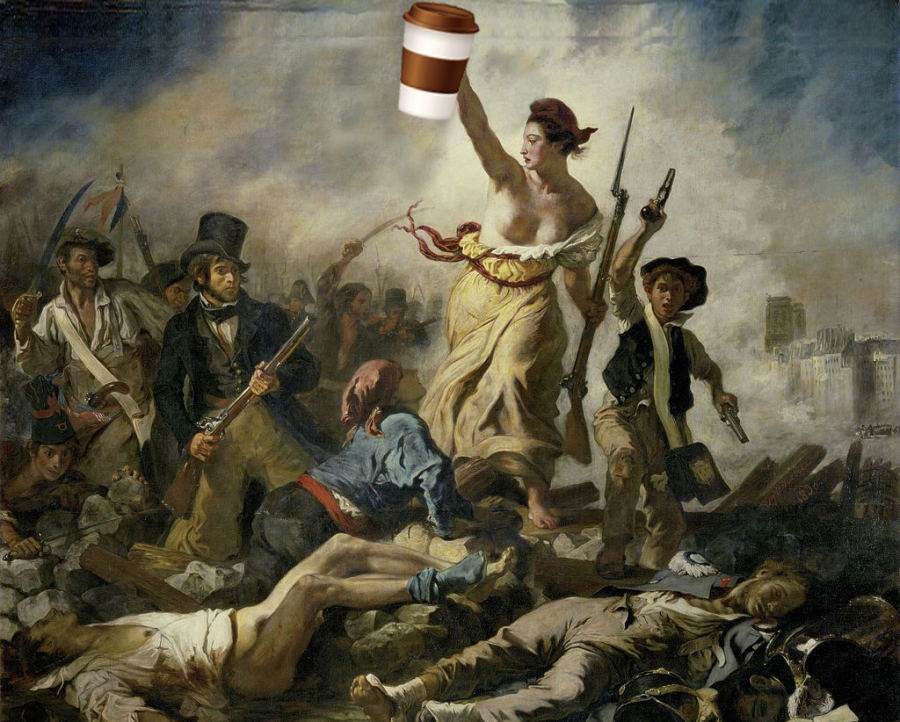 As I sit down in my AP World History class, I’m thrilled. I’m thrilled because on this beautiful Monday afternoon, I will have the exciting opportunity to demonstrate my extensive knowledge on topics ranging from the Bantu Migrations to the Sinification of Vietnam.

Following some inspiring words from Ms. Eagan, I begin my exam. Those 55 questions and that fearsome scantron are no match for my mind, sharpened by study and enthusiasm.

But alas! Fifteen questions in, much to my dismay, I’m overcome with overpowering fatigue. Though my will to remain awake stays strong, my eyelids flicker shut. I wake up with fifteen minutes left in the period and stumble through the last 40 questions.

As President George W. Bush once said, “fool me once, shame on you. Fool me twice, you can’t get fooled again.” The next exam rolls around, but this time, I learn from my mistakes and head to the cafeteria to pick up a steaming cup of stimulating, caffeinated coffee.

But before I can proclaim my mission accomplished, tragedy strikes.

The sticky container of dark brown liquid holds not the shakey joe I so deeply crave, but rather a hollow imitation, an uncaffeinated substitute meant solely, it seems, to make a mockery of my struggle.

I ask the lunch lady where the real, caffeinated big boy juice is, but she’s a stone wall. No coffee for students, she says. Only for the teachers, she taunts.

I leave the cafeteria in shock and launch myself into a coffee-centered investigation. To my horror, I discover that our Maryland representatives, elected to protect our rights, have stripped us of them; in 2014, they banned the sale of caffeinated drinks in schools. I stagger to class, disheartened, and history repeats itself.

This SAD! occasion, so tragic yet so preventable, presents a sin to be rectified. For the sake of our grades, for the sake of our morale, it’s imperative that the school makes caffeinated coffee available to all students.

But why bother taking on the Man? For this, I have a simple answer: justice, unlike me in AP World, never sleeps.

First, it’s critical to understand that at the root of this bitter struggle is students’ drastic lack of sleep. An informal study of 56 Whitman students showed that our young scholars sleep an average of six hours a night—two hours shorter than our recommended eight hour minimum. We don’t have the time to recover from days filled with studies, sports and socializing.

Coffee can help with this. Caffeine binds to adenosine receptors in the brain, tricking cells into thinking that they’re awake. Coffee keeps us alert; it provides a service that our late bedtimes can’t give us.

But schools ban our elixir, and the Big Men tell us that caffeine raises heart rate and blood pressure, contributes to anxiety and may cause gastric distress in some people. While that may be true for some students, it’s not fair to deprive the entire student body of caffeine.

To be clear, Maryland bans caffeine not because of coffee, but rather in an attempt to restrict student access to energy drinks like Red Bull and Monster Energy Drink. That makes sense—in 2011, a Maryland girl died after drinking just two energy drinks.

But it’s absurd to ban coffee as well as energy drinks. Sure, coffee might make students a bit jittery, but as Benjamin Franklin, a known coffee enthusiast, once said, “they that can give up essential liberty [ie. coffee] to purchase a little temporary safety [ie. not being jittery], deserve neither liberty nor safety.”

Beyond that, like any prohibition, people easily get around it. Students aren’t banned from bringing coffee from home. My peers stroll through our halls sipping Caramel Mocha Chai Tea double shot skinny lattes from Starbucks anyway. Furthermore, coffee-lovers with cars can simply leave campus and go buy coffee. If the school seeks to save the children, it’s doing a terrible job.

And so we poor, mug-less, car-less losers are left to suffer without caffeine.

The school isn’t helping us. No, it’s depriving us of our sleep, and then taking away what could aid us. We need coffee and that’s the tea.