The Black and White • June 12, 2019 • https://theblackandwhite.net/64754/feature/students-celebrate-lgbtq-community-at-capital-pride-parade/ 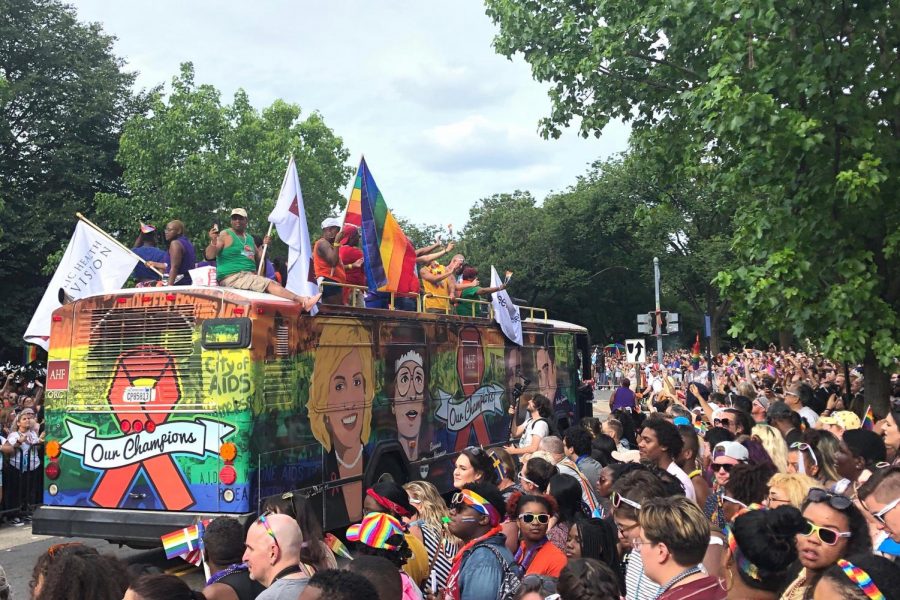 A float in the streets at the 44th annual Capital Pride Parade on June 8 in Washington, D.C. Photo by LEXI FLECK.

Among these Whitman students was sophomore Hisham Shami. Shami attended the parade because of the inclusive atmosphere and the feeling of belonging; he also went to the parade to celebrate how far the LGBTQ+ community has come.

“Pride in itself is just a representation of the struggles and the troubles that the community has faced through the years,” Shami said. “To see all these large figures and headliners dancing and singing in the parade is just impactful on me, beyond words.”

Sophomore Ava Berger attended the parade this year as a way to come out to her friends and family as bisexual; she wanted to come out surrounded by accepting, supportive people.

However, near the end of the parade, police officers flooded Dupont Circle in response to false reports of gunfire. Thousands of people, filled with fear, ran aimlessly through the streets of D.C., resulting in several serious injuries. When Berger heard the rumors of gunfire, she jumped off a float and ran for “what I thought was my life,” she said.

“Even after we found out it was a false alarm, that feeling of panic never fully went away,” junior Lily Cork said.

While the goal of the parade is to spread love and acceptance, the events following the false shooting rattled the parade-goers.

“The Pride Parade is supposed to be a safe place for people to feel comfortable,” Berger said. “But I had never been more scared.”