The Black and White • June 12, 2019 • https://theblackandwhite.net/64741/feature/for-sophomore-musician-jordan-bell-the-skys-the-limit/

For sophomore Jordan Bell, “the sky’s the limit” when it comes to music 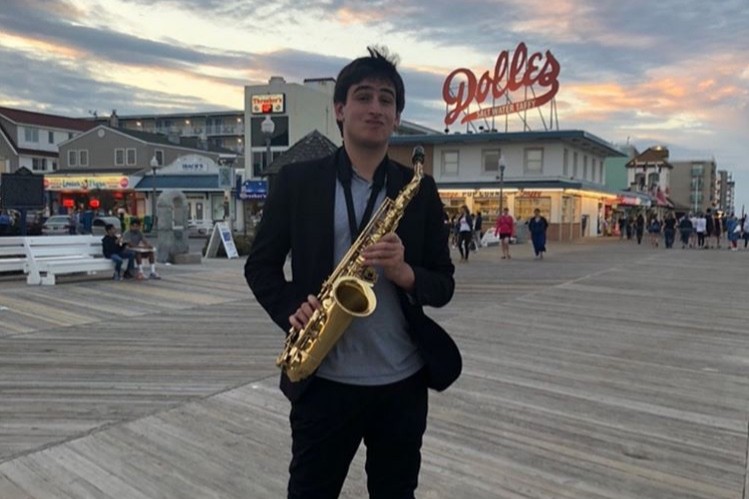 Sophomore Jordan Bell has played the saxophone since he was 9 years old. Now, in addition to playing in Whitman's Jazz and Symphonic bands, Jordan plays the in the Paul Carr Jazz Academy of Music Orchestra and the Blues Alley Youth Orchestra outside of school. Photo courtesy Jordan Bell.

When sophomore Jordan Bell was seven years old, his parents signed him up for piano lessons. Eventually though, after years of listening to his parents play jazz music on road trips, he grew to love jazz’s groovy and improvisational nature.

When Jordan was around nine years old, he decided to pursue the saxophone. He borrowed a saxophone from his dad’s boss’ son and hasn’t put it down since.

Now, Jordan is a part of four bands: the Whitman Symphonic Band, the Whitman Jazz Band, the Paul Carr Jazz Academy of Music Orchestra and the Blues Alley Youth Orchestra. He also performs freelance gigs at weddings and restaurants, and has recorded four albums—three with the Blues Alley Youth Orchestra and one private solo CD. In addition to piano and saxophone lessons, Jordan taught himself the flute and clarinet, and an elementary school teacher taught him blues guitar.

Jordan also sings; he’s been a part of every Whitman musical and talent show in the past two years—either on the stage or in the pit orchestra.

Most of Jordan’s talent comes from his father, Bill Bell, Jordan said. Bill played the oboe and piano when he was younger, and he wanted his son to pursue music because it’s a “good way to develop confidence,” Bill said.

When Jordan was younger, his family always stopped by music stores while walking in D.C.. Jordan would stare at the instruments through the window.

Jordan used to tap out rhythms on any and every stick he could find on the ground. Since then, Jordan has evolved into a more experienced musician, swapping sticks for actual instruments. Watching Jordan grow musically has been inspiring, Bill said.

“It’s a great activity,” he said. “I’m very pleased that he’s enjoying it so much and showing a lot of promise in it.”

The adrenaline that comes with performing in front of a crowd is the best part of concerts, Jordan said.

“I feel like I can always bring something new to a performance,” he said. “If I mess up one time, I can just do it differently the next time.”

Since music takes up a quarter of Jordan’s day, he’s able to learn new pieces frequently, and Whitman’s instrumental director Terry Alvey pushes him to improve and take opportunities, he said.

“He adds a lot of energy,”  Gilbert-Lawrence said. “He’s friends with everyone and he’s a phenomenal saxophonist.”

Jordan’s natural confidence matched with a small ego to make for a well-rounded player and his style ideas are “wise beyond his years” Alvey said.

“He’s super creative in his playing,” she said. “He’s got beautiful sound. He’s a really mature player. For somebody in the tenth grade, he’s super talented.”

The saxophone is the most commonly played instrument at school, which makes getting into jazz band very competitive. Not only is Jordan in the jazz band, but he plays also lead alto —one of the most competitive instruments—and he’ll likely move up to the wind ensemble, Whitman’s most advanced band, next year, Alvey said.