The Black and White • June 12, 2019 • https://theblackandwhite.net/64714/feature/red-yellow-and-green-learning-about-thai-art-history-through-the-colors-of-curry/

Red, yellow and green: Learning about Thai art history through the colors of curry 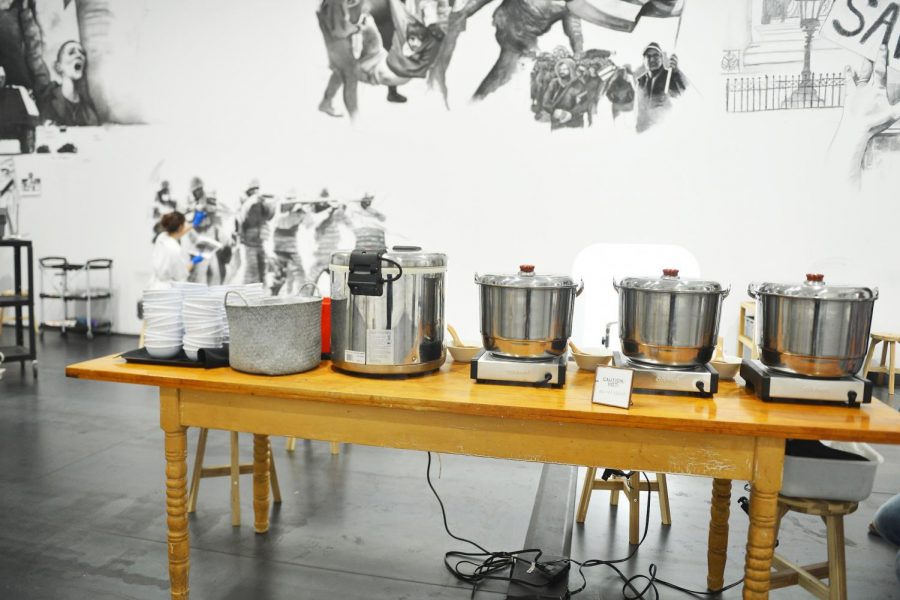 To artist Rirkrit Tiravanija, art isn’t just a flat image on a wall. Art should be observed, touched and even eaten. Tiravanija believes in the idea of relational aesthetics—an artistic movement that emphasizes art’s collaborative, engaging nature.

The Hirshhorn Museum in D.C. is featuring one of Tiravanija’s exhibits, Who’s Afraid of Red, Yellow, and Green—which includes murals, documentaries and food centering around Thai culture. He’s displayed exhibits in Bangkok, Thailand and New York City, and he’s the first contemporary Thai artist to have an exhibit at the Hirshhorn.

Colors play a central role in Tiravanija’s exhibit—red, green and yellow are present in every painting, film and even spices in the food.

Tiravanija is widely known for his communal, Thai-food based approach to art. He seeks to capture social and political issues of our time through smell and taste. Pots filled with curry sit in the center of the exhibit, converting the art gallery into a kitchen. The red, yellow and green spices in the curry resonate with the colors of the different political factions in Thailand. To Tiravanija, political art forces viewers to have difficult conversations and become part of the exhibit.

“By bringing food into a gathering space, Rirkrit can encourage different sorts of interactions,” Betsy Johnson, assistant curator at the Hirshhorn Museum said. “Art galleries are very pristine. He wanted to break that down. Promoting interaction is the core of Rirkrit’s project.”

Local Thai restaurant Beau Thai provides curry for the exhibit, which is offered free of charge to exhibit-goers. The D.C restaurant collaborated with Tiravanija’s studio to create recipes that match the exhibit’s color palette.

Another section of Tiravanija’s exhibit boasts a collaborative mural for both D.C. and Thailand. Local artists painted scenes conflicts in Washington, D.C, and for Thailand he had artists draw militias and detailed scenes of the protest. One portion includes Martin Luther King Jr. next to the capitol building; another portion depicts 2010 protests in Thailand. Viewers can also add their own drawings— they’re meant to feel like they’ve been transported to South East Asia and are witnessing protests against the Thai monarchy.

“I was so excited when I discovered I was able to draw on the mural,” sophomore Althea Dulany said. “It’s such a collaborative exhibit—the artist wanted the art enthusiasts to help draw.”

Johnson has worked to organize the muralists for months. Tiravanija chose a handful of artists in the D.C area to help make his ideas come to life, she said. One of the artists who worked on the mural was local graphic designer and muralist Keyhan Lee.

“Rirkrit was in search for artists who were used to drawing on walls,” Johnson said. “Walls are much rougher than a canvas. We looked for muralists; that’s how we found Keyhan. It really just happened organically.”

Lee’s work often explores textures and different layers of art. He’s admired Tiravanija’s art for as long as he can remember.

“We think about it like we’re musicians in a symphony that Rirkrit has conducted,” Lee said. “He’s conducting us, and we’re kind of like extra hands for him.”

Tiravanija’s exhibit also included video documentaries that reflect the scenery of present-day Thailand. These films weren’t specifically made for this exhibit, but Travaija wanted to incorporate them to visually represent his home country. Like the rest of his work, the videos’ main color templates are red, green and yellow.

These colors are also prominent in the exhibit’s series of short films, which Thai filmmaker Apichatpong Weerasethakul produced. In another room, people can watch George Englund’s 1963 feature film set in Southeast Asia, The Ugly American, a movie Tiravanija watched as a child.

The unique cultural perspective of a non-Western, southeast Asian artist fascinated senior Maya Valencia, who is going to art school next year.

“It’s really important seeing the art of other cultures, especially since a lot of art is focused on the classic western artist,” Valencia said.

The interactive nature of the exhibit, combined with Tiravanija’s fresh perspective, have contributed to its success and admiration.

“Art is a social activity,” Johnson said. “The interaction that happens between people can become artwork. Art can be a gathering; it can be a conversation.”