The Black and White • June 7, 2019 • https://theblackandwhite.net/64656/opinion/blogs/a-year-after-the-caps-win-heres-why-we-love-sports/

A year after the Caps’ win, here’s why we love sports 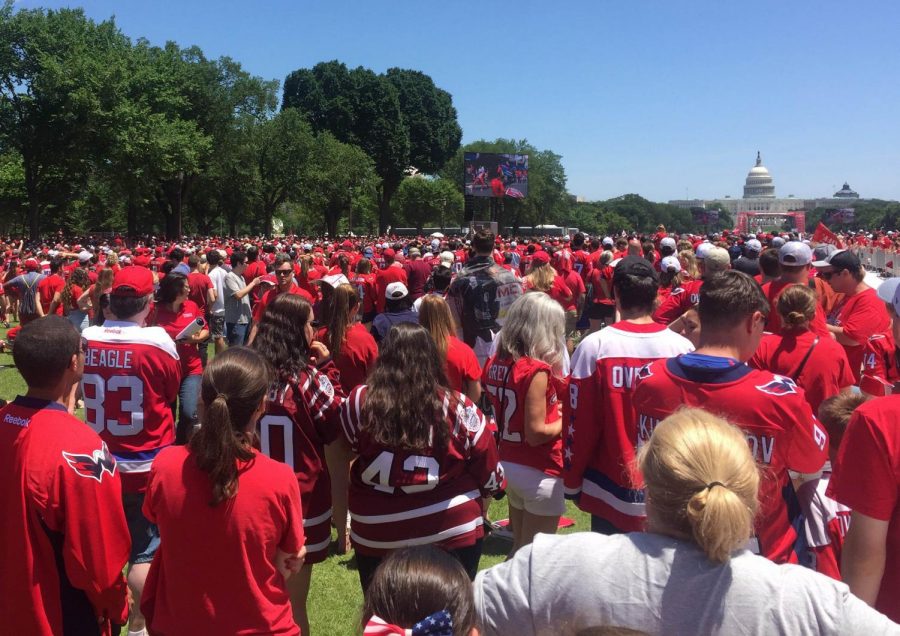 On the one-year anniversary of the Washington Capitals' Stanley Cup title, here's a Cap(s)tion. Thousands of fans celebrate their teams' victory in this Capitals capitol event. Photo courtesy Brielle Ohana.

I’m not someone you would consider an athlete. I don’t play on a sports team, and I certainly don’t know what it feels like when a 200 pound hockey player checks you into the boards. But even though I have no interest in actually throwing a ball or running a mile, I’ve always loved watching sports.

During game three in the first round of the Stanley Cup playoffs last year, I clutched a pillow over my mouth to muffle my screams and cheers at every nerve-wracking play. Each time the Washington Capitals scored, I jumped from my usual seat on the floor and hollered in excitement. I was so absorbed in each play that when the game went into overtime, I started to feel my stomach flip and my hands begin to sweat.

For me, sports have always elicited these dramatic reactions. When I’m watching a game, everything disappears except for the two teams on the screen.

When I’m tired after a long day at school or upset after fighting with my friends, I can turn on NBC Sports Washington; when the Caps’ puck drops at seven, all my worries disappear. For at least an hour, the ante is raised, the adrenaline is pumping and the hope for a win is the only thing that matters—I’m completely in the moment.

Growing up, I bonded with my dad over watching the Caps play hockey. Whether we were watching from a stadium or our living room, our spirit remained the same—so much so that, on more than one occasion, my mom yelled at us to quiet down.

To this day, we’re the crazy fans who travel to watch minor league hockey games because according to my dad, there’s “always more fighting in the minors.” Before I was born, my dad and grandpa were the over-enthusiastic sports fans in the family. Now, sports are something our whole family bonds over; they bring generations together.

Last year during the Caps’ playoff run, it seemed like every single person living in D.C. came together in support. For what felt like the first time in the history of our nation’s capital, it didn’t matter if you were a Democrat or a Republican. Together, the whole metropolitan area chanted until our throats were dry and our voices were gone. We high-fived strangers, lined up in the street wearing all red and all through the following summer, if you wore a Caps shirt in public, people would greet you with an enthusiastic “Let’s go Caps!”

Team spirit unified all of us, and to me, that’s what’s so special about sports. Sports are about uncertainty and high-stakes. They’re about community and loyalty; they bring people together. Losing stings more than anything, but winning—and the wave of excitement that comes with it—is worth every minute of anticipation and every nerve-wracking moment in the world.