The Black and White • June 7, 2019 • https://theblackandwhite.net/64639/feature/art-teacher-nancy-mornini-to-retire-after-20-years-at-whitman/

Art teacher Nancy Mornini to retire after 20 years at Whitman 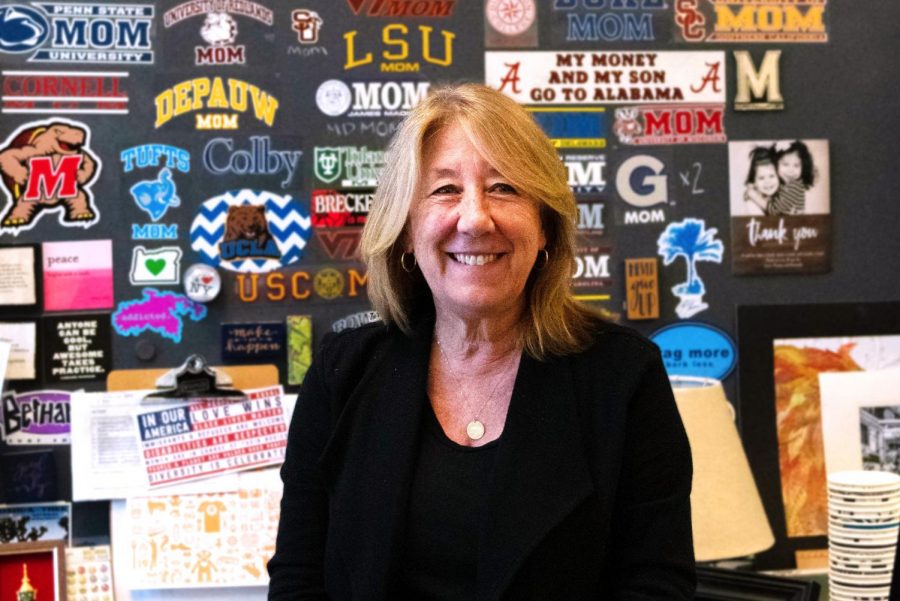 Art teacher Nancy Mornini poses in front of her sticker wall. Mornini will retire this year after 20 years of teaching at Whitman.

If someone were to walk into room D-212, they would think art teacher Nancy Mornini has a family of 50. Numerous college stickers like “Arizona State University mom” and “Tufts University mom” completely cover the blackboard next to her desk. Confused parents at back to school night always ask her how many kids she has, Mornini said. But the stickers aren’t from her kids; they’re gifts she receives from students when they commit to college each year.

Mornini will retire at the end of this year after 20 years of teaching art at Whitman. She has contributed to the community throughout the years, from creating T-shirts for numerous events to forming Whitmaniacs, the school’s spirit club.

Before working at Whitman, she taught art at Chestnut Lodge, a psychiatric hospital in Rockville. She was notified of an opening in the art department at Whitman in March of 1990 and decided to switch jobs; she was ready for a change, she said.

Since she began working at Whitman, her selflessness and willingness to help others has been evident. When basketball player Marie Hatch (’16) broke her ankle during a playoff game, Mornini designed Whitman basketball T-shirts with Hatch’s number 25 on the back for the whole team to boost morale.

“She is just the most giving person,” girls basketball coach Peter Kenah said. “She’ll always say, ‘whatever you need, let me know,’ and then she follows through with it. Whatever it is, she makes time for it.”

Mornini’s own high school emphasized school spirit and hosted different activities throughout the year, and she wanted to replicate some of that spirit with Whitmaniacs, she said. She started the club in 2007 with the help of a couple of her students on the football team.

Whitmanicas has created numerous school spirit shirts and shirts for different events, like Battle of the Classes and Homecoming, but they have also created shirts during more serious times, like when the radical Westboro Baptist Church came to Whitman to protest the school’s namesake in 2009, or in 2017, when two students and one alum died.

“I like making shirts because it’s a way to unify everybody in the community,” Mornini said. “The Whitman Strong shirts were originally just for teachers, but they grew in popularity and found a way to bring people together during that tough time.”

Breaking the news of her retirement to her classes was emotional for Mornini and for her students, she said. Students and teachers don’t just see her as a teacher or colleague, but as a friend.

“She has a really personal connection with all her students,” sophomore Jordan Lerner said. “You can trust her—she’ll always be there for you if you need her. It’s going to be really hard to fill her shoes.”

Mornini debated between retiring this year or next, since she’s close with many juniors. She ultimately decided that the timing was right for her to leave now, she said.

She plans to stay around by substituting next year. And while she doesn’t see herself being a full-time art teacher again, she still wants to make art and hopes to take art classes, she said.

The bonds that Mornini has created have been her favorite part of working here, she said. Her relationships last beyond graduation; she often keeps in touch with her former students and becomes friends with them on social media.

“I’m going to miss the people. That’s going to be really hard for me,” Mornini said. “I’m a real people person and like being connected, and I like being busy and having a purpose, so I’m going to have to redefine what my purpose is.”

After she leaves Whitman, Mornini plans to help her husband, Joe, run Team River Runner, a non-profit organization he started in 2004 to help veterans and their families heal and find a community through paddle sports. The organization has become a huge success, growing to 65 chapters across the country.

“The veterans are like our family,” Mornini said. “I have my own family, my Whitman family, and my Team River Runner family, and I’m excited to spend more time working with them.”