The Black and White • June 2, 2019 • https://theblackandwhite.net/64524/feature/sports-photographers-capture-the-action-in-front-of-the-lens/

Sports photographers capture the action in front of the lens 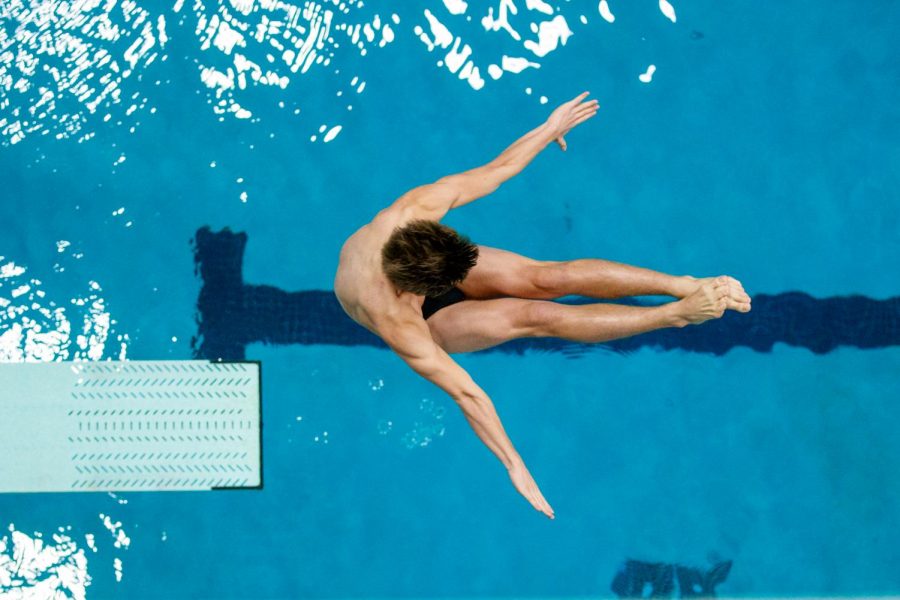 You wouldn’t know it, but swim and dive team photographer Adam Hirsh has always been afraid of water. During his four years photographing the team, he routinely bent over the edge of the 10 meter diving platform—12 feet of water below him—to capture a swimmer’s backstroke start or a diver’s inward tuck from above.

“I always ask permission from the managers if I can go up there and they’ve always said yes. They usually say, ‘oh, just don’t jump,’” Hirsh said. “Trust me, besides the fact that I have a lot of expensive equipment, I’m not jumping from the 10-meter platform. I’d be the last person to.”

Fans don’t know that Hirsh has a fear of part his job, and sometimes they may not even notice a sports photographers’ presence at all. Sports photography encapsulates everything from action shots of athletes, to the bench’s reaction after big plays, to the fans on the sidelines. For high school athletes, these photos can preserve great memories or promote big games.

“One big part of these photos is advertising your sport, and using them to get more fans to come to your games,” girls soccer player Meagan Olsen said. “It’s nice to show the Whitman community who they’re supporting.”

For college or professional sports, photos can be used on school websites or in advertising. The University of Vermont used freelance photojournalist Alex Edelman’s (‘09) photos for promotion during his time at the school.

“For basketball, I shot every game my senior season, including road games,” Edelman said. “The university was pretty happy about it because it was like free marketing. They would use the pictures to promote the program.”

Despite the impressive shots, most sports photos never see the light of day. Hirsh averages about 2,500 to 3,500 photos per event and ends up deleting around 90 percent of his shots after editing for about 10 to 12 hours, he said.

Even though photographers mostly photograph action shots during the game or meet, quieter moments are sometimes worth capturing. While shooting the Washington Capitals, Edelman spent weeks trying to photograph goalie Braden Holtby spraying his water bottle and wetting his hair. At the start of the game when the team skates onto the ice, only rotating spotlights light up the rink, so Edelman had to wait for the perfect moment when the light hit Holtby to capture the shot.

Other challenges include more lighting issues and finding the right shutter speeds. Lighting differs from indoors and outdoors, and the shutter speed needs to be fast to capture the best shots in different lighting.

While photographing sports comes with some difficulties, sports photographers said they have found that the better they know the sport, the easier and more fun it is to shoot. Professional photographer Mike Lewis specializes in shooting water sports, including underwater shots of swimmers and shots of racing. He loves his work because he gets to shoot a sport he loves, he said.

“I grew up swimming competitively, and I still swim. It’s just a big part of who I am,” Lewis said. “These two worlds, the way they’ve intersected and overlapped in my life—I’m super fortunate. It’s just a matter of two of my strongest passions in life coming together and giving me an opportunity.”

Lewis once photographed Australian Olympic swimmer Kyle Chalmers in the Mediterranean Sea for Adidas. The crew set up lights underwater in the ocean rocks, and Lewis held his breath while a French diver pulled him under the surface to get the shot.

“I’d say ‘go’ and then he would grab me by the waist. He would hold me down on the bottom and I’m not in scuba gear,” Lewis said. “The swimmer would come over the top of me and as soon as the swimmer passed, he would just throw me up to the top of the surface to get my breath.”

While the Mediterranean Sea experience was thrilling, Lewis has also worked with Michael Phelps, the most decorated Olympian of all time.

“That’s been exciting,” he said. “There was one time where I was lying on the bottom and we were doing dive shots. It felt like it was a jet airplane just rushing right over the top of me.”

Sports photography connects photographers to the events and subjects that they shoot. For Hirsh, photographing Whitman sports teams allowed him to be more involved with his daughters’ athletic careers, and he loves giving athletes and parents a way to permanently remember high school sports.

Diver Liam Gilbert-Lawrence appreciates the work Hirsh does for the swim and dive team and enjoys looking through the photos after a meet, he said.

“There’s a part of me that knows that in years coming, I’ll look back on these,” he said. “Another part is that it’s just a really cool picture, and I like seeing it. I might post it somewhere or show it to family members when people ask about diving.”

Each photographer said they’re always learning new techniques for different sports. It’s also impossible to know what will happen in a game, meet or match, making it more exciting.

Still, sports photographers need to be willing to learn from trial and error, Edelman said.

“I think what makes people successful is the persistence of trying and failing over and over again,” Edelman said. “It’s like any other art.”