The Black and White • May 30, 2019 • https://theblackandwhite.net/64499/feature/wildstrom-to-retire-after-50-years-of-enthusiasm-and-passion/

Wildstrom to retire after 50 years of ‘enthusiasm and passion’ 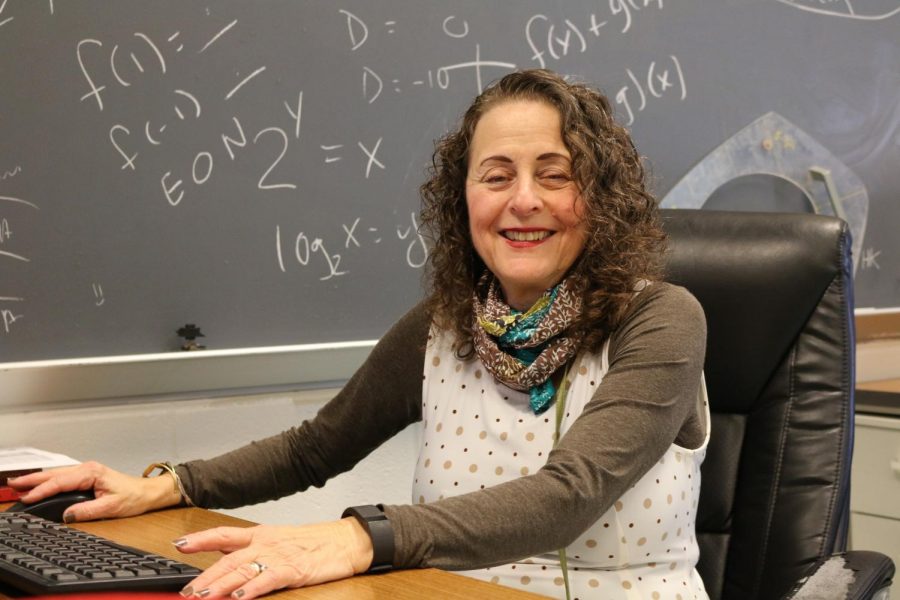 Math teacher Susan Wildstrom is retiring after 50 years of teaching. Throughout her career, she has left a lasting impression on her students, even inspiring some to pursue math-related careers.

Math teacher Susan Wildstrom may be small in stature, but in her 50 years teaching, she has made up for it in spunk. Wearing green, dangly earrings, a polka-dotted sweater and socks covered with pictures of cats, she’s quick to mention that she also owns socks with giraffes, cookies and milk, and constellations.

“It’s called joyofsocks.com, and they have fabulous socks, reasonably priced, free shipping,” she said. “Write this down.”

Wildstrom, who has taught math for 50 years—38 at Whitman—is retiring after this school year. Her eccentricity has become a staple of the Whitman math department, and her stubbornness has caused the occasional rift with MCPS authority figures. Wildstrom has integrated herself into the wider math community as well; through her participation in American Mathematical Association conventions, she’s become friends with many math professors and PhDs.

Wildstrom designed Whitman’s Multivariable Calculus class in 1998 and has piloted various other classes throughout the years. For the past 50 years, Wildstrom has worked to change students’ perception of math from a required subject into an inspiring and exciting journey.

“She’s the best math teacher I’ve ever had,” junior Emma Salafsky said. “Her passion for the subject is infectious. You want to love it, too.”

Wildstrom allows her students to learn that there’s more to math than textbook problems and formulas. For example, through her reading assignment, she teaches students that math exists in many forms—not just what they learn in the classroom. Students choose a book from the math library in her classroom, which holds around 300 books, and write a paragraph about what they read.

“I credit Mrs. Wildstrom for turning me into a mathematician, and in large part for my becoming a researcher,” said Scott Kominers (‘05), now a business professor at Harvard. “She taught me that math was something I could help create.”

Wildstrom’s love for math began early, when she was growing up in Cleveland, Ohio. Her family immigrated there before she was born, after her father escaped Dachau, the first Nazi concentration camp in Germany. Since it was still early in the war, and because he had a sponsor who would allow him to come to the United States, he was able to escape after six months. Wildstrom’s grandmother taught her to read, so she started kindergarten ahead and soon became interested in math.

At her own high school, Wildstrom was president of the math club, editor of the yearbook and a member of chorus. Her school had 3,000 students, and the students who took AP and honors classes were also football captains, newspaper editors and club presidents. When asked if she was part of this “ruling clique of intellectuals,” as she put it, Wildstrom laughed.

“Ooooh, yeah,” she said. “I was an important kid in high school. Everyone liked me.”

Because many of the students at Wildstrom’s school didn’t have the financial resources to afford college, most of her grade either went to community college or didn’t go to college at all. Wildstrom, however, went to the University of Michigan, where she met her husband, Steve. They married right after graduation. He passed away in 2015.

“My husband was a Renaissance man,” she said. “He knew a little bit about so many things. He loved math, but he was a journalist. He wrote economic analysis for a while; he was an editor, and then he wrote a column about technology. His inner math geek got to come back out.”

“They dragged me kicking and screaming,” she said.

Right out of college, Wildstrom started teaching at a high school in Southside, Michigan and then at schools across Montgomery County, including Seneca Valley, Churchill and Tilden. She started at Whitman in 1981.

Most recently, she taught Rapid-Learner Pre-Calculus—an accelerated form of honors Pre-Calculus—and Multivariable Calculus; she wrote the curriculums for both classes, and she’s taught just about every other math class throughout her career.

As she continued to teach, Wildstrom discovered what was important to her and what wasn’t. She doesn’t hold grudges against students (“it just is purposeless”) and she doesn’t make rules she isn’t prepared to enforce (“you lose credibility”). She encourages students to think beyond her lessons and gives out bookmarks as prizes to students who “advance the discussion.”

“Sometimes somebody will make a remark, and it’ll be dead wrong,” Wildstrom said. “But we’ll stop. We do some exploring.”

At Seneca Valley High School, Wildstrom taught Algebra One Part One, a class for students who struggle with math. She was skeptical at first, but it ended up becoming one her of most rewarding and formative teaching experiences, she said. Even though she now teaches some of the most advanced math classes in the school, her philosophies about math have stayed the same: she thinks math shouldn’t be a race against time and she emphasizes that there’s more to math than what’s taught in the classroom.

“The kids thought I was a god. They were wrong—I’m a good teacher, there’s no question about that,” Wildstrom said. “They thought I was a god because ‘Mrs. Wildstrom made me understand math.’ What they didn’t put together was that we were going slowly. We could spend two days, maybe three days, on a topic. We could wait until they got it.”

And Wildstrom loves when her students get it. To her, it’s the best part of teaching.

Wildstrom encourages her students to reflect on their experiences in class or anything pertaining to math through email journals, and she tries to respond to every email. When Olivia Pomerenk (‘16) was taking RL at Whitman, she emailed Wildstrom about Pythagorean Triples, a topic she was particularly interested in concerning the side lengths of triangles. Wildstrom’s positive feedback and genuine interest in Pomerenk’s studies after that inspired her to become a math major at the California Institute of Technology.

“She’s one of the first genuinely brilliant women in math I encountered,” Pomerenk said. “Most of my previous teachers had been male, so I could actually envision myself pursuing math more concretely than before. She knew I would end up in math even before I did.”

Pomerenk and many other students, still in the habit of emailing her, have stayed in touch with Wildstrom through college and beyond.

“We email back and forth throughout the year, and try to catch up over coffee once or twice annually,” Pomerenk said. “I would count her as more of a friend and colleague than just a past teacher.”

Throughout all of her years of teaching, her favorite class to teach has been RL. The RL students are mostly underclassmen, and Wildstrom likes them because they’re curious about the concepts, not just about their grades.

Linear Algebra teacher Elizabeth Doschek took Wildstrom’s Multivariable class when she was in high school. Years later, Doschek began substitute teaching for Wildstrom’s classes. Wildstrom supported her the whole way, and even recommended her to teach the Linear Algebra class she teaches now. She transitioned from Doschek’s teacher, to her mentor, to her colleague and friend.

“She’s so eager to help people,” Doschek said. “That’s her. That’s how she is. I think that passion she conveys to her students is what they remember decades after.”

Twenty years ago, MCPS mandated that all math teachers take a multi-day training class over the summer to teach Algebra One. Wildstrom had already been teaching for over 30 years and didn’t feel the need to participate. So she skipped the training.

“Because I’m snotty and snide and insubordinate,” she said.

“So I’m not permitted to teach Algebra One, Algebra Two, or Geometry,” Wildstrom said happily. “Although, by now, they’ve forgotten.”

“She’s a really big deal within the mathematics community,” said Katie Kinnaird (‘04), who teaches computer, statistical and data sciences at Smith College. “It’s a bit like being around a rock star.”

A token of Wildstrom’s classroom is her “Michigan Lady.” The life-sized doll used to belong to math teachers Stephen Hayes and Meg Thatcher, but one summer, it appeared in Wildstrom’s room with its hands positioned in an obscene gesture. Wildstrom stuck it behind the copy machine.

Years later, sifting through her late husband’s belongings, she found one of his Michigan sweatshirts. She put it on the Michigan Lady and dragged the doll to the corner of her classroom, and it’s remained there ever since. But she’s not going to take the doll with her at the end of the year. Instead, it’ll stay at Whitman, where some other teacher can place a new sweatshirt on it’s chest and put it in the corner of their classroom.

Fifty years is a long time, and Wildstrom is ready to spend time with her grandchildren in retirement.

“I think it’s nice if I walk out of the building while people still think I’m not senile, and I can still stand up,” she said. “You know. Leave ‘em laughing.”