The Black and White • May 29, 2019 • https://theblackandwhite.net/64452/feature/esol-program-fosters-community-friendships/ 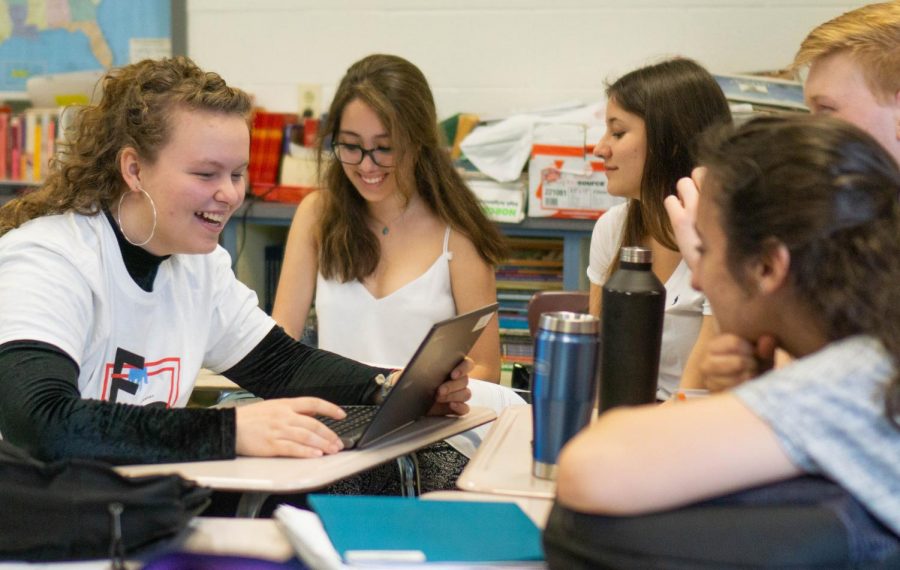 Come fifth and sixth period, when most classrooms empty for lunch periods, the ESOL rooms are filled with commotion. In one corner of A334, students are working away at assignments, while another group sits by the teacher’s desk, chatting with teacher Charles Wang. Students file in and out, some eating their lunches and talking with friends about their favorite Japanese-pop bands, some just coming by to greet friends.

Almost all of the 20 or so students sitting in Wang’s classroom are in the ESOL program. ESOL, which serves as the students first interaction with the American school system, is currently composed of around 50 students, 13 core classes and a range of shelter and bridge classes.

But due to a decreased staffing allocation and the creation of a new ESOL program at Churchill, Whitman’s program is shrinking dramatically—from 13 classes to four. The program is losing two full-time teachers next year, leaving only one part-time teacher to teach for the remaining four classes. ESOL students who live in the Churchill cluster currently attend Whitman, will be joining the new program there next year.

With a loss of both teachers and students, resource teacher Sonja Maroni sees Whitman’s program shrinking substantially next year. That loss will be felt by students making up the richly diverse Whitman international community as well as the entire community.

Although many international students eventually find their place at Whitman, coming in is incredibly intimidating, junior Anna Bedratenko said. When she came to Whitman from Ukraine her freshman year, her English was limited to the phrase “good morning,” she said.

“When I moved, I spoke terrible English; I could only say a few words, all with a terrible Ukrainian accent,” she said. “The language was new, the community was new, everything was new. I barely understood how everything worked.”

To help students like Bedratenko acclimate. Maroni started the Whitman International Club twenty years ago when she came to Whitman. Today, the club represents over 60 countries with 200 members.

She began the tradition of International Night—the clubs biggest event of the year—the following year.

The club gives students coming in “a place” right off the bat, resource Sonja Maroni said.

“I wanted our students to fully participate in the Whitman experience, and it’s hard to do that sometimes as individuals, especially as individuals who feel different from everybody else,” she said. “When you get to be a part of a group right away, it not only enables you to feel proud of who you are, but you also get to meet a lot of other people in your situation.”

Maroni, who grew up in a household that spoke three languages—English, German and Polish—has always been comfortable in multicultural environments, she said.

Right away, students feel that sense of community.

“It’s a neutral place because everyone’s from a different place, but we all share similar experiences. You see people that had the same experience,” senior Josefina Pedreros said. “So you’re not alone. It feels a little bit like home.”

The club is busy all year long, hosting a welcome picnic at the beginning of the year, culture lunches, an end of the year soccer tournament, and of course, every February, International Night.

The club’s student leadership organizes International Night completely independently, assigning performances, food stands and MC roles. Students rehearse outside of school, choreographing their acts, staying after school every afternoon for two weeks before opening night. Beyond performing acts from their culture for the entire school, spending so much time together helps foster a “spirit of union,” Machado said.

Soccer is another way through which the club comes together. At almost every event, students will start playing soccer because it’s a sport everyone knows. At the picnic, the tournament and a lot of the outside school events, the entire club will play together, Pedreros said.

Students don’t just bond through events, though. Often, they’ll go to a homecoming dinner together each fall, and other than that, just spend time together outside of school, not as ‘club mates’ or because they feel they have to, but because they are all friends, Machado said.

Those same experiences and sense of unity translate into language practice too. Although Whitman offers five levels of ESOL, shelter classes and bridge classes, many students attribute the development of their English skills to interacting with friends and classmates.

“There are so many people from different countries and it’s our second language, so we feel comfortable talking to each other,” ESOL 3 freshman Gael Garma said. “We can only speak to each other in English so we practice our English with each other.”

In turn, that practice helps students perform better in class.

Once students finish ESOL 5, they “graduate” the class and take on-level or honors English. They can also take bridge classes, which combine English 9 and ESOL 5. And International Club gives them a safety net after they exit ESOL.

Being a part of such a diverse group of people expands their view of the world, Betratenko said.

“When I lived in Ukraine, it was a pretty homogeneous society. Here, because of the club, I have met so many people from all over the world,” she said. “Those perspectives are the best thing the club has given me.”

That translates to increased political awareness too.

“I think the club has made me more tolerant. Like, when it comes to cultural and racial issues for example.” Pedreros said. “These past few years, with Trump and the Wall, I’ve definitely paid more attention to it because of the club.”

The bonds that the students form is what sets the club and community apart; at the end of the day, the club is a “family,” senior Akaash Palaparthy said.

“It’s comforting to know that there are others like you who are new to the American life and are willing to take baby steps to be a part of it,” Palaparthy said.