Bored over the summer? Here are some books! 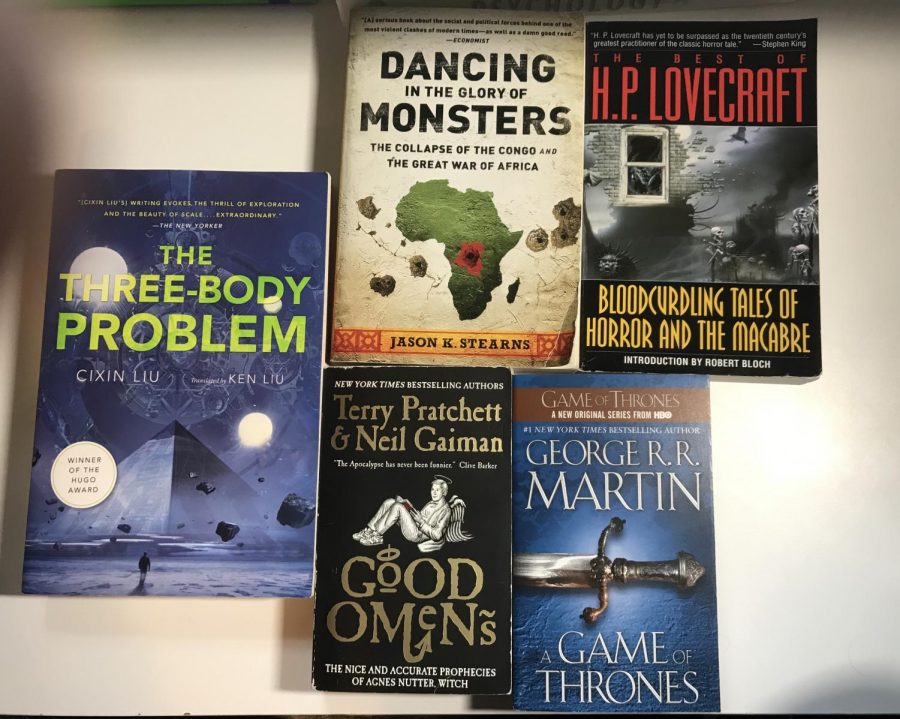 If you like sci-fi and fantasy, here are five great book suggestions to get those pages turning.

We all experience extreme boredom over summer break, usually around the time when we start to forget which day of the week it is in mid-July. Luckily, there’s a simple solution: reading. No, not for a school assignment—for fun. If you like sci-fi and fantasy, here are five great book suggestions to get those pages turning.

The first critically acclaimed science fiction novel written by a Chinese author, “The Three-Body Problem” is one of the most original books of this decade. The story is about a gradual first contact between humanity and alien life. It starts from a secret Chinese military base at the height of the Cultural Revolution and ends in the present day. The novel is a must read for science fiction fans. For me, it was a book that instilled a sense of wonder; most of the book’s themes and story is entirely new to the genre. While most sci-fi novels fall victim to making their aliens simply humans with makeup on, the civilization that Liu creates is creative and original.

Like the rest of the country, you’re probably sad that the wildly popular TV series “Game of Thrones” is coming to an end, and you aren’t quite sure where you’re going to get your dark fantasy fix. What you may not have known is that the series is actually adapted from Martin’s epic series “A Song of Ice and Fire.” This series will take the entire summer to read, at least. It consists of 5 books: 4,228 pages, 1,736,054 words and it would take 198 hours and 53 minutes to listen to the audiobook. Reading it is a commitment, but one well worth it. “Game of Thrones” removed or merged so many characters and plot lines that the books don’t actually feel like a novelization of the show. Instead, they’re a deeper dive into the politics and intrigue that make the show so great. The books’ complex plots and webs of interesting and multi-dimensional characters make it quite possibly the best fantasy series of all time. A warning: this series will probably never be finished—Martin is 70-years-old and procrastinating ending the books like they’re an English paper.

“The Best of H. P. Lovecraft: Bloodcurdling Tales of Horror and the Macabre” by H.P. Lovecraft (2016)

This is a collection of short stories by one of the greatest horror writers of all time. Unlike other authors, Lovecraft doesn’t rely on jumpscares or vivid imagery to build terror. Instead he uses the fear of the unknown—the type of monster that seeing would, in his own words, make us “go mad from the revelation” of their existence. Take the titular monster from the story, “The Call of Cthulhu”: a sleeping god whose awakening would destroy the world in a instant and who drove a fisherman insane just because the poor man saw it. Reading these stories inspires a feeling of almost-helplessness—a fear of what’s beyond. Those who don’t enjoy feelings of existential dread, turn around. Those who are okay with it, get ready for some good reading.

“Good Omens” is a collaboration by two of the best humorous fantasy writers of the modern day. It’s a story about an angel and demon teaming up to stop the apocalypse and is somehow more absurd than the plot summary suggests. A misplaced antichrist and biker gang of the apocalypse are the center point of the novel. A great blend of excitement and comedy, the novel is perfect for anyone that wants to read without thinking too hard. Reading it was like watching a comfort TV show like “Friends” or “The Office”; it’s a soothing book.

“Dancing in the Glory of Monsters: The Collapse of the Congo and the Great War of Africa” by Jason Stearns (2011)

This is the only non-fiction book to make my list. It’s a history of the wars that embroiled the Democratic Republic of the Congo since 1996 in the deadliest conflict since World War II. The conflict left one of the largest countries on the continent a failed state. The book is methodical and easily accessible to someone unfamiliar with the topic. This book won’t make the reader feel very happy at the end, but it will inform them about the recent struggles of a region that rarely makes the news or history books. It’s a must read for any high schooler to help them better understand one of the greatest tragedies of our time.