The Black and White • May 9, 2019 • https://theblackandwhite.net/64095/feature/pushed-out-an-in-depth-look-at-gentrification-in-montgomery-county/

Pushed out: An in-depth look at gentrification in Montgomery County 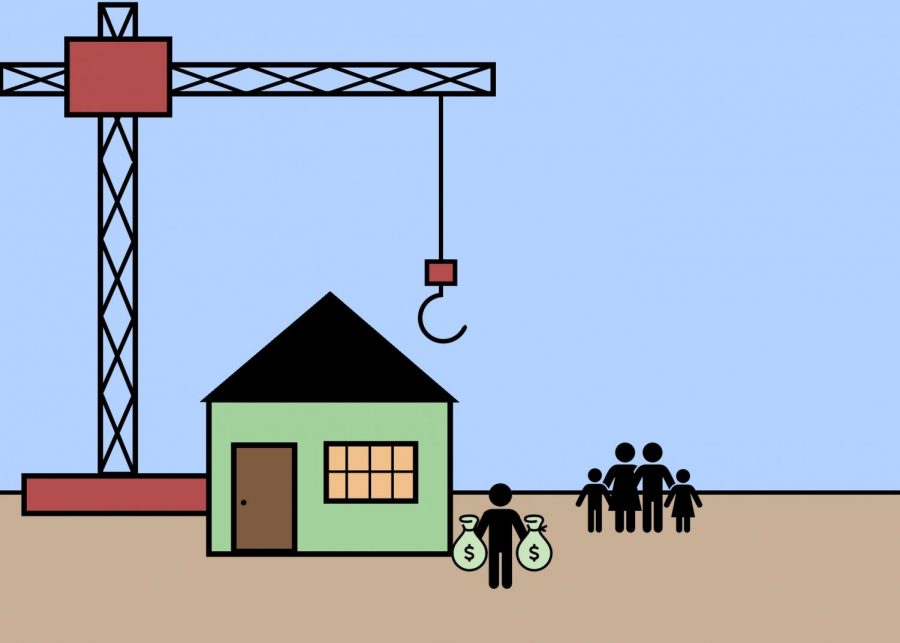 Gentrification affects our local community. A 2016 study found that Silver Spring, MD, had the second highest rate of rising housing prices forcing out low-income residents in the nation.

Ms. Ashraf has been living in the same Rockville home for 20 years. In this time, she’s seen Montgomery County change dramatically, from a suburban county of 850,000 inhabitants to the sprawling economic powerhouse of 1.2 million today.

But as the county’s population skyrocketed, so has her cost of living. High taxes, expensive groceries and costly services have added enormous pressure to this retired homeowner’s budget. Barely able to make ends meet, Ashraf has lost her sense of security.
What is gentrification?
Ashraf’s situation is symbolic of the broader issue of gentrification, when a neighborhood’s economic development results in the displacement of incumbent residents of one social class and culture by another, more affluent class. It’s commonly linked with a revitalization of the neighborhood and a subsequent increase in property values.

Gentrification is an international phenomenon, but it’s one that has had a major impact on our community. A 2019 study of gentrification in 935 cities from 2000 to 2010 concluded that Washington D.C. had the highest percentage of gentrifying neighborhoods. Though not every area of this county suffers from gentrification—Bethesda is not strongly impacted by gentrification, since it’s almost always had high-income residents— a 2016 study found that Silver Spring, MD, had the second highest rate of rising housing prices forcing out low-income residents in the nation.

Though this process can occur naturally through fluctuations in supply and demand, local government plays a substantial role. The county Planning Commission, whose sector plans decides which types of property will be built on county land, directly influences the levels of income necessary to live in certain areas. For example, the Commission knows that single residency homes are more expensive than apartments; by zoning for single residency homes to be built in an area, the planning commission makes that area much less accessible for lower-income people.

“Montgomery County is a heavily economically and socially engineered jurisdiction,” said David Rotenstein, a historian for the National Council on Public History. “The county has, throughout much of its history, attempted to reshape places in ways that increase their value and make them more attractive, so that wealthier, oftentimes whiter residents can move in and make themselves at home.”

Why would the County adopt policies that purposefully segregate communities? To Rotenstein, it’s about crafting a county that attracts rich people and generates additional tax revenue.

“Montgomery County, like other jurisdictions in the United States, uses redevelopment and economic development as tools to create better places that increase tax values and make people feel like they’re moving into a place that’s specifically tailored for them,” Rotenstein said.
Can gentrification be good?
Though gentrification often gets a bad rap, experts are split on whether or not gentrification has anything to offer. Jason Richardson, director of the National Community Reinvestment Coalition, said that in limited cases, gentrification can bring much needed economic development without destroying a region’s character.

“If you go to downtown Silver Spring and walk through those areas, you’ll find it’s still a very diverse and inclusive place,” Richardson said. “In some cases, if gentrification is purposefully done, it can bring higher income individuals in an area and also make it a more inclusive place.”

A Wheaton resident of 18 years believes that though his community has been gentrified, it’s for the better.

“There’s more shopping, more people out at night, and it’s cleaner,” he says. “For the first time, money is coming in. Maybe gentrification isn’t always a bad thing.”

But Rotenstein disagrees. He said that gentrification, without exception, is a negative development.

“You can accomplish things like redevelopment and bringing new money, new businesses, new homes in our community, without displacing people,” Rotenstein said.
The future of gentrification in Montgomery County
Looking forward, community leaders expect that the Purple Line is sure to bring new challenges. This new metro line, which will connect Bethesda to Prince George’s County, is poised to increase property prices along its path. That will likely increase property taxes, rents, cost of living and, thus, displacement.

In response to this looming issue, then-candidate Marc Elrich—now the county executive—spoke out against gentrification.

“If we don’t do rent stabilization at the Purple Line stops, for example, the neighborhoods around the Purple Line will not continue to exist,” Elrich said in a November 2017 debate with the other county executive candidates. “I accused the Planning Board of ethnic cleansing.”

Neither Montgomery County or Prince George’s County passed legal protections against the negative effects of gentrification. Instead, both engaged in informal handshake agreements to try and prevent displacement.

It’s not just large, new projects that threaten to gentrify communities. Old-fashioned developments, where older, typically more affordable housing is torn down to construct new, typically more expensive homes, is also a main driver for gentrification. The sector plans, which determine what’s built where, are a major indicator of where gentrification will take place.

“Places to keep an eye out for are the sector plans being reviewed and approved by the Planning Board and the county council,” Rotenstein said. “As these sector plans come online, you’re going to see demographic changes and gentrification in those places.”
Community members organize against gentrification
Ashraf has gotten involved in community activism, but she’s had little to show for it. She feels ignored and silenced. Though many agree that gentrification is worth fighting against, few are sure of how to go about it.

Some activists have found ways to resist gentrification. In D.C., the local branch of the Democratic Socialists of America organized a “Stomp Out Slumlords” campaign in support of anti-eviction, rent-control measures. The group sees its campaign as a way of preventing gentrification, Dylan Sheldon, the Montgomery County representative for the campaign, said.

Del. Gabriel Acevero of the mid-county Maryland House of Delegates District 39 represents a very diverse community where gentrification is leaving a mark. For him, the best way to combat gentrification is social housing and rent control.

“If we aren’t creating new affordable housing units to meet the demand, then we’re putting people in a precarious position economically, financially and living-wise.”

One possible model of rent control can be found in Takoma Park. The city of 18,000 residents is unique in Maryland for its rent stabilized apartments that limit how much rent can be raised in a single year. Thanks to those programs, rent in Takoma Park is $400 a month cheaper than in the rest of the county, and Takoma is home to a higher proportion of low and moderate income families than the rest of the county—34 percent of households are low income, compared to 19 percent for the County.

But Acevero’s background as a union organizer has taught him that change cannot come just from politicians—or journalists, for that matter.

“Those closest to pain are closest to the solution and should be closest to power,” he said. “Our job is to include them in the conversation, listen to their solutions and ensure that they have the power to act out on those solutions.”