The Black and White • May 6, 2019 • https://theblackandwhite.net/64033/news/pyle-addition-set-to-include-several-classrooms-auxiliary-gym/ 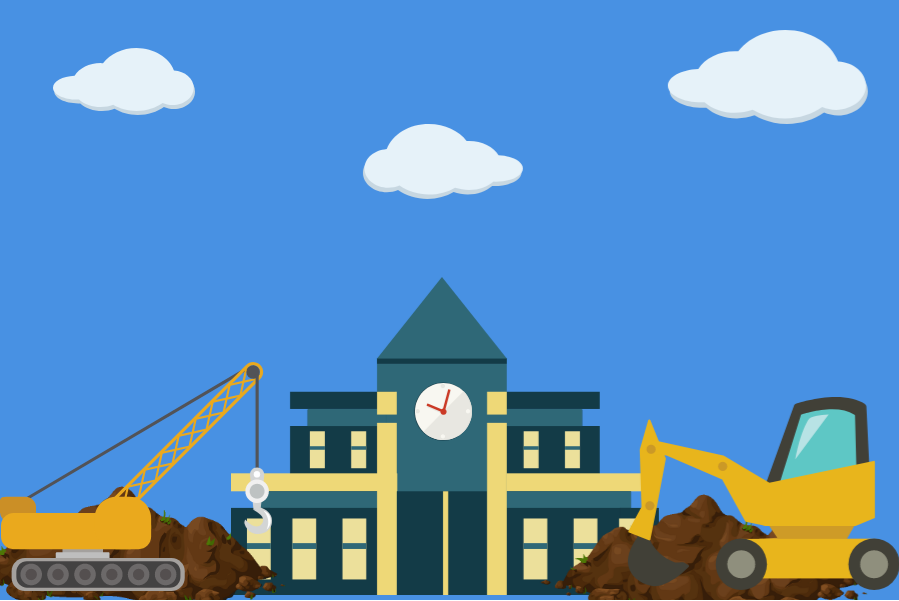 Delmar Architects are set to complete the $25.1 million addition to Pyle Middle School by September 2020. The addition is currently in the construction phase.

The new addition is set to include seven standard classrooms, a second gymnasium, two auxiliary gyms, a health classroom, a fitness room, an instrumental music room and a general choral music room.

When the architects planned the addition in 2017, they only included an auxiliary gym in the construction plan, but the county conducted a survey that found that enrollment was set to exceed the student capacity of the building. This year, the school has an enrollment of 1,540 students, and the core capacity of the building is 1289. To compensate, Pyle uses each classroom almost every period and has added three portables.

“Just about every year, we have had an increase in student enrollment,” principal Chris Nardi said. “That’s what has triggered the need for an addition.”

The addition will make space in the back of the school behind the locker rooms, on top of where the basketball courts were previously located. In order to maximize the space and minimize the building footprint, the addition will have three stories.

“We didn’t have any other room on the site to enlarge the cafeteria, so it’s probably going to be the first of its kind in Montgomery County,” head architect David Delmar said.

Because the school is being occupied while construction takes place, the construction schedule is longer than it would be otherwise. Having active construction on the building has placed the biggest burden on the physical education department, which can no longer use of the upper field and basketball courts.

“We’ve always been overcrowded, so we’ve been used to it,” P.E. teacher Thomas Caswell said. “We just make more teams, with more teams sitting out, leading to less activity for the kids.”

The new addition will provide more classroom space and will create better circulation within the school, so hallways are less crowded. Starting in August or September, students and staff will gain access to the first floor of the addition, where a 3,200 square foot gym space will be available for use. In December, the school will also gain access to the second and third floors.

“It’ll be a beautiful addition that will give us additional space which will be great,” Nardi said. “We’ll be able to run programs that we haven’t been able to run before in spaces that are appropriate, and our band and orchestra rooms will fit all of our kids to address our robust music program.”