The Black and White • May 9, 2019 • https://theblackandwhite.net/64021/sports/from-skater-to-coach-junior-samantha-leventis-transition/ 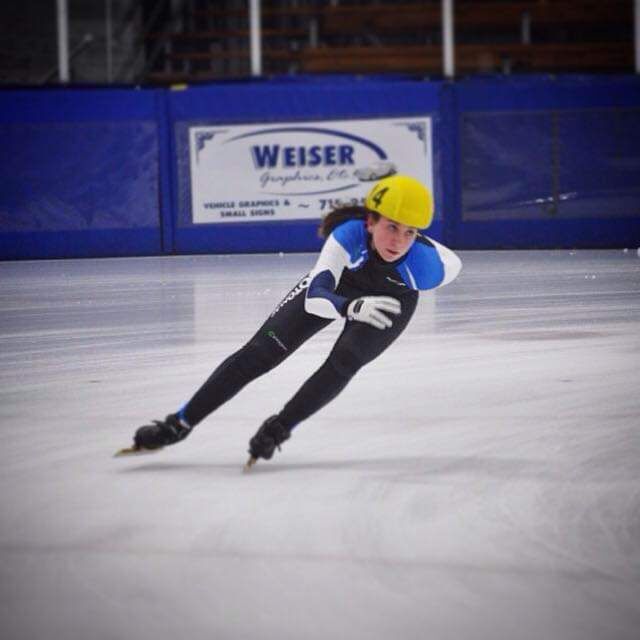 When junior Samantha Leventis stumbled across speed skating near the beginning of middle school, she had no idea that it would soon take over her life. By freshman year, Leventis was practicing seven days a week for four hours a day to prepare for upcoming competitions. She no longer had any time to pursue other interests, which prompted her to take a step back from skating last year. After spending a few months away from the sport, Leventis decided to make her return to the rink. But, she’s not a skater anymore—she’s a coach.

The Black & White previously covered Leventis’ rapid ascendancy as a skater; within just years of picking up the sport, she was competing against the top skaters in the country. But sophomore year, the rigorous schedule that came with competing at the top level started to take a toll on her.

“With skating, it’s really hard to be half-in; you have to be all in or nothing,” Leventis said. “I stopped skating, but I still wanted to remain part of the community, so I started coaching.”

Leventis coaches for her old organization: Potomac Speed Skating. She assists with the beginner group consisting of skaters ranging from ages five to 12. Coaching provides more flexibility for Leventis because she can choose when and how often she goes to practice, which is usually around once or twice a week.

At a typical practice, Leventis has a variety of responsibilities, varying from adjusting skaters’ technique to running drills to just helping the kids put on their skates. After she reviews what the kids need to work on during practice, she skates alongside them as they do a couple of laps, offering words of encouragement and advice as they go.

“I love coaching because, although I’ve only been doing it for a short amount of time, I’ve become so invested in how well they do, and I really care about each kid,” Leventis said.

Leventis’ patience is part of what makes her such a special coach, her own former coach Simon Cho said. She’s willing to put in the time to help the younger kids, who are just starting out on the ice, learn how to skate well.

“As a teammate, she was extremely supportive, and I feel like that quality of her as an athlete really spills over into her being a coach,” Cho said. “The whole aspect of her being patient is rooted from her support.”

With her schedule now open, Leventis has picked up some new hobbies. She now plays piano, joined a soccer team and is involved in the Whitman community. She works on tech for drama productions and is one of the leaders of the club Inspirators— which aims to positively impact the community through educational means. Leventis even started her own club, Borders to Bridges, which aims is to break down cultural barriers and learn about life in another country by contacting schools around the world and setting up video calls.

“I miss competing a lot. I miss going fast, I miss seeing my friends,” Leventis said. “I miss skating, but then I look at all the other things I’m doing in my life right now and I’m like, ‘Ok, it’s worth it.’”