The Black and White • May 3, 2019 • https://theblackandwhite.net/64007/feature/lecture-circuit-gives-students-a-platform-to-speak-out/

Lecture circuit gives students a platform to speak out 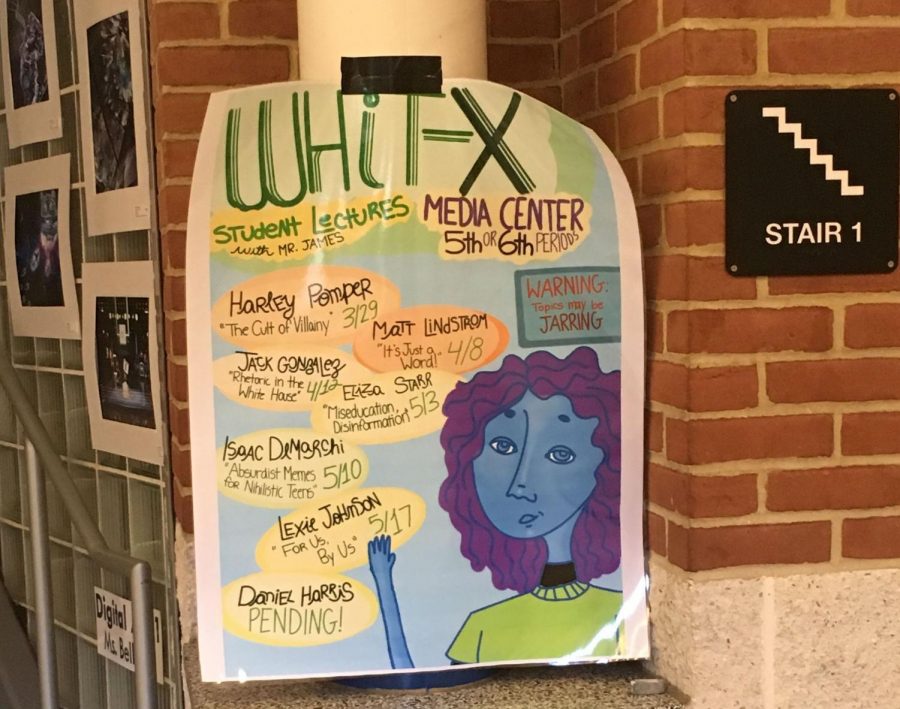 The Whit-X Lecture series gives students a platform to share their opinions. Students research and create a 45 minute presentation on a topic of their choice.

A short walk from the commotion of the cafeteria—hidden from students sitting cross-legged on the crumb-laden hallway floor, concealed from freshman snacking on carrot sticks and crunching extra-cheddar goldfish crackers—senior Daniel Harris approaches a microphoned podium in the media center. Thirty or so students sit in haphazard rows of chairs, quiet, as Harris addresses the title plastered on the Promethean Board to his right: “Existentialism and Leftism.”

Through the 45-minute lunch period April 6, Harris took his audience through the fundamental philosophy of existentialism and described how it directly correlated with extreme liberal ideals. His presentation was one of a series of student “Whit-X” lectures, which have been occurring throughout April and will continue into May. The lectures, which English teacher Omari James organized, give students a platform to discuss something—anything—they want, provided the material isn’t hateful or offensive.

In James’ Media and Society elective last semester, students would often find themselves developing a desire to teach a lesson, something James encourages. But because of time constraints, not all students had the opportunity to present. Senior Ethan Kim, who moved at the end of the semester, was given the opportunity to present his topic “Mortality and Music” as part of the series before he left. His presentation took place in the media center and was open to the entire student body.

“It ended up having 50 or 60 kids come out,” James said. “It was such a passion project for him that, on the spot, I was like ‘I’m going to turn this into a lecture series.’”

Senior Daniel Harris has taken both of James’ electives. When he heard about the lecture series, he began considering leftist philosophers he had read about from debate. Harris put together a lecture about how leftism and existentialism are compatible. He elucidated the injustices we see in society that, according to him, occur because of capitalism.

“The message that I really wanted to hammer in was that, regardless of where you stand on the political ideology that I put forward, it’s not acceptable to simply sit back and not take action,” Harris said. “I wanted to make it very clear that whenever you see a problem and refuse to act upon it, you are benefiting from the privilege of not being directly affected.”

James knew junior Eliza Starr, one of his AP Lang students, is considering going into education—so he asked her if she wanted to give a lecture to get a feel for teaching. Starr had written a Lang essay about education earlier this year, and said she was shocked by the racial disparities in education that she read about. This research became her lecture topic.

“I’m not used to putting myself out there, but I think it’s been good,” Starr said. “I’ve been able to be out of my comfort zone. I hope people can learn something.”

Other students took just as strong a stand. Junior Harley Pomper spoke of the dangers of categorizing people into archetypal roles. Senior Lexi Johnson reflected on her high school experience, analyzing the moments that have shaped her personality. Senior Matthew Lindstrom explained the value of names. And the student audience listened intently to each and every one.

“I’m realizing how passionate some of the people at Whitman are,” junior Ananyaa Malhotra, who has been to every lecture, said. “We don’t see that very often because we’re so focused on academics, but when you let people talk about something they’re genuinely interested in, they’re so passionate.”