The Black and White • May 3, 2019 • https://theblackandwhite.net/63933/feature/junior-spreads-mental-health-awareness-creates-short-film/ 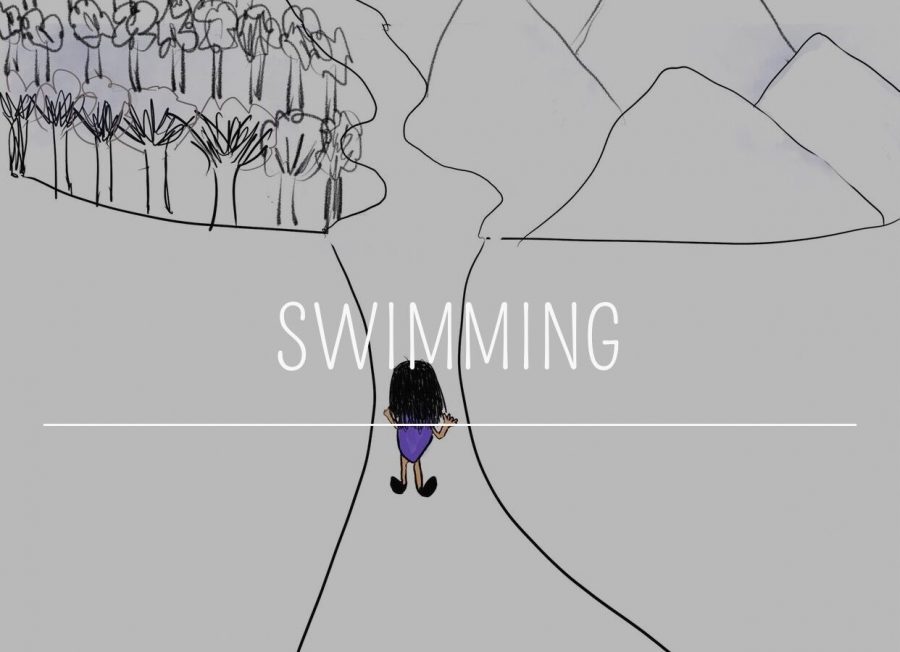 Junior Amelia Montagnino recently created a suicide awareness video titled "Swimming." It aims to help students recognize friends and family who may be suffering from mental illness and initiate conversations about mental health.

Content warning: This story contains language that pertains to suicide.

The summer after ninth grade, junior Amelia Montagnino’s summer health teacher started the mental health lesson by asking anyone who had a connection to the topic of suicide to stand up. At the time, Amelia didn’t know anyone who had suffered from suicidal ideation and didn’t have a personal connection herself; but all around her, people began to stand.

Surrounded by people on their feet, Amelia realized the seriousness of mental health issues within her community. And although she didn’t know it at the time, if she had to do the same exercise today, she’d be one of the first people standing, she said.

Two years later, after spending more than 250 hours making a ten-minute suicide awareness video titled “Swimming,” Amelia hopes other students will begin to recognize when people around them are suffering and understand how they can help too. As of now, she plans to air the film during an extended third period class in May, accompanied by a trigger warning beforehand and a follow-up writing activity.

“There can be things in life that you don’t really realize are real, and you don’t understand how much they impact people; but then just wait a few years and that could be the most impactful thing in your life,” Amelia said. “Understanding those things and having a more open mind about what people might be going through was a big hope of mine for the video.”

Last year, when sophomore Jojo Greenberg died by suicide, Amelia was heartbroken. The girls played on the JV volleyball team together, and after the death of Greenberg—whom Amelia compared to “the sun”—Amelia said she felt powerless in helping herself and the people around her through their grief.

This “pent-up emotion” only grew more intense that winter, when she spent a lot of time with her cousin, who was suffering from depression and suicidal ideation. Amelia would spend time with her whenever she could in the hospital, text her throughout the day to check in and worry about her constantly.

As a way to channel her emotions towards something positive and impactful, she decided that winter to create the video.

“If someone’s going to listen to you for even one second, it’s showing you that they have even that tiniest bit of hope, and you need to grasp that,” Amelia said. “So that became one of the main messages of the video: to reach out for help and reach out to help.”

Though her mother, Trish Montagnino, was worried about her taking on such a heavy and painful project, she said Amelia’s commitment was “unwavering” throughout the process. Amelia has been making videos her whole life, Trish said, and this project is another manifestation of Amelia’s ability to reach people.

“She has a way of capturing emotions to make people feel something,” Trish said. “I can think of several videos she has made that have really touched people, even just like a small appreciation video for her aunt.”

One of Amelia’s primary goals was to depict the topic of suicide realistically. Adult-made suicide awareness programs, like the county’s “Signs of Suicide” video, fail to get through to students because they sound staged, she said, so the conversations that many students end up having about mental health are in a joking manner. Instead, Amelia focused on highlighting teenage voices and raw experiences that other students could empathize with.

“There’s such a contradiction around suicide because we joke about it so openly, but then when it comes to talking about it and being serious about it, we have such a hard time conceptualizing that it’s a real thing,” Amelia said. “I want the video to open people’s eyes to the people who are struggling, because the ways people struggle with suicide and mental health are so different.”

The video starts with a dramatic reading of junior Jordan Shaibani’s piece “Drowning,” which details Shaibani’s personal experience with mental illness. Shaibani originally wrote the piece in teacher Omari James’ ninth grade English class, but this year she has started sharing it more and performing it at slam poetry competitions.

Amelia first heard the poem freshman year, and when she decided to make the video, she reached out to her immediately. Shaibani hopes her poem will be able to reach people in ways that traditional classroom lessons can’t.

“Writing helped put me in a meditative state where I could sit just with my thoughts and say, ‘This is how I’m feeling, and this is how I’m going to translate it so other people can understand,’” Shaibani said. “Mental illness can be such an abstract concept if you’ve never felt it before, so I hope that it changes someone’s mind, or shows someone suffering that someone else is feeling the exact same way as them, or helps someone understand how a friend is feeling.”

Three other people are featured in the video: two other students from the DMV area who have suffered from depression and a local suicide hotline operator. The two girls share their stories and their paths to recovery, while the hotline operator talks about what happens when you call a hotline number.

Amelia wants these teen speakers to help students recognize when their friends are suffering. For students who are suffering themselves, she also wants to make it less daunting to reach out for help.

In-between and overlapping the different clips, she added background music, digital imagery and messages of support. She spent the entire summer filming and editing the video before she finalized the project in early August.

After viewing the video, students will write down their sources of strength and ways they can reach out to help others in the future. She hopes—if it’s a success—the video will spread throughout the county and be able to help more students.

“If I had to pick one takeaway, I would hope that after watching this video, students have an open mind about the people around them,” Amelia said. “Even if it’s not visible to your eye, understanding that suicide is a real problem, and it needs real attention, and real solutions are so important.”