The Black and White • April 27, 2019 • https://theblackandwhite.net/63910/feature/breanna-mcdonald-leads-minority-scholars-program/ 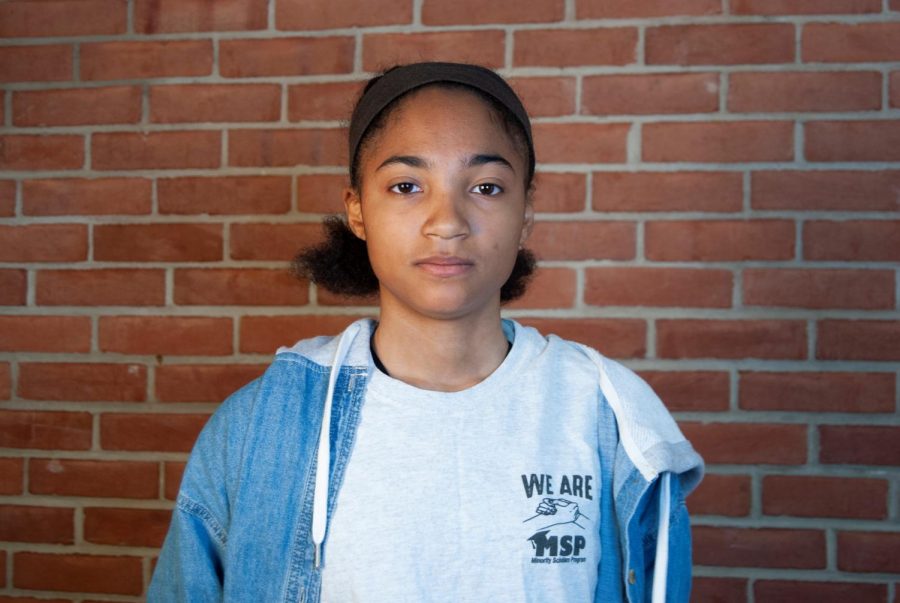 Senior Breanna McDonald started the Whitman chapter of Minority Scholars Program last year with three other students. She is currently working on a racial awareness film project with the club.

For years, senior Breanna McDonald has seen herself as an athlete, a photographer and a high-achieving student. She led the track team to States this past season, where she placed fifth in the 800-meter dash, she has been taking photos since she got her first camera in eighth grade, and she said she has always been a “knowledge-driven” person.

She never had trouble expressing these identities, but when it came to her identity as a black student, she found it difficult to speak out about her experiences. Since joining the county-wide Minority Scholars Program last year and becoming president of the Whitman chapter of MSP this year, she said she has found her voice—and even started seeing herself as a leader.

At an MSP internship this past summer, McDonald met with black, Latino and Vietnamese students from across the county to discuss race relations within MCPS. In one exercise, students sat in a “judgment-free” circle and answered questions about themselves. They started off with easy questions like “What’s your favorite color?” but the conversation quickly moved on to sharing difficult experiences and concerns about the status of minority students within the county. In this supportive and understanding environment, McDonald found a sense of community that she had struggled to find at Whitman in the past.

“I’ve never become so close to that amount of people in such a short amount of time,” McDonald said. “They believed in me, and made me feel more comfortable and safe voicing my concerns and my past difficult experiences. Having that community of safety and love was just so amazing.”

Back at Whitman, McDonald is working to open up similar conversations. As president of the club, she speaks with school administrators and teachers a couple times a month about how to discuss race in a classroom setting and holds weekly meetings with other minority students to give them a platform to share their experiences, all in an effort to close the opportunity gap and increase racial awareness.

McDonald is currently working on a racial awareness film project. In the film, minority students share their experiences with racial prejudice at school and address how the Whitman community can work to fix those issues. She’s working with administrators to air the film and hopes the movie will prompt students to engage in more conversations about race.

“I want minority students to be able to say ‘this is what I’m going through and this is what needs to happen to change it, and for me to feel safe at this school,’” McDonald said. “You can’t effectively continue to grow if you don’t listen to other people’s stories. In order for us to progress as a Whitman community, and for us to even call ourselves a community, we’re going to have to address racial issues head on.”

McDonald and three other students, Kevan Nathani, Tess Ravick and Jacob Marmol began the Whitman chapter last year, but the program lacked organization, junior Khanya Dalton said. This year, Dalton said McDonald’s passion and leadership prompted her to be a more involved member; now, the club has 15 to 20 “strong leaders.”

“The way she described her internship and the importance of MSP is really what motivated me to become more involved,” Dalton said. “I was so impressed by her. She’s such a good public speaker, and she thinks about things so critically and is so sure of herself.”

McDonald has always been kind and passionate, her mother, Jacqueline Brooks, said. Because she lived in New York City for six years —which Brooks called “a melting pot of culture”—McDonald grew up appreciating diversity.

“I always wanted her to be able to get to know people of all different backgrounds,” Brooks said. “I taught her to embrace everybody because we are more alike than we are different.”

As she got older, this mindset helped McDonald recognize the inequity around her. When she was in 7th grade, she heard about Tamir Rice, an African-American boy who was fatally shot by a police officer in Cleveland, Ohio. The officer allegedly mistook Rice’s toy gun for a pistol. Rice was 12 years old, only one year younger than McDonald was.

“I couldn’t understand why it happened, and even though I didn’t know him, I could feel his family’s pain,” McDonald said. “It could’ve been one of my cousins, it could have been my uncle, it could have been any black male in my family, or any black male friend that I had. And then seeing people justify it really put a pit in my stomach because I couldn’t understand how people could hate someone based off of something they can’t change.”

When she moved to Bethesda the summer before her freshman year, racial prejudice was less recognizable to her. But during her junior year, a teacher made an assumption about McDonald that was completely unfounded. After experiencing this preconceived bias firsthand, she started to become more aware of the discrimination within her own community.

“I’ve always been a student who has been in honors and AP classes, and I’ve enjoyed those classes,” McDonald said. “So I couldn’t understand why a teacher would see me in that light.”

Since Whitman is a majority-white school—66.8 percent of the school population is composed of white students, and less than five percent is composed of black students, according to the MCPS 2017-2018 Schools at a Glance report—she felt like most of her friends couldn’t understand her experiences. This lack of open conversations about race relations at Whitman stems from a place of privilege, McDonald said. Since most students will never be directly affected by racial prejudice, she said, they don’t think to engage in meaningful conversations about race. This makes initiating these conversations even more crucial.

Last year, then-freshman Bryan Ellis spoke at an assembly about his experience being called the N-word at Whitman. When McDonald heard students making jokes after the assembly, she knew she had to take action—for herself and for all the minority students at Whitman whose voices weren’t being heard.

“They used it as a joke instead of taking his pain and looking at it seriously,” McDonald said. “It just made me want to create a change because I don’t want to see anyone else, any minority students, go through this and have to be alone.”

Ellis no longer attends Whitman. But through participation in county-wide meetings and a February retreat, other minority students who are MSP members have been able to share and compare their experiences with students from MSP chapters around the county. At the retreat, members participated in student-led task force meetings and workshops, ranging from topics like student advocacy to knowing your legal rights.

This student-led environment has given McDonald the confidence to take initiative within her community, she said; recently, she spoke at an MCPS town hall about her experience attending a racially homogenous school. She hopes that other MSP members will be able to use the confidence they gain from the program to help spark change too.

“Students don’t always know the power they have, but it’s important for students to be able to lead this organization because this issue affects us everyday,” McDonald said. “By actively having these conversations about race and being comfortable talking about it—that’s how we make a change.”

The Minority Scholars Program meets every Wednesday after school, and members attend county-wide meetings the second week of every month. If you’re interested in getting involved, reach out to McDonald or to club facilitator Rainer Kulenkampff.