The Black and White • April 26, 2019 • https://theblackandwhite.net/63902/feature/artist-spotlight-matthew-millin/ 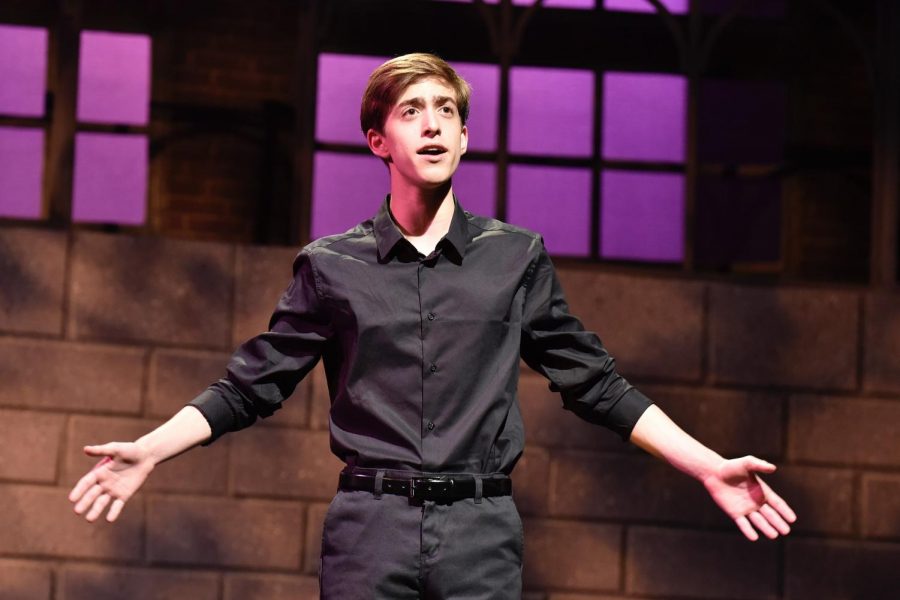 Millin performs at a summer intensive he participated in last year at Oklahoma University. Millin's love for theatre doesn't stop when the school year ends; he regularly spends his summers attending intensives or working as a counselor at the Imagination Stage Summer Camp.

When junior Matthew Millin was five years old, he was sure he had stage fright. Even though he’d grown up putting on shows with his cousins for his family—they’d create a makeshift stage out of their grandparents’ brown leather couch and take turns singing songs—he was sure if he tried theater he’d be unable to perform.

Millin’s dad actually had to push him into participating in his performance, Millin said. But since that first show in second grade, at the Jewish Community Center in Tenafly, New Jersey—where Millin lived prior to moving to Bethesda—he’s never looked back.

A few weeks ago, Millin stood centerstage as the lead singer in “Mayor of Simpleton”: one of the four talent show acts he was in. With all eyes on him, Millin exuded confidence and charisma; after hitting the final note, he threw his hand in the air and broke out in a huge grin.

After six years participating in mostly Imagination Stage productions, Millin stepped back from the program freshman year in favor of becoming involved with a number of theatre and music groups at Whitman. He’s a member of Men’s Chorus, Chamber Choir, Whitman Drama and two of Whitman’s a cappella groups: Solid and Sound and NOTA.

Millin has been a part of every Whitman Drama production in the last three years in some capacity, whether performing or working on tech, and he often takes on major roles. Most recently, he played Prospero in Whitman Drama’s “The Tempest.”

In every show, Millin prepares to embody his role the same way: rigorous text analysis of his dialogue and lines. He’s played mostly love interests in the past, but this year he was cast as characters more outside his comfort zone—the cunning Prospero and the manipulative Leading Player in “Pippin.” Those roles are always harder to get into, Millin said.

“It was challenging for me to find the power both characters embodied, as well as finding out what makes them tick and how they are so hyper-focused on what they want,” Millin said.

Millin’s involvement in so many groups has helped him foster many close relationships. Millin’s talents are “simply a joy” to watch on stage, chorus teacher Jeffrey Davidson said. Junior Emily Mayo frequently works with Millin, spending time with him both on and off the stage. In “The Tempest,” she played Ariel—the daughter of his Prospero.

“He’s really fun to watch on stage because he really, really cares about it,” Mayo said. “You know he’s going to be on top of it—he’s always going to come into the scene having put a lot of thought into it. You always come out of scenes with him feeling like a better actor from having worked across from him.”

Millin loves the community aspect of theater, he said. He said productions are like a “giant system,” where every member is essential to the process.

“It’s very centered around collaboration. The performers, creative team, tech—everyone has to be working together,” he said. Millin also appreciates how spontaneous theatre is. No two shows are ever the same, he said. He describes theater in three words: demanding, exhilarating and freeing.

“It’s exhilarating in the first few moments when you still have the pre-show nerves and you realize there are people watching and you’re actually doing it. Your heart is pounding, and it’s exciting,” he said.

More broadly, Millin sees theater as an avenue for creating change and expressing his views. During his freshman year, his first Whitman Drama production Jesus Christ Superstar coincided with the presidential election. The company expressed many of their thoughts on this national event through their performance, Millin said.

“Throughout the process we were incorporating different things happening in the world, our frustrations and different movements,” he said. “Through the production, we were all able to vent our feelings about a lot of problems and things we wanted to change.”

Matthew plans to continue to be involved with theater after high school, he said.

“Theater is a core part of who I am, and I aspire to be a part of that community and profession that moves people, brings them joy and opens their eyes to the world around them,” he said.