The Black and White • April 22, 2019 • https://theblackandwhite.net/63870/opinion/hands-up-dont-shoot-belongs-to-the-black-lives-matter-movement/ 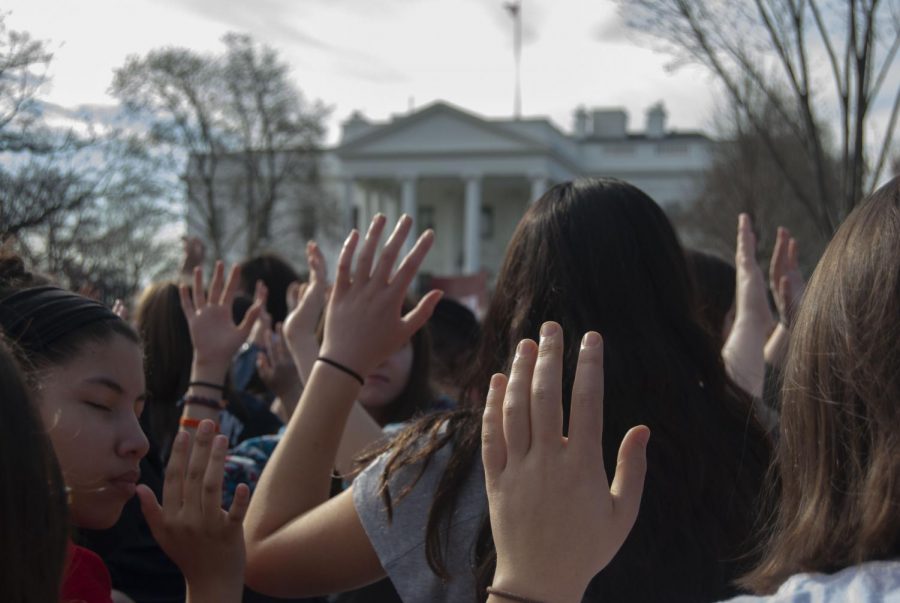 Students hold their hands up to indicate, "Don't shoot", during the March 14 walkout for gun control. The gesture originated after the 2014 shooting of Michael Brown and has become as a core symbol of the Black Lives Matter movement.

“Hands up, don’t shoot.” This slogan, along with the accompanying gesture of raising one’s hands above his or her head, became one of the core symbols of the Black Lives Matter Movement after unarmed 18-year-old Michael Brown was fatally shot by a police officer in Ferguson, MO, in August 2014. Brown reportedly was holding his hands above his head and mouthing the words “don’t shoot” as the fatal shot was fired; while this claim was later debunked, the image has stuck. Since, the mantra has been used in protests against police brutality around the country.

To black people like myself, this gesture symbolizes a decades-long struggle for our right to come out of interactions with law enforcement alive. It symbolizes the fear and panic we feel every time we so much as see a police officer in the street or get pulled over for speeding.

So when I saw march leaders and participants at the walkout for gun control March 14 widely using the “hands up don’t shoot” gesture, I was outraged. During the 17 minutes of silence to honor victims of gun violence, representatives from MoCo Students For Change (MC4C) prompted protesters to put their hands up; some students had the words “don’t shoot” written on their hands. Ignoring its deep meaning and history, MC4C took this gesture and generalized it to the gun control movement as a whole.

Applying the “hands up don’t shoot” symbol to the wider fight for gun control screams ignorance, and its use out of context is damaging to the Black Lives Matter Movement. Organizations and individuals protesting for broad gun control reforms should be conscious of this gesture’s significance and avoid its use.

The Black Lives Matter movement was created in 2013, after the fatal shooting of African American teenager Trayvon Martin. The movement picked up speed after George Zimmerman, the neighborhood watch coordinator who shot Martin, was acquitted. Zimmerman later sold the gun he used to kill Martin for $346,000. Since the tragic shooting, the Black Lives Matter movement has expanded to 27 chapters in 14 states, DC and Ontario. It’s been at the forefront of many protests against police brutality. In an official statement, the movement affirms they are “working for a world where Black lives are no longer systematically targeted for demise.”

The prevailing issue of police brutality is close to the heart of every black person living in America. We’ve watched juries acquit police officer after police officer for their crimes, watched the media vilify the victims and watched the public make excuses that all say the same thing: the color of our skin is grounds for murder. Our movement already has difficulty getting the same type of media attention gun control has recently received; the last thing we need is having one of our iconic gestures hijacked.

The gesture’s use out of context perpetuates misinformation about the intent and history connected to the Black Lives Matter movement. The movements for gun violence prevention and for preventing police brutality have some overlap, but they aren’t the same. MC4C and the students walking out weren’t protesting police brutality, but rather easy access to guns for those who shouldn’t be able to buy them—known abusers, those with severe mental illnesses and people with a criminal record. Black Lives Matter, on the other hand, has become synonymous with ending the unjustifiable murder of black people by the police. The movement was not founded to fight gun violence as a whole.

The gesture’s use to broadly protest gun violence also dilutes its meaning. When groups with differing movements and desired outcomes steal iconic gestures, they take attention away from the gesture’s intended use. Black Lives Matter already faces its own roadblocks. The movement has no national marches, gets astonishingly little press and lacks Congresspeople to speak at demonstrations to show their support; the apparently radical topic of police brutality is normally met by vague words or ignored by politicians entirely.

As a black teenager living in the U.S., I watch with distress every time another black teenager is shot and killed by the police, and instead of justice, the victim is insulted in their grave. I look at the carefully selected mug shots of the victims, and I cry as I realize they look exactly like my older brother—unkempt hair, baggy clothes and a serious face. I cry as I realize that these common characteristics have been used as motive for the murder of my people.

MC4C members said in an interview after the march that they viewed the gesture as more broadly related to gun violence protests, claiming they simply did what anybody would do if a gun was pointed at them. Appropriating a gesture that symbolizes the struggle of every black person living in our racist society showed the naivete of MC4C’s leadership and of many of the students marching. But beyond that, this mistake provided an important reminder that when protesting, it’s crucial we stay aware and respectful of other movements. Before “harmlessly” stealing a gesture, we need to realize that we’re also stealing a movement.