The Black and White • April 14, 2019 • https://theblackandwhite.net/63844/news/students-discuss-equity-in-schools-at-second-county-council-sponsored-conversation/ 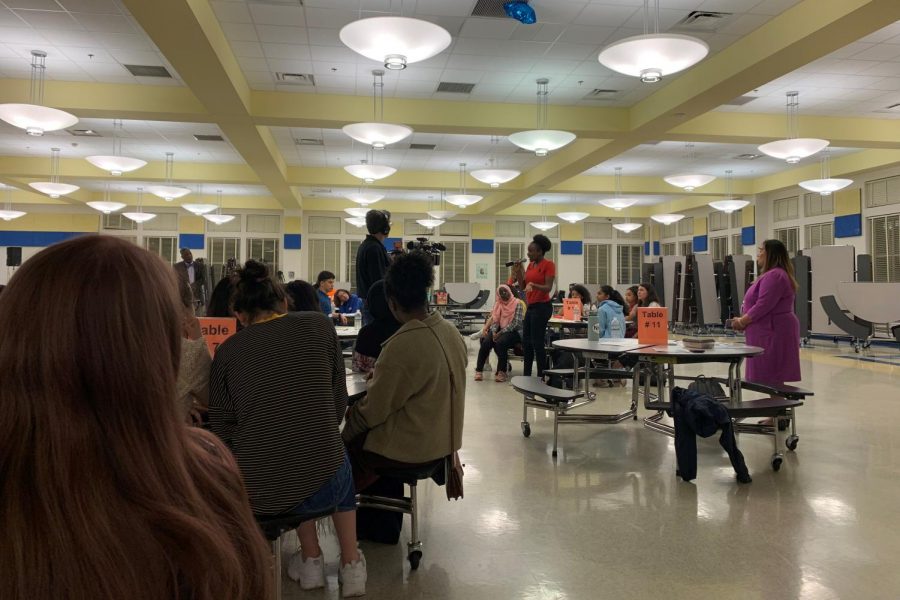 A student speaks during inter-group discussion at the County Council-sponsored meeting on school equity April 8. Around 75 MCPS students attended the event.

Local students, educators and politicians held a second County Council-sponsored conversation about racial equity at Gaithersburg High School April 8. Unlike the first meeting, which focused more broadly on equity in all aspects of life, this conversation was specifically targeted toward discussing equity in MCPS schools.

Around 100 people attended the meeting, with students making up around three-quarters of the audience. Most student attendees were high schoolers who had heard about the event through organizations like MoCo Students for Change, which had encouraged its members to attend. Students who came to the discussion were eligible to receive three SSL hours.

Student Member of the Board Ananya Tadikonda attended the discussion, as did SMOB candidate Zoe Tishaev, a junior at Clarksburg High School. As with the previous meeting, Council president Nancy Navarro opened up the event. Several county officers were also in attendance.

The meeting began with a series of short, introductory speeches from county officials. Then, students were presented with several questions regarding equity, and they voted to discuss four of them. The bulk of the time was made up by group discussions of the questions. After an hour or so, students shared their groups’ answers.

Students spoke about the need for more diversity in schools and the disparities between wealthier, whiter schools and poorer, majority-minority schools, in areas ranging from testing to the condition of schools.

“Students feel like they’re already set up to fail,” she said.

Both in small groups and in a broader discussion, students expressed concern about a Bethesda Beat article concerning an April 4 county meeting where parents allegedly used racially-charged language to criticize a proposal to redraw school boundaries to limit de-facto segregation. Students at the meeting were overwhelmingly in favor of redrawing school boundaries to increase diversity.

Whitman and other largely-white “W” high schools—Wootton, Walter Johnson and Winston Churchill—came under sharp scrutiny. Many students said they feel those schools are unfairly favored and resistant to becoming more diverse, and Tishaev had direct words for Whitman students hoping to shake this narrative.

“Come out and testify,” said Tishaev. “Talk about how you also care about diversity. Nothing destroys the narrative that ‘we don’t want them in our school’ more than having students in these W schools saying, ‘No, you’re wrong, we do want more diversity in our schools.’”

This meeting marked the last of the series organized directly by the County Council.