The Black and White • April 13, 2019 • https://theblackandwhite.net/63839/feature/i-scream-you-scream-its-sarahs-handmade-ice-cream/ 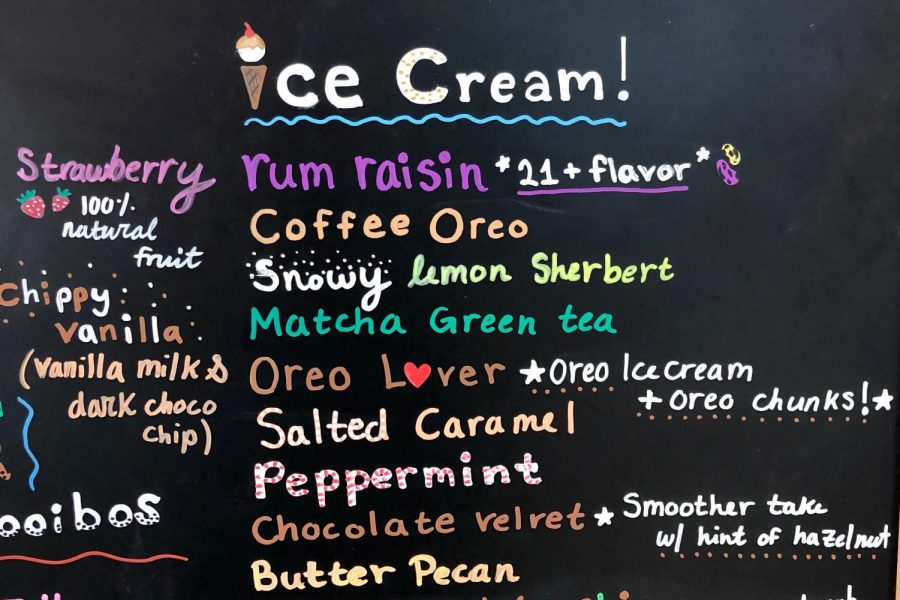 Sarah Park, the founder and owner of Sarah’s Handmade Ice Cream, creates her own unique ice cream flavors using natural ingredients. She makes her ice cream by hand with machines she keeps in the back of her shop.

On March 7, Sarah’s Handmade Ice Cream replaced the long-standing ice cream shop, Wow Cow, in Bethesda’s Westwood shopping center. Sarah’s Handmade Ice Cream—a family business—is the new neighborhood hotspot; it’s only been open for about a month, but the shop is nearly always packed. I spoke with Sarah, the owner; her daughter, Annie; and Sarah’s partner, Rollin, to talk about their new business.

After eight years and one week, Sarah Park sold her Prince George’s County delicatessen—the one she opened after years of working multiple jobs to provide for herself and her 28-year-old daughter, Annie. Since immigrating to Montgomery County from South Korea in 2000, she has been a waitress, a cashier, a Lord and Taylor employee and has delivered Korean newspapers to households each morning. Last June, she thought she was ready to retire. But after three months jobless, it became clear she wasn’t.

“I felt like ‘oh, my god, am I really retired?’” Sarah said. “‘Uh, probably not.’ I started researching what I really wanted, and one of my neighbors said ‘Sarah, your ice cream is the best. Do the business.’”

“The “business” turned into Sarah’s Handmade Ice Cream, a Bethesda ice cream and bubble tea shop that replaced Wow Cow March 7. Sarah is the owner and chef, Annie is the front of house, and Rollin Amore—Sarah’s life partner—is the handyman and helps with the business side of things (he’s a financial advisor during the day). Each night, after the family leaves around 10:30 p.m., they head to Sarah and Rollin’s Chevy Chase house to discuss the day.

“Once we go home, with a glass of wine, the three of us talk,” Sarah said. “It’s not necessarily business talk, because we end up always [talking] about ice cream.”

Sarah was born in South Korea in 1961. While she was growing up, it was rare for Korean women to pursue education past high school, but Sarah and her five sisters all earned bachelor’s degrees. Sarah said she largely attributes this to her dad’s constant support and sacrifice. He encouraged his daughters to read and wouldn’t allow them to watch television, though radio was permitted.

“We would always complain, and my dad said ‘only stupid people watch TV,’” Sarah said. “‘Smart people read books.’” She laughed. “Something like that.”

In Korea, Sarah worked as a journalist, writing for a daily newspaper. It was hard work, and she often slept in the newsroom to make deadlines. Once Annie was born in 1991, she knew she wouldn’t be able to raise her daughter and continue working for the paper. So she quit. She began to freelance.

Eventually, Sarah said she came to realize that she didn’t want her daughter to grow up in such a male-centric society, so in 2000, she immigrated to America. Because she had a cousin in Maryland, Sarah moved to Montgomery County, where she has remained since. Annie grew up attending Tilden Middle School and Walter Johnson High School.

The family’s first few years in America were tough; Sarah worked as a cashier in a deli, making only $8.50 an hour. She eventually had to pick up extra jobs, sometimes working three at once, to pay bills and pay for Annie’s violin lessons. She attended evening classes at Montgomery College to learn English, all while focusing on Annie’s education.

“My number one goal was to educate her,” Sarah said. “I tried my best to raise her well. I never relied on any man, and I teach her to do that. I don’t know if I’m a feminist or not, but I’m a strong woman.”

Now, Annie teaches writing and violin at Montgomery College. She works with a lot of immigrants: people just like her mom, who recently came to America for a better life and are slowly tearing down the language barrier.

“It’s funny how that’s evolved,” Annie said. “She’s been a great partner and role model in learning how small businesses work. Watching how she finds little joys in the things that she does has been really inspirational.”

And Sarah does find little joys: chatting with customers, pistachio ice cream and working closely with her family every day. She started making ice cream with a small kitchen ice cream maker as a hobby, just vanilla and strawberry for Rollin. Eventually, she started sharing with her neighbors as well (“I don’t want him to eat too much,” Sarah said).

Now, Sarah sells not only the expected vanillas and chocolates but unconventional Asian flavors like Matcha, Thai tea and Korean pear. To come up with flavors, Sarah scours the internet, visits other ice cream shops and consults her many cookbooks. For each flavor, she makes five or six different recipes and combines the best elements of each to create her own signature recipe.

“She has a very good sense of putting foods together, which flavors work together,” Rollin said. “She’s very creative in that regard. And so far, she’s made some great ice creams.”

Annie, who has loved to travel since her semester abroad in Spain, often finds tastes or trends in other countries and brings them home to her mom. When she stopped in Bali during a four-month backpacking trip, she noticed how successful restaurants with vegan options had become. And when she travelled to Japan and Hong Kong, she noticed the popularity of bubble tea. She brought the idea to Sarah and now she and her mom brew bubble tea to sell in their own shop. They brew the tea hot, cold or loose-leaf, without any artificial syrups, and they even make cashew and almond milk for people who can’t have dairy.

“She always inspires me, saying ‘mom, we should try this or that,’” Sarah said. “We didn’t have it back in Korea—just hot tea.”

Their philosophy of no artificial flavors or colors holds true for most of their ice cream flavors as well; instead of using red food coloring for strawberry ice cream, Sarah uses beet powder. She has to be careful, though—too much powder means the ice cream tastes less like strawberries and more like beets.

“Once I start something, my goal is always to be perfect,” Sarah said. “I want to make the right thing, serve the right thing. Health and good ingredients—that’s important.”

The first flavor the family made in their factory was mango sorbet to test out the machines. The second flavor was chocolate velvet, a rich hazelnut chocolate that Sarah invented.

“Or was it oreo?” Rollin mused.

Not many shops make their own ice cream anymore. The machinery is expensive, and the process is time consuming. Sometimes, Sarah comes to work at seven in the morning and doesn’t leave until 11 at night. But she loves it. In the future, she might consider expanding, but for now, she just wants to appreciate selling ice cream with her family.

“I just want to enjoy being here,” Sarah said. “I want to enjoy my life. I always work hard. I’m always a positive person. Whatever I do, I always put 100 percent in.”

The shop will host a grand opening April 13 and 14 to officially announce their opening. They plan on having face painting, music and, of course, ice cream.

“You can tell that there’s passion there,” said employee Emma Neuffer, a senior. “I mean, it’s really hard for people to be unhappy when they’re eating ice cream.”

But Sarah isn’t just in it for the ice cream. She’s also in it for the community. She wants to be a friendly neighborhood face; she loves chatting to customers and putting her own spins on classic flavors. She likes seeing kids smile, cones in hands.

“In Korean, the word ‘family’ means ‘people who eat together,’” Annie said. “There’s something about food that just brings people together, and being able to share that is something that inspires her.”