The Black and White • April 4, 2019 • https://theblackandwhite.net/63679/sports/boys-lacrosse-defeats-churchill-for-first-time-in-11-years/ 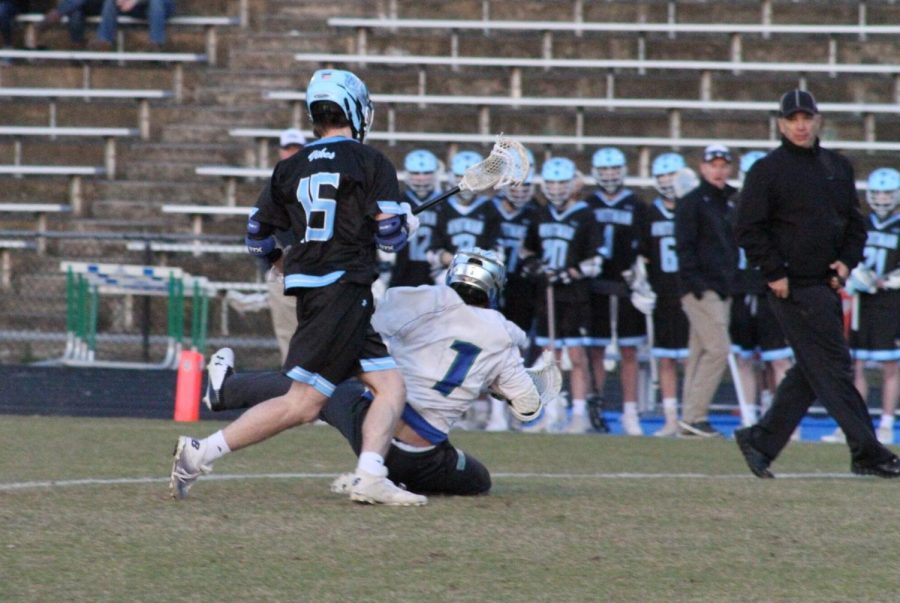 Midfielder Harry Sikes checks a Churchill player to the ground. The Vikes beat Churchill Monday for the first time in 11 years.

The boys lacrosse team (4–1) took down the Churchill Bulldogs (1–1) 9–7 in a back and forth battle Monday night.

“It felt great,” captain Peter Roegge said. “I think as a team this year we knew we had a great chance to beat them, and we took advantage of that.”

The Vikes dominated possession in the first quarter but couldn’t find the back of the net. The Bulldogs capitalized on their scoring opportunities and took a 2–0 lead heading into the second quarter.

The teams traded goals in the second quarter, and the Vikes trailed 4–2 with one minute remaining in the half. With 50 second remaining, attacker Lucas Hilsenrath scored for the Vikes to cut the deficit to one heading into the third quarter.

The Bulldogs got off to a hot start in the second half, scoring two goals to put them ahead 6–3. But the Vikes stormed back, scoring four unanswered goals to take a 7–6 lead with five minutes remaining in the game.

Late in the fourth quarter, Churchill attacker Tom Langerman thought he’d scored the game-tying goal, but it was called back because he was in the crease. The Vikes added another goal with four minutes remaining in the fourth to extend the lead to 8–6, and Churchill responded with about three minutes left to get within one, making the score 8–7. In the final minute, midfielder Harry Sikes put the game away by scoring an empty-net goal to seal the Vikes victory 9–7.

“I knew we had just won the game right there,” Sikes said. “Finally beating Churchill was an incredible experience that I always wanted to share with my team.”

Head coach Tommy Rothert said it was a great win for the team and will hopefully carry them into big games moving forward.

“This win should be a confidence booster for the team, but we need to stay humble. There is still a lot more season left,” he said.