The Black and White • April 3, 2019 • https://theblackandwhite.net/63665/news/mental-illness-awareness-seminars-to-take-place-in-classes-next-week/

Seminars put back on schedule after students protest their removal 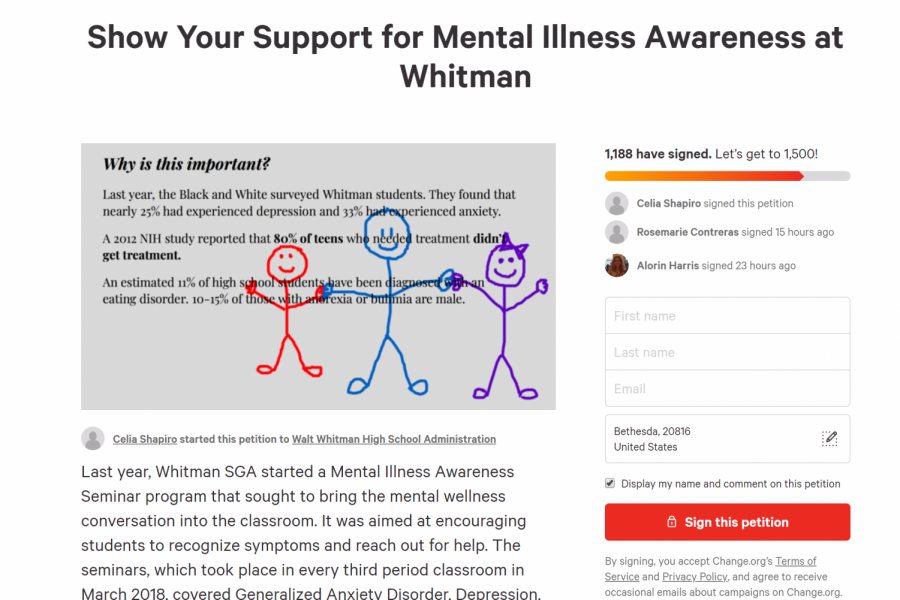 Students will present mental illness awareness seminars in third period classes next week. The seminars—organized by the SGA—were nearly cancelled after administration pulled support from the program March 22, but they were quickly reinstated after an outpouring of student anger at the decision.

The SGA started the seminars last year in an effort to create a more open dialogue among students about this difficult subject. Last year’s seminars—also given in third period classes—focused on depression, anxiety and eating disorders, and they featured both an informational presentation and students speakers who shared their own experiences with mental illness.

This year’s seminars will again feature student speakers and briefly cover these same mental illnesses, but will focus more on Obsessive Compulsive Disorder and Bipolar Disorder. The decision to change the focus of the seminars was made in response to feedback from students who wanted to learn more about lesser-known mental illnesses, SGA vice president Celia Shapiro said.

In January, the SGA agreed with administration to tentatively schedule the seminars for April 29 to May 3. However, late in March members of administration expressed concerns that the seminars would take up too much class time, especially during AP exam prep, and they asked the leadership team to reconfigure the seminars into a student lecture series either during lunch or after school.

When Shapiro shared the news that the seminars had been cancelled in the Whitmaniacs Facebook group Mar. 24, students were furious. In under 24 hours, Shapiro’s online petition to bring back the seminars received nearly 800 signatures, and Instagram and Facebook flooded with messages to publicize the issue and gain support. The next day, administration put the seminars back on the schedule.

Students involved in orchestrating the seminars felt as though the request to make them optional undermined the value of speaking freely about mental health and significantly limited the number of recipients.

“It’s important for kids not to feel alone in their struggle,” sophomore Bella Brody said. “Many kids are struggling with mental health issues, and they should be addressed, not hidden.”

Shapiro felt the seminars made a major difference last year, and was glad administration decided to allow the project to move forward.

“I felt so strongly about bringing them back because of how important the mental health conversation is to the student body and how impactful the seminars were last year,” Shapiro said. “I had so many peers tell me about how the seminars truly changed their perception, made them more comfortable at school or even pushed them to get help or advocate for a friend.”