The Black and White • March 27, 2019 • https://theblackandwhite.net/63594/feature/artist-spotlight-eva-ginns-expresses-herself-through-music/ 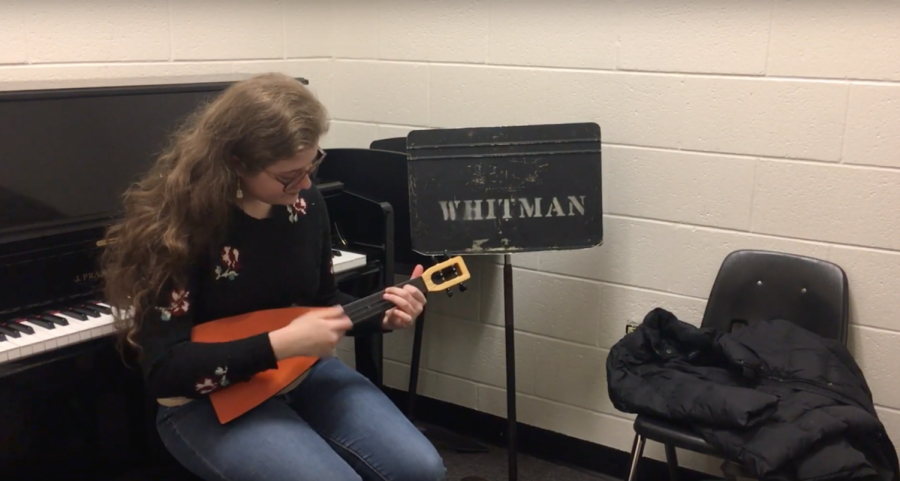 The Ginns family’s prized possession is their baby grand piano; the rare Chickering from the early 1900s has been passed down through four generations of passionate Ginns musicians. For junior Eva Ginns, the piano reminds her of the two things she loves the most: her family and music.

Out of all these instruments, Eva said she feels most connected to her ukulele because it’s the first instrument that she learned to play. She’s the founder and president of the Ukulele Club at Whitman—a ten member club that meets every month. Eva teaches club members to play new songs with the ukulele and gives them feedback on how they can improve.

“She’s good at teaching other people because she knows what she’s talking about, and she enjoys it,” co-president Kaleo Goldstein-Coleretti said.

When Eva was a newborn, her parents always sang to her “Our Love is Here to Stay.” Her mom, Lisa, said Eva started singing as soon as she could talk. Singing with her mom before school was a daily routine for Eva when she was younger.

When Eva was six, her dad taught her to play the soprano ukulele, the only instrument small enough for her to play at the time. The new skill of playing an instrument was a nice addition to accompany Eva’s singing. Later, she learned baritone ukulele, which has a lower tone and is slightly larger.

After mastering the ukulele, Eva wanted to branch out to new instruments. Inspired by her older sister April—who also plays many instruments—Eva taught herself how to play guitar and learned violin and piano. She’s currently using online videos to learn mandolin.

While many passionate musicians tend to specialize in a single instrument, Eva prefers to play many more casually.

“Because it’s a hobby, I can keep learning and keep pushing myself,” she said. “It’s something that I can use as a creative outlet without any judgment, recitals, grades or anything.”

Eva said the songs she practices often reflect how she’s feeling at the moment. When she’s upset, she plays songs in minor keys—like “She Used to be Mine” by Sara Bareilles—on the piano. When she’s happy, she plays upbeat songs by Dottie Clark on her ukulele. When she’s angry, she sings show tunes from “The Theory of Relativity.”

But while she often plays for herself, Eva also likes to perform. She sang in front of an audience for the first time at the Burning Tree talent show in third grade. After performing as a member of the ensemble in the Aladdin musical during seventh grade, she’s participated in every school musical since—sometimes in the ensemble and sometimes in lead roles.

Music also influences Eva’s school life outside of the drama department. She said playing instruments helps her organize her thoughts by giving her an outlet to express them, which prevents her from getting distracted while doing school work.

After high school, Eva plans to continue playing music as a hobby. Music will always be something that connects her family, she said.

“Music is just sort of second nature for Eva,” Lisa said. “It’s kind of a family language at this point because it’s just something people do for fun. Nobody does it professionally, but everybody has a passion for it.”